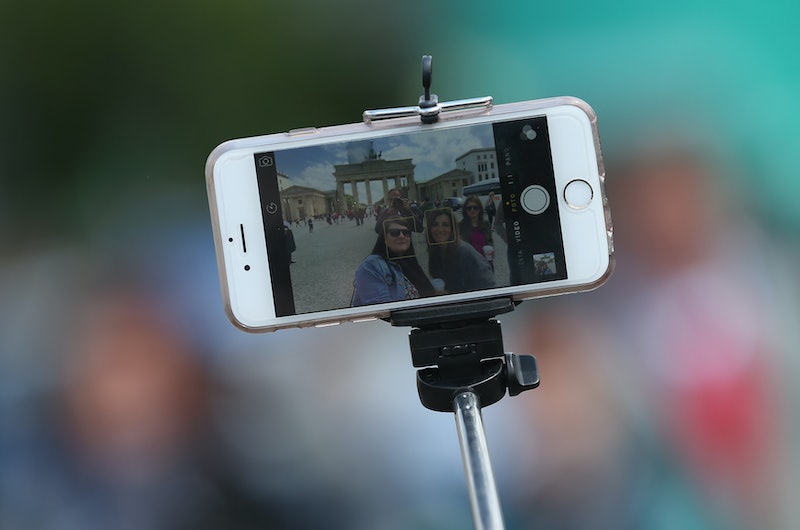 Brace your self(ies): Zana Bayne just upped the selfie-stick game in big way. The queen of all things leather, strappy, and sexually frustrating whipped up the selfie-stick harnesses worn by model Saskia de Brauw in Interview Magazine's July 2015 issue. The spread, titled simply "Selfie," centers on de Brauw busily snapping away on her cell-phone against a bleak, leafless backdrop. Perhaps distracted by her own phone, she steered off course and ended up in a not-so-enchanted forest? Whatever the case, Saskia will have pics to prove it.

Selfies themselves-ies are still quite polarizing in the world of fashion and celebrity; Anna Wintour famously banned them from this year's Met Ball, while shameless self-photographer Kim Kardashian had hers published in a coffee table book. The desert fashion show that is Coachella said no to selfie-sticks a few months ago, but in June, the reputable House of Pucci debuted a selfie-stick printed dress. Frankly, while I myself have never pulled the trigger on a selfie stick, I think Zana Bayne's harness is a much more stylish (and functional) option for wearable tech than some other popular options out there at the moment.

Worried that a selfie-stick harness might not go with your outfit? Fear not; these babies are versatile. There's a version for the waist, shins, arms, and duh, neck. And for you über popular people whose contacts, music and photos (OK, mostly photos) simply cannot be confined to 32GB, the harnesses can hold up to three phones each, allowing perfect angles and plenty of posting options.

Even though she makes a mean accoutrement, you won't catch Ms. Bayne using a selfie-stick any time soon. In an interview with Refinery29, Bayne says that she gets why they've become so popular, but a stick that's chic enough for the designer has yet to come along.

"So far I haven’t seen any that I’d be proud to carry around — maybe if there was a Pucci print on a selfie stick, and not just a print of it..." Bayne said.

The Zana Bayne versions are not for sale yet, but her harnesses can cost up to $995. If you're looking for a more affordable option, might I suggest swapping these leather babies out for a cute fishing rod rack? That would work too, right?