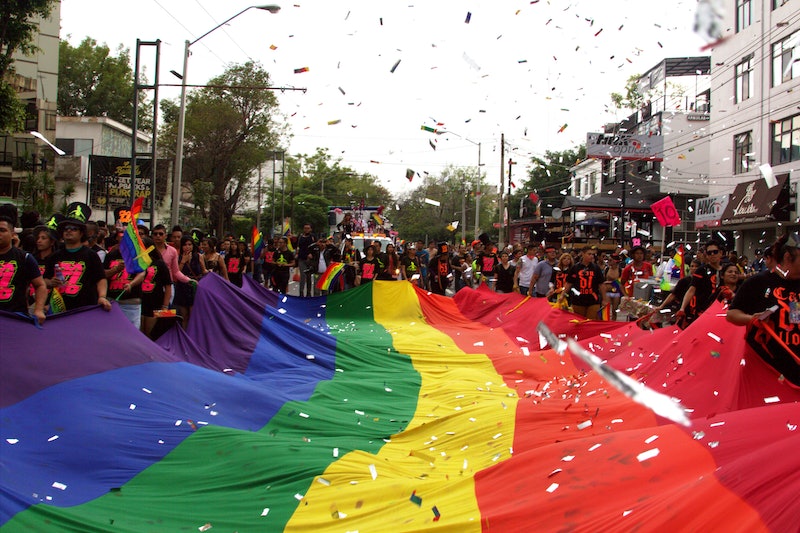 While LGBT studies has become a more common academic discipline at the university level, progressive education about the history of LGBT issues and struggles has not been a part of high school curriculum — until now. Lyndsey Schlax, a social studies teacher at Ruth Asawa San Francisco School of the Arts (SOTA), is introducing what is likely the nation's first LGBT studies high school course.Schlax says, "We'll look at what it's been like for gay men, what it's been like for lesbian women, what it's been like for transgender people." The class at SOTA will also discuss queer discourse terminology, LGBT literature, history, media representation, and current political and social events. Additionally, the course will emphasize San Francisco's queer history and community. Schlax designed the elective's curriculum along with several other professors and activists, including Barbara Blinick and Erik Martinez from SFUSD, Ardell Thomas at City College, Nan Boyd, who is a professor at San Francisco State University, and the SF LGBT Center.

SOTA also has the highest percentage of LGBTQ-identified students at a San Francisco public high school, at 28 percent. LGBTQ students face incessant bullying and abuse from classmates, starting in elementary school and lasting throughout high school. The New England Journal of Medicine recently found that these students are 91 percent more likely to be bullied than their heterosexual peers. More studies reveal that 82 percent of trans kids have reported feeling unsafe while at school, and 44 percent have experienced actual violence while at school. Forty-one percent of trans people attempt suicide yearly, and 10 to 20 percent of LGB people have reported a suicide attempt. LGBT studies courses in high schools can help combat these injustices by introducing ideas about heteronormativity, privilege, gender fluidity, sexual fluidity, etc. at an earlier age. Schlax elaborates about her eagerness to begin teaching:

"I'm excited to teach the class because in San Francisco, at SOTA, students should be learning these stories; they're 'their' stories. With LGBT studies, our students will be learning about advocacy, being a good ally, and the history that shaped San Francisco and the LGBTQ community... In the next few weeks the Supreme Court will announce their decision about marriage equality, and I get to teach the history as it's happening. It can't get much more exciting than that!"

And just this morning, SCOTUS finally ruled that gay marriage is now a Constitutional right, declaring bans anywhere in the country illegal! This day is thrilling, just, and historic, but the course's focus on advocacy and history means that students will spend as much time learning about LGBTQ struggles beyond same-sex marriage, especially ones that don't get as much attention from the mainstream movement. Schlax told Bustle that the course will incorporate the movement's origins and diverse queer experiences. Schlax says, "The second semester of the year will be ethnic studies, so there's a good connection to ensure intersectionality is addressed and the course really is inclusive!" There are so many important issues that must be discussed in an LGBT studies course, including justice for queer people of color and queer immigrants, the need for improved health care access, and the frequency of violent hate crimes killing queer and trans people. While this is far from a complete list, here are three lessons that should be covered in the curriculum:

As stated by Queering the Feminist Lens, "The first Gay Pride was a riot." Respectability politics within the mainstream movement often deradicalizes the inspiring origins of LGBT liberation. The modern LGBT rights movement as we know it could not have begun without the drag queens and trans women of color who led a revolt against homophobic, transphobic, and violent police at Greenwich Village's Stonewall Inn on June 28, 1969. This incident sparked the Stonewall Riots, marking "the first time the LGBT community fought back" against laws declaring homosexuality illegal, "and it was brilliant." Stonewall Inn became a historic landmark earlier this week.

It is especially important to acknowledge and honor the role of trans women of color in LGBT history considering how they are oft ignored by the mainstream movement. Erasure of trans identities and issues by much of the queer community was again exposed just this past Wednesday when Jennicet Gutiérrez, an undocumented trans Latina immigrant, bravely and fiercely interrupted President Obama's speech at a White House LGBT Pride event. When Gutiérrez interrupted Obama "to call for an end to the deportations of LGBTQ undocumented immigrants" — an extremely serious, life or death issue — the President made jokes at her expense in an attempt to shame her. As if that's not infuriating enough on its own, the room, packed with LGBT activists, began to boo Gutiérrez. In this instance, the mainstream LGBT community actively turned their backs on their queer sister. It's shameful, and it represents a willingness to minimize other trans issues, such as lack of health care access, poverty, (trans folks are four times more likely to live under the poverty line than straight or LGB folks), and hate crimes (seven trans women, many of color, have already been murdered this year alone — and this statistic only represents the victims who have been reported.) Elevating these issues in the class, especially in context with the SCOTUS victory, is absolutely necessary.

A report by The Palette Fund, True Colors Fund, and the Williams Institute found that almost half of homeless youth (40 percent) are LGBT, and over half of that LGBT homeless youth (68 percent) became homeless after being forced out of their homophobic and transphobic families' homes. Employment discrimination, in which gay and lesbians can legally be terminated from employment due to their sexuality, exists in 28 states. The severe economic struggles of trans peoples was mentioned earlier, and LGB folks are also more likely to be economically marginalized by living below the poverty line — a problem that worsens if they are people of color.

While this exciting, historic class — and all of us — should celebrate marriage equality, we must continue to fight the injustices that the LGBTQ community still battles everyday through education and action. Thanks to Ruth Asawa San Francisco School of the Arts, progressive education will begin earlier in students' lives, and hopefully spread to high schools across the nation.