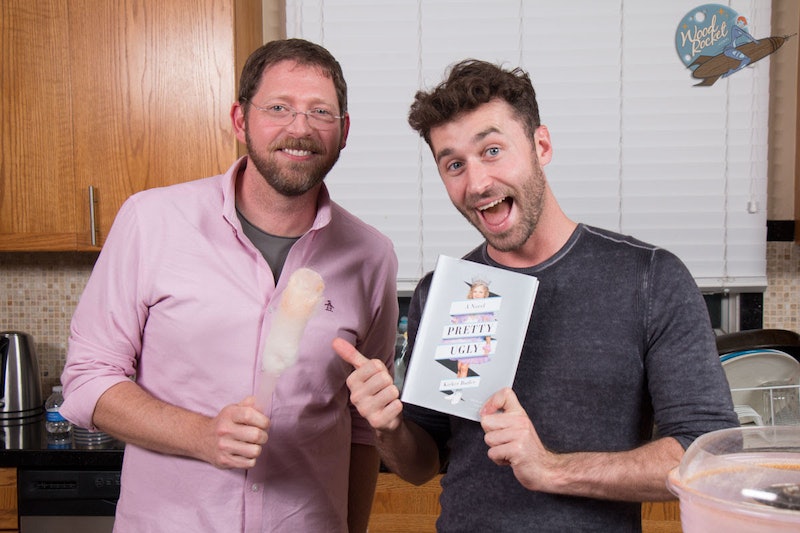 Season three of porn star James Deen's food show is here, and it's as mouthwatering as ever. For the uninitiated, James Deen Loves Food is a weekly online show sponsored by WoodRocket.com that features a rotating cast of guests and food themes. How much nudity and/or sex can you expect from a program hosted by adult film's favorite hunk? Let me break it to you gently: the only penetration you're going to see is a melange of offbeat treats entering Deen's mouth. However, his charm and megawatt grin are full frontal, and you get to see him concoct and eat bizarre edibles — which is kind of a kink unto itself, right?

On this week's episode, Deen whips up a variety of weird cotton candy creations with his guest, writer Kirker Butler. Experimenting with everything from Werther's Originals and Life Savers to taco powder, hamburger seasoning and sriracha sauce, these two go nuts with candy floss while chatting about Butler's new book about child beauty pageants, Pretty Ugly. The show clocks in at under 15 minutes, so you can get in a SFW quickie on your lunch break and satisfy your oddball food cravings, too. But if you're still not satiated, here are three facts about Deen to uh, fill you up.

Deen is generous both inside and outside the bedroom. Last October, he donated half the earnings from his website to breast cancer research, and helped raise $15,000 for AIDS research.

2. His Favorite Stars Wars Film Is...

According to this episode of James Deen Loves Food, The Empire Strikes Back tops his list of favorite Star Wars films. Don't deny — he could melt ice planet Hoth in a hot second.

3. You, Yes You, Have A Shot At Shooting With Him

Just like the NYU sophomore who got her shot at shooting a scene with Deen, you, too can have a chance to tangle the sheets with this dream machine if you just apply here.