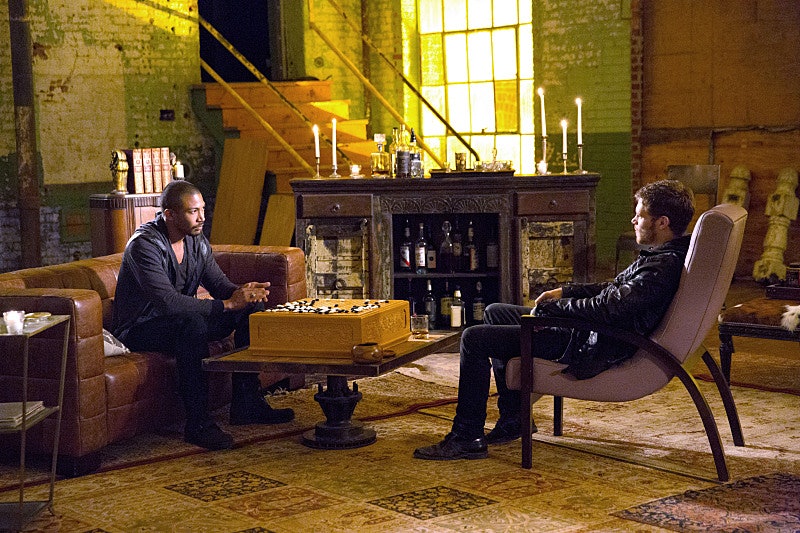 When you think of television's greatest besties, who do you think of? If you're anything like me, it's probably Lucy and Ethel, JD and Turk, maybe some Carrie and Miranda thrown in there. All excellent friends, all well deserving of the BFF crown. But I've got another pair to add to the list and I don't think anyone could possibly fight me on this (and if you can, please don't tell me. I'm a lover not a fighter): The Originals' Klaus Mikaelson and Marcel Gerard are the greatest BFFs. Sure, the whole point of the show started with Klaus showing up in New Orleans dead set on taking away the vampire empire that Marcel had spent the last couple of decades working his tail off to create, and Marcel once tied Klaus down in his own house and commanded an entire pack (seriously, like hundreds) of vampires to overpower and kill him, but that doesn't mean they don't love each other.

In a show packed with romantic drama coupled with violence it's nice to have some solid friendship mixed in, and, despite their fights, Marcel and Klaus are The Originals' true best friends. The show has been heavy on their fighting lately, so I am officially calling for more bro-time in Season 3, because when you get right down to it, these two have been there for each other for decades, and that's just the start of why they are the best when they're getting along.

Starting back in the awful days of slavery, Klaus stepped in and freed Marcel from his abusive master, and then raised him like his own. He even named him Marcellus since it means "little warrior." Come on, that's pretty cute right there.

They fight a lot, that's clear. But, that's only because they are so well-matched, which is really saying something for Klaus who can pretty much kill anyone. If they're battling for the streets of New Orleans, or just in a game of chess, they are constantly out-thinking the other.

Even when they are fighting they are always giving each other advice on witches to stay away from or girls that are nothing but trouble — they often ignore each other, but the advice is always solid.

4. They're Big On Bros Before... Bartenders

Because Tammi is most certainly not a hoe as the typical bro credo goes, but she does have a quasi-love-triangle going on with Klaus and Marcel. Both men have stepped back from her, knowing it would just complicate things. Why? Because they love each other more than they love a new relationship. Bros.

In a million different ways. There's the father/son angle and also the brothers angle. It's not just because they are forever young together, but Marcel and Rebekah are super in love (even if they're not together), which adds a layer. In many ways, Marcel is more of Klaus' brother then Finn or Kol, much to their dismay.

6. Neither Of Them Are Scared

Both of these guys are terrifying in their own right (remember when Marcel straight up murdered Sophie in the streets just because she did a little magic?), but they don't scare the other, which they both need in order to stay in check.

Let's not forget that Klaus sired Marcel (even if he didn't want to turn him), forever linking them. Between that, their family history, and their obvious love for each other, it makes them great friends. They are better allies than enemies, and I hope we get to see a little more of that soon.