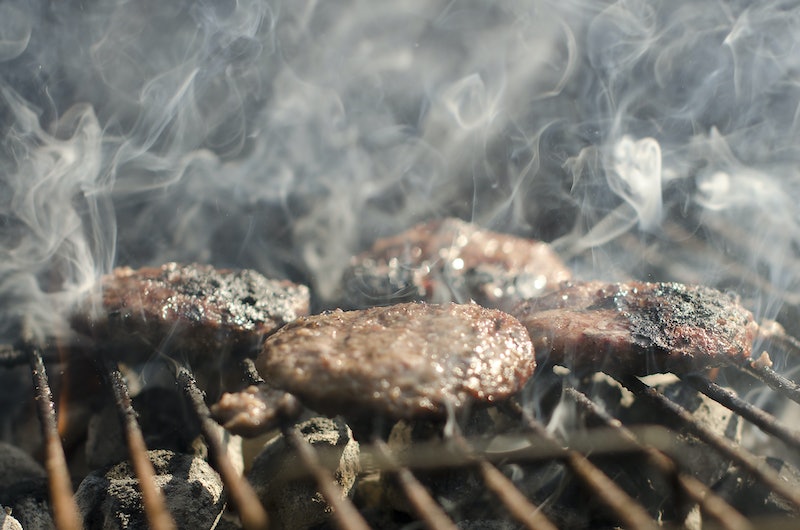 So you are trying to figure out how to crash a Fourth of July barbecue raging over at your neighbor's house, hm? I get you. When you can sense a barbecue is brewing, things start getting a little cartoonish — aroma lines from the delicious barbecue waft over to your yard, drawing you in to the party like a woman possessed. Suddenly, the only things that'll keep you focused are cheeseburgers and hot dogs. You were going to make some spaghetti for dinner, but now? Spaghetti is for suckers. Burgers are where it's at.

However, there's something blocking your goal (which is to eat 90 burgers like a champion). You weren't actually invited to the neighborhood barbecue, so it might be a little awkward to just show up and steal the grub. Especially because, you know, you see these people on a weekly basis. You participate in neighborhood yard sales together, and gossip about the shady neighbor who lives with his mom and never seems to leave the house. "It's a shame," you say about this young, pimply stranger. "If only he was in a good relationship, and wasn't so dependent on his mother. Sigh."

There's definitely strategy involved if you're interested in crashing a barbecue. The only problem is that you need to execute the steps flawlessly, to not arise suspicion that the barbecue is the sole reason you're suddenly showing your face. If you want to crash like a pro, here are a few guidelines to ensure that your approach doesn't make you look like the new jerk on the block:

1. Find a way to check out the area

Take your dog out for a walk, or put on some workout clothes and make it look like you're going for an afternoon jog. I mean, you bought those clothes three years ago, so you might as well wear them once.

If the neighbors have thick fences, it'll be even more difficult for you to "randomly" be noticed. If you have a relationship with the neighbor, try to think back to old conversations. Were you discussing new books? Is there a book you have, that you think she might like? Whatever it may be, it needs to seem non-barbecue-related.

If you're on a super friendly basis with the neighbor (or even consider her to be a buddy) this will be even easier. Chances are, random drop-bys are natural based on your relationship. Just make sure not to hold a grudge over the fact that you weren't initially invited. After all, who knows what kind of guests lurk inside. A husband's boss and colleagues? Her weird friends from the community pool? A foreign uncle who barely speaks English? It's a toss up.

Note: If your goal is to crash a random barbecue, and you don't know anyone involved, it'll have to be located in an open area, like a park. You don't want to have a trespassing charge on your record by just walking into someone's home uninvited. Find an event large enough so that you'll be able to blend in. If they're all wearing the same t-shirt (like, since they all participated in a July 4th Walk-A-Thon moments earlier), make sure to find a shirt that at least matches the color convincingly.

You know it's happening, but nothing you say should focus on the barbecue. Be oblivious. Otherwise, your cover will be blown. In this scenario, the barbecue is an afterthought. Like, "Hey Jane, I wanted to know if you saw that movie Spy in the theaters. There was a scene in there that I thought you'd absolutely love. Because it reminded me of that thing we talked about, and laughed about, after drinking all that wine last week. I don't want to tie you down, though — looks like you have something going on."

Jane will then be like, "Oh, we have some people over to celebrate the 4th. Do you have any plans?"

From there, you need to keep your cool. You don't have plans, but would hate to impose. Jane will then do the "Oh, no, I insist!" verbal dance, and then you're in. This works, since it looks like you're doing her a favor by showing up and eating all of her food. It's a total win.

3. Apologize for your shortcomings

Obviously you were a new add to the barbecue, so you couldn't have made a pasta salad to bring, and obviously you have no beer on hand. Being gracious will not only inspire others to share their products, but it'll also add a little mystery to the gathering. "Who is this person who just showed up? Obviously they must be cool, if Jane insisted they come."

Bam. You're now the most important person at the barbecue, since you're fresh and haven't heard Jane's cousin's really terrible celebrity impersonations yet. You will, but — try to spare his feelings. He really has his hopes set on landing a spot on Last Comic Standing, and he's too young to hear the truth. Shove the awkwardness aside, since it's time to eat corn!

Note: If you're still intent on crashing a stranger's barbecue, it's best to remain silent. Don't try and make yourself stand out, since then there will be whispers of "Who's that girl with the mustard stain on her tank top? Does she know she's trying to have a conversation with so-and-so's deaf aunt?" Also, avoid doing something that would ruin the barbecue, like pretending to know how to grill, or passing out drunk. Anything that could end with an ambulance ride, avoid doing.

This step is important for both friend barbecues and stranger barbecues. With the friend, it'll add goodwill to the relationship. Jane will be like, "Man, what a good friend. I should have invited her all along." With a stranger, it might lead to a brief "who are you?" moment, but you should probably be planning your exit around this time anyway. Just say "Oh, I'm just a friend who tagged along."

If things get weirder (for example, "friend of who?") use a name that's sure to belong to someone, like Mike. If there are zero Mikes at that barbecue, just run. Run far, far away. You got your burgers out of the deal, and soon this will all be a distant memory.

More like this
15 Black-Owned Liquor & Wine Brands To Add To Your Bar Cart
By Alexis Morillo
12 Aphrodisiac Desserts To Spice Up Your Valentine’s Day
By Kaitlyn Wylde
16 Trader Joe's Appetizers That Are Total Party-Pleasers
By Kaitlyn Wylde
Courteney Cox & Laura Dern Proved Their BFF Status With Matching Tattoos
By El Hunt
Get Even More From Bustle — Sign Up For The Newsletter
From hair trends to relationship advice, our daily newsletter has everything you need to sound like a person who’s on TikTok, even if you aren’t.