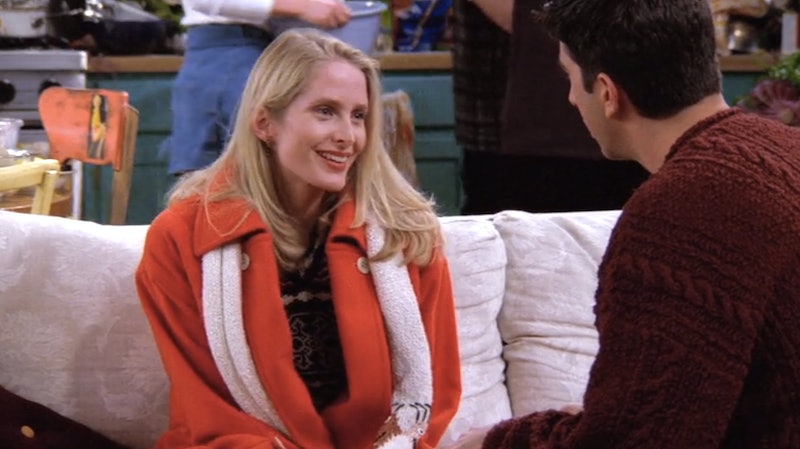 Looking back on old television shows or moves that aired a decade or two ago can be uncomfortable; it's happened to me many times that, watching something I used to love, I've been jarred by some shows' outdated and inappropriate commentary that would never air today. But one show that championed the Love Is Love concept long before its contemporaries is Friends, and I want to call Marta Kaufman and Co. out for a moment. It seems like the perfect time, now that members of the LGBT community nationwide have just been granted the freedom to marry in any state in the US, to commend the show's writers on the progressive, inclusive, downright impressive decision to include the character of Carol Willick from day one of the series.

In case you don't obsessively re-watch the show in syndication or on Netflix like everyone else on the planet, Carol, played by actress Jane Sibbett, was married to Ross Geller, but, as we learn in the very first episode, she ultimately left him for a woman. In 1994, when depictions of gay and lesbian characters on TV were still pretty few and far between, a piece of information like this would typically be used to define Ross' character as someone who was so pathetic that he "couldn't please a woman" or been used as an excuse for why Ben's mother was out of the picture, but the Friends writers and producers had something different in mind. Instead, they fleshed out Carol as a full character, giving her a personality and a life beyond the generic label of "the lesbian who dumped Ross."

Throughout the series, we see Carol as a caring mother, a devoted partner, a competent teacher, a no-nonsense communicator, and a generous and loving friend — Phoebe mentions in an early episode how much she misses Carol at the group's hangouts, just to make it clear she was very much a part of life with Ross' friends and there was no ounce of ill will toward her for freely expressing who she is. Not only does Carol provide unwavering support to Ross — a man she's no longer married to and who, in turn, gives her away at her wedding (below) — but her relationship with Susan Bunch, played by Jessica Hecht, is one of the most consistent and nuanced of the entire show.

I'm honestly tearing up right now even writing this because I'm only now realizing what a gift we were given when this character stepped onto the screen. Carol is someone who was open about the fact that she was gay without explaining why that was OK — thus allowing Friends' audience to accept her for who she is without question. Carol Willick-Bunch wasn't a symbol, she wasn't a token, she just was, and everyone involved with creating such a quietly trailblazing character deserves a serious round of applause.