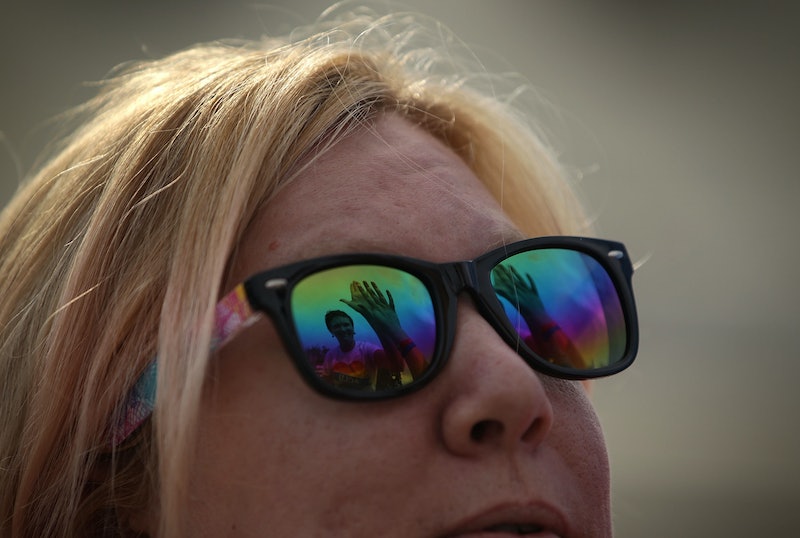 Friday was, of course, an emotional and celebratory day for America and its LGBTQ community, made clear through countless embraces and vows across the country. The Supreme Court finally made gay marriage legal in all 50 states, deciding that no state can prevent two people of the same sex from marrying. Whether supporters came to New York City specifically to celebrate NYC Pride, which kicks off Friday, or heard the news and just wanted to come together, advocates congregated in front of the Stonewall Inn in the West Village to share their stories, meet new people, and praise a day in history they will always remember.

The Stonewall Inn was the site of the 1969 Stonewall Riot, an event that many people mark as the beginning of the LGBTQ civil rights movement. In the 1960s, police raids of gay bars were a frequent occurrence. Frustrated with discrimination and harassment they faced from police officers and the city in general, patrons of the bar fought back in a "Rosa Parks" moment for the gay rights movement, according to the establishment's website. Beneath a sign that boasts "Come Celebrate 'Where Pride Began,'" some of the attendees were present for or remembered that June day 46 years ago.

Hundreds of activists, members of the LGBTQ community, and pedestrians of all ages made a point of stopping under the Stonewall Inn's rainbow-flag-decorated awning on Friday. Here are 33 supporters discussing their reactions to hearing that same-sex marriage can finally just be called marriage:

"It's historic because it's finally restoring rights that we should have always had, and it shouldn't be so historic. It shouldn't be such a big deal, but unfortunately, it is.

"When I found out, I was really overwhelmed, thinking about all of the people that have put their necks on the line and fought for this for so long. For me to reap the benefits of that when I didn't do any of the work is overwhelming and humbling and is more than I could ever ask for, so I'm really excited and looking forward to an awesome Pride Weekend now that we all have equal rights."

"We've been married three times to each other. The first was annulled and then we married again and then we married here. This is the first time that we actually have some assurance that it's going to stick, so we're elated. We're just so excited." —Tom Lockwood, 55

"I'm gay, and I'm 66 years old. I never, ever in my life thought I would see gay marriage in any state, never mind in all 50, so I think it's really spectacular. I think the gay community could be really proud of of the progress we've made in the last 10, 20 years."

"(The ruling) treats everyone equally. If you find someone that you love, you can get married and have all the same rights, and it's part of the progression of being treated equally and not being discriminated against."

"(The ruling is) very important to me because I actually remember the whole neighborhood when gay liberation first started when the Stonewall Riots began 40 years ago. It seems like we've come a very long way in a relatively short period of time. ... We came here to see Helen Mirren. It was only good fortune and hope and luck that we were actually also here for this purpose."

"We got married two years ago when Prop 8 was overturned in California, and we live in a state where same-sex marriage is not recognized, in Georgia, so it's very important to us that this got passed today. Our marriage is now legal in our home state of Georgia. ... We're here to celebrate our two-year anniversary." —Charles Wooton, 48

"I think that the announcement of the Supreme Court decision really justifies and validates gay relationships everywhere. The fact that we're meeting here, congregating at the Stonewall Inn is no surprise. It's the birthplace of the gay and lesbian civil rights movement. This representing one of the most important wins in that movement, it's totally apt and appropriate that we should be here today."

"People have the right to love who they love, and in human nature, people by-and-large do best when they're not alone. Many people fall in love and find a partner to get them through life's ups and downs. Everybody has the right to have that legally recognized."

"I'm from France; I'm just on vacation. I heard the news, and so I came here. So we have gay marriage in France since 2013, so I guess it's a revolution. ... It's equal rights for everyone. Everyone is able to get married as long as they are in love."

"We've been married for almost four years now in New York, and although we're very comfortable and accepted here in New York State and particularly in New York City, knowing that we're now protected throughout the country is an amazing feeling. Also, knowing that gay people and same-sex couples throughout this country can now get married in their own states is an incredible step forward for gay people everywhere." —Cynthia Stallard, 30

"I feel very excited. I wasn't expecting to feel this way because marriage is not the most important issue to me as a queer person. I would have rather had the Employment Nondiscrimination Act passed before marriage equality. I still see this as more momentum, but my hope is that the LGBT community and the U.S. will remember that the fight is not over and that there are LGBT people from Uganda to Russia who are still being persecuted. This is a good step forward for equality domestically, but we need to think about justice and liberation and love globally."

"I think (the ruling) will probably allow the gay community, the LGBT community to stop worrying so much about marriage equality and focus on trans equality and the homeless youth situation and all the other problems that are affecting the community."

"There was a good amount of the country that still wasn't able to get married and a challenge to the constitutional ban meant that today the Supreme Court ruled that the ban was lifted everywhere, so same-sex couples can get married. Finally."

"I don't know why I'm surprised, but I just didn't expect it this morning, and it kind of takes you by surprise. We just got married." —Zachary Violette, 31

"I think it's just about equality. It's about being treated the way everybody else is. It's so simple." —Sean Litchfield, 27

"I'm 71, and it's a long time coming. The other thing that's such a surprise is I didn't know it would happen in my lifetime, so that's a true gift, and it's closer to freedom for more people. We still have a lot of work to do, not just within the gay community but for everyone else that's looking for their freedom rights."

Schmiege and her partner were the first couple to marry legally in Albuquerque, New Mexico.

"It's really cool first of all for me to be at Stonewall because I'm not from New York. I'm from Maryland and am working here for the summer, so I came by to check it out, and it's really cool to be a part of this moment right now. There's so much history here."

"I live down the block and have gone by the Stonewall a million times. I've never walked in. I walked in today. I'm feeling really happy for all the people that are going to be affected by this decision."

"I felt like I should come down today because why not? I live close to Stonewall, but at the same time, I'm also very mindful of the other places in the world where they are not celebrating like we are today and also the people before us who never got to celebrate."

"It's like a mixed-emotions kind of thing because it's not like the Supreme Court should be hailed as a beacon of progressive politics. ... I guess I'm hesitant to be very, very grateful but just to be more like happy with what we have."

"I'm feeling complete and utter happiness and acceptance. I'm so excited; I couldn't contain it at work. I bursted out of my desk. I was like, 'Yes!'"

"I'm very proud of our country for righting a big wrong for the past several decades."

"It's really incredible that the entire country is united; so that's awesome that it's unanimous."

"I'm feeling overwhelmed with emotion. I never thought I would see this day. I'm 62, and I marched at the first march when I was 17 years old, 45 years ago, so I'm feeling really good. I've fought for civil rights for 45 years, and it wasn't for the right to marry; it was the right to be legal, to not be harassed, to not be arrested, and I've seen so much change in the past two years. It's astonishing."

"[When I found out about the decision] I was home alone in my bed, and I just literally jumped up and started screaming, started crying. ... I don't even know the words to say I'm so fucking happy that the government finally cares about us and that we're full Americans."

"I just think it's so great that it happened so quickly. We've been waiting so long, but in the past three years, everything has just bulldozed to bring us to this point. ... The rest of the country, no matter who they are, they can't say anything."

"I'm very, very excited. I'm married to my husband, and I have two kids, so I'm very happy for my children that they are going to have a better future. Things are really changing."

"Everything that's new is always a wonderful thing. It's good to receive passion in things that are happening. It's a beautiful day."

"[The decision] is extraordinary. It's about damned time. ... I think the country is ready for it, and we're all very excited."

"[I feel] relief and a sense of pride and a sense of success that we have equality and that it's recognized across the nation rather than a few states here and there. It's an honor being to be where it started at the Stonewall Inn, just happened to be here visiting with our family. ... It's just amazing that this event happened in our lifetime."