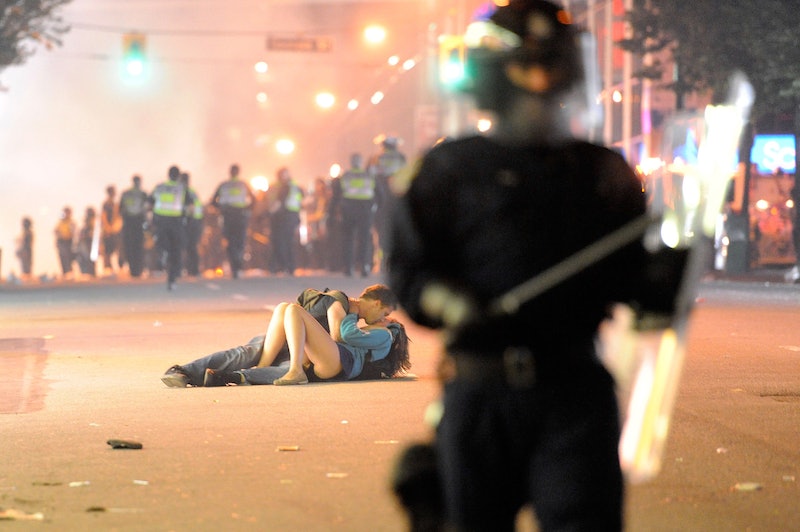 In June of 2011, riots broke out in Vancouver when the Vancouver Canucks lost the Stanley Cup finals to the Boston Bruins. People looted stores, threw stuff at police officers, and burned cars. The police, in turn, used pepper spray, tear gas, police dogs, and flash bombs on the rioters to dispel the crowd. The riots did $ 4 million in property damage and cost $13.5 million to investigate (yes, over hockey). But, wait, it’s not all bad! Remember that adorable couple photographed kissing during the riot? They’re still together!

The now-famous photo of Australian Scott Jones and Canadian Alex Thomas shows them kissing on the ground, surrounded by police and the hazy — some might say romantic — glow of street lights. At the time, Jones told the CBC what happened:

We weren’t being aggressive towards [police] or anything like that. But eventually they passed over us. And that’s when we were on the ground. She was a bit hysterical afterwards, obviously, and I was just trying to calm her down.

Four years later, The WorldPost tracked the couple down. They are still together and are now living in Australia. They told The WorldPost that the photo hasn’t had a huge affect on their lives, though they still do find it in unexpected places. They also have it in their home in Melbourne; Jones explains, “Rich Lam, who took the photo, he gave us both a copy of it that he signed, and we have one of those up in the bedroom.”

When the photo was taken in 2011, Jones and Thomas had only been dating for six months. Thomas told BuzzFeed Canada of that time,

It was a really fun time of getting to know each other. Plus, showing Scott all the things I love about the west coast: hiking, the mountains, the forests, Granville Island, taking the ferry, and yes, watching hockey.

Now, they’re enjoying living in Australia, and Thomas has applied for Australian citizenship.

Aww. Keep making out in the streets, you crazy kids!

More like this
How To See The Lunar Eclipse On May 15-16, 2022
By Kaitlyn Wylde
Here’s What Sarah Jessica Parker’s Canned Cosmo *Actually* Tastes Like
By Emma Garza
What Is “Night Luxe?” Breaking Down TikTok’s New Aesthetic
By Courtney Young
TikTok Is Using A ‘Love Island’ Sound To Expose Their Weird Crushes
By Courtney Young
Get Even More From Bustle — Sign Up For The Newsletter