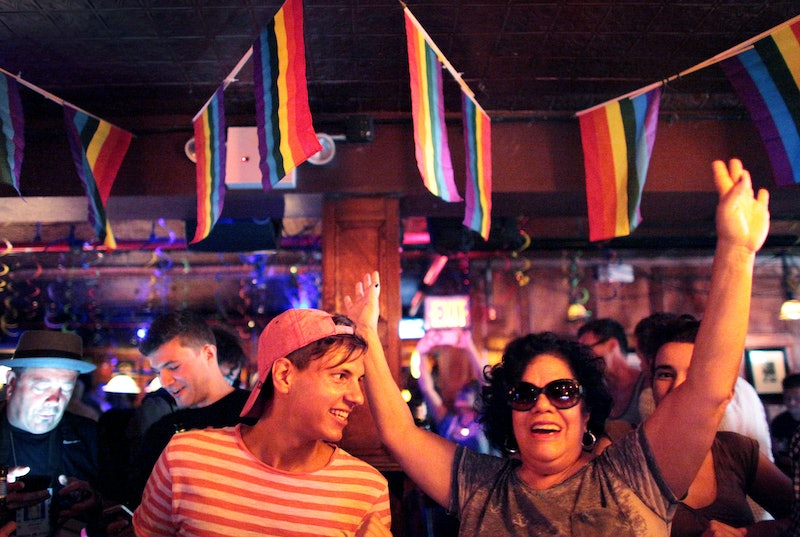 There are a few really good reasons why June is LGBTQ Pride Month. After all, Friday doesn't mark the first time that a momentous LGBTQ rights event has occurred at this time of year. The end of June has long been a time for action, rulings, and celebrations during the fight for LGBTQ rights. In fact, there have been at least six major events that have happened during the last few days in June over the decades that have advanced the gay rights agenda. Starting with the Stonewall riots, which will have its 46th anniversary on Sunday, the last week in June has proven to be an historic time.

June was selected as the pride month for the LGBTQ community because of the Stonewall riots and the major impact it had on the movement going forward. By happenstance, many major rulings have coincided closely with the end of Pride month. To add to the celebrations being held for Friday's Supreme Court decision that legalized same-sex marriage in all U.S. states, and also to commemorate the many victories that led up to this day, let's take a look back at all the times late June proved to be a happy time for LGBTQ rights:

The Stonewall riots are largely considered to be the start of the modern American LGBT rights movement. The riot began on June 28, 1969, when laws prohibiting homosexuality were still on the books in New York. Gay men at one of the city's only gay bars, the Stonewall Inn, were harassed by police and then began to resist. Soon they were joined by a large crowd of LGBT people and allies who rioted that night and again on the 29th.

The first gay pride march held in New York was on June 28, 1970. The march was held to commemorate the one-year anniversary of the riots at Stonewall.

An historic ruling for the gay community, the Supreme Court ruled on June 26, 2003 that sodomy was no longer illegal across the U.S. Anti-sodomy laws had been used to prosecute gay men, and this ruling was considered to be the decriminalization of homosexuality.

One June 24, 2011, New York state passed a law that legalized same-sex marriages for each county in the state. At this time, New York was the largest state to pass a marriage equality law.

The rejection of a key portion of the DOMA (the Defense of Marriage Act) on June 26, 2013 was one of the largest gains for LGBTQ rights. The Court did not rule in favor of the right for same-sex couples to marry in any state, but the striking down of DOMA meant that married same-sex couples were now entitled to the same benefits as straight married couples.

Now we arrive at last to the present day. On Friday, June 26, 2015, the Supreme Court finally ruled that it is legal for same-sex couples to marry across the entire U.S.

This time of the year is a wonderful opportunity to honor and respect the activists and leaders who risked so much in order to better the status of the LGBTQ community in the U.S. It is also certainly a time to acknowledge and celebrate the victories that continue to mount. Happy Pride!