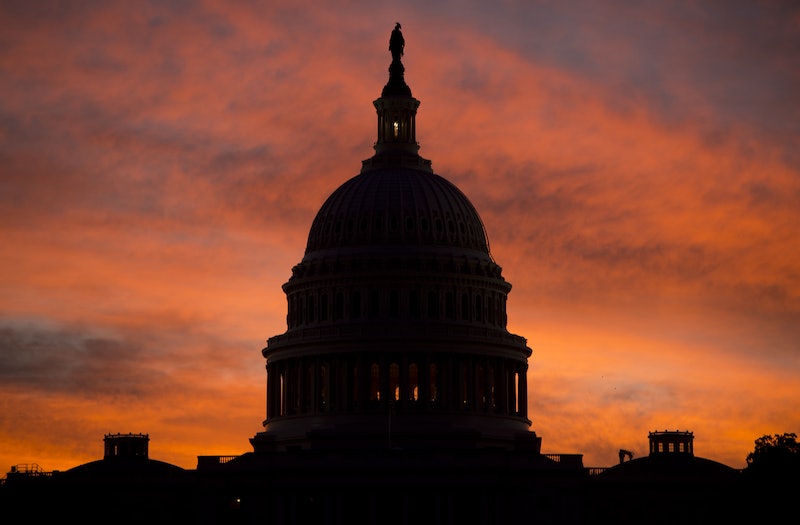 This past week has undoubtedly been one of the most eventful for the United States of America in recent memory, good and bad alike. You've got the euphoria (at least on the political left) of same-sex marriage being legalized and Obamacare being saved by the Supreme Court, in just two days. And you've got the wrenching anger and heartbreak of last week's deadly mass shooting at Emanuel AME Church in Charleston, South Carolina, and everything that's carried with it. Given all the monumental events, here are nine things you'll never see or hear again after this week — if the past has any bearing on the future, at least.

It's unusual to feel torn in so many directions all at once. The enormous, positive social change coming on the back of the Supreme Court's same-sex marriage ruling will surely impact America's relationship to same-sex unions — and indeed, same-sex love — for the foreseeable future. But we're also now in a climate where the pernicious, potentially deadly effects of racism have been laid bare for all to see, thanks to alleged Charleston shooter Dylann Roof, and the apparently bigoted ideals that motivated him. When it's all said and done, this week could remembered as a pivotal moment in American history.

Because if you thought letting gay people get married is "redefining" the institution, well, that's already happened! It's in the books now. The ship has sailed. Marriage in America now includes the right of same-sex couples to be wed, and to advocate otherwise is demand your own, regressive redefinition of marriage.

"Marriage has meant the same thing for thousands of years," they said. Sure, it was a flimsy, ahistorical argument in the first place, but as of Friday morning, it's even more unworkable.

The latest, not-so-greatest challenge to Obamacare (more accurately known as the Affordable Care Act, but your mileage may vary) came up short at the Supreme Court on Thursday, as six justices (Roberts, Kennedy, Sotomayor, Kagan, Ginsburg, and Breyer) ruled to uphold the law's federal insurance exchange system.

Which means we'll all be spared the breathless, concerned talk about the law's death in the courts — until the next inevitable conservative broadside, of course.

3. You Won't See The Confederate Flag Flying Over The Alabama Capitol

After South Carolina Governor Nikki Haley's announced earlier this week that she wants to remove the Confederate battle flag from the state capitol — a process that requires approval from the state legislature — the governor of Alabama did her one better.

On Wednesday morning, without warning or fanfare, Gov. Robert Bentley ordered the flags removed from the capitol.

4. You Won't See As Much Confederate Flag Merchandise

Whatever you think of the Confederate battle flag — I'd go with "disgraceful emblem of an explicitly racist military rebellion" — you can expect to see fewer of them going forward. Retailers are already balking in the aftermath of the Charleston shooting, with Walmart, eBay, and Amazon pulling Confederate flags from their shelves, and Apple yanking games containing the flag from its App Store.

Because, really, how much more obvious does it get?

6. ... But You Won't Hear The Conversations On Race That Need To Happen

Though the Charleston tragedy has stricken many Americans with grief, there remains a risk that big picture issues will be drowned out. Think about the institutional racism that harms millions of black Americans every day — systems and standards white people benefit from, deliberately or not, which is basically what "white privilege" means — and that's a harder, more personal conversation. And it can't be had unless white America becomes wiling to do so.

Because he already proved his case once. While discussing racism in America with comedian Marc Maron in a podcast released this week, Obama spoke the reviled word aloud, making a pretty crucial point.

And yet, countless people failed to listen to his thoughts, and just zeroed in on that single word — which was exactly the problem he was getting at.

Obama's eulogy for State Senator and Reverend Clementa Pinckney begins at about the 1:22:00 mark, and it's worth your watching in full. Pinckney was one of the nine people slain in the Charleston shooting, all of whom Obama remembered by name.

9. ... And You'll Never Hear An "Amazing Grace" This Amazing

At one point during the eulogy, Obama repeated the words "amazing grace," repeating them as if rolling them around in his head, before beginning to sing. He's launched into spontaneous song before, but never in such on such an emotional, sad occasion, and it's a pretty incredible moment.