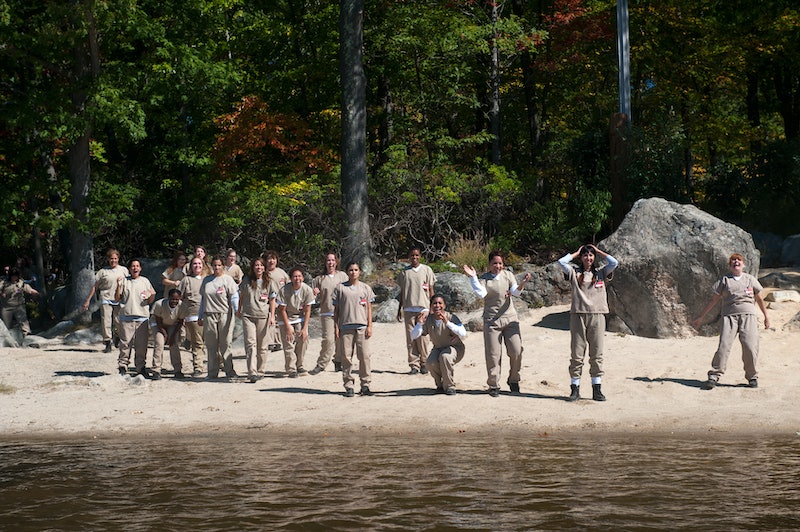 Another season of Orange is the New Black has come and gone, and I'm loving picking apart my favorite details and character moments. It reminds me of another show I used to obsess over, years ago. Have you ever thought about how Orange is the New Black is a lot like Lost ? You know, without the time travel, epic destinies, and sideways world.

I'm not suggesting a crossover. While almost all of the characters on Lost were criminals at some point in their life, only Kate would fit into that world as a fugitive. The 1970s Dharma jumpsuits are nothing like state-issued uniforms. The characters aren't that similar either. Would you say Red is more Locke or Benjamin Linus? However, they are both shows about people thrown into a situation they'd rather not be in. Both snuck up on us as ensemble pieces and have religious themes that explore multiple definitions of faith. They are both about starting over and appeal to our sense of disconnection in the digital world in very different ways. In fact, if I were to get real sappy on you for a second, let me quote Christian Shepherd from the Lost finale that could easily apply to Orange is the New Black as well:

"This is the place that you all made together so that you could find one another. The most important part of your life was the time that you spent with these people. That's why all of you are here. Nobody does it alone, Jack. You needed all of them and they needed you."

It's that a lovely companion to "Remember all their faces. Remember all their voices. Everything is different the second time around." from the bridge of the Orange is the New Black theme song? Here are eight other structural, and silly, similarities between the two series. Namaste.

That's the biggest similarity, of course. The shows use similar storytelling structures. More specifically, both Lost and Orange is the New Black use their flashbacks to focus on one (sometimes multiple) characters to explain both how they got to where they are now and to support the theme of the episode or season.

Of course, Lost eventually had both flash-forwards and flash-sideways as well. Presuming you aren't one of the fans who presents Lost Season 6 doesn't exist, wouldn't you love to see what the Sideways World looks like for OITNB?

2. The World Is Bigger Than We Thought

Seriously — since when was the maximum security prison so nearby and why didn't it figure into Vee's escape plan?

3. They Have Diverse Casts

Being stranded on an island and being in prison force you to connect with people outside of your race, ethnicity, social class, or circle. It's not surprising that both shows took advantage of that — it's good television.

4. The Books Pile Up

RIP the Litchfield library, because the books Orange is the New Black characters reference and pick up are a subject of fan discussion. This reminds me of a time when I read Stephen King's Carrie because it was Juliet Burke's favorite book, and politely decided against checking out The Turn of the Screw from Desmond's collection.

One is a Dharma Initiative station and the other is more like a tunnel in a garden shed that leads to the outside world — but a hatch nonetheless! In fact, Season 3 of Orange is the New Black revealed even more secrets hidden around Litchfield, just like the Island.

6. There Are Power Struggles

On the Island you were either Team Locke, Team Jack, and occasionally Team Sayid, Ben, or Sawyer. At Litchfield, the cliques are set, but conflicts occur within them and different "matriarchs" vie for control of different areas or jobs.

7. The Freedom Levels Are Low

Sure, in the prison world of Orange is the New Black, the inmates have had their rights taken away from them by law. However, the castaways are also prohibited from leaving the island by varying factions of fate and/or The Others. Food is rationed/difficult to come by.

8. They Have Larger Mysteries

Lost may have explained the polar bear, but Orange is the New Black has yet to explain the chicken!

This. Sex scenes in cages/prison cells for everyone!