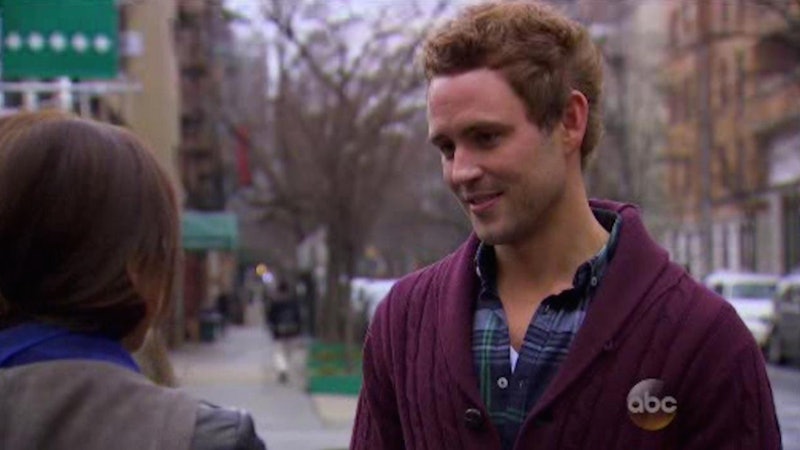 After the long-awaited episode — or sexpisode as I've dubbed it — occurred on The Bachelorette , and Kaitlyn and Nick had sex (off-camera, of course), backlash occurred for both reality stars. Kaitlyn and Nick, two consenting adults, both took to Twitter to speak up on the backlash that they received. Kaitlyn approached the topic with a little more restraint than Nick, but both had positive things to add to the conversation of sex on a reality show like The Bachelorette. Through his tweeting rampage, the question of if Nick Viall is a feminist came up, since his words seemed to err on the side of promoting gender equality. Of course, there's always the chance that he is just defending the situation in favor of what the majority of people want him to say.

But, at the risk of giving Nick too much credit, I think Nick is proving to have some feminist qualities. Nick has supported Kaitlyn, not for her "intimate" time with him, but because she came out on national TV and said she did have sex, and that she's not ashamed. And, even though I think Nick can be misunderstood at times, I don't think it's difficult to distinguish what Nick really thinks about sex in these tweets.

And, I agree with Nick. Men and women have the equal right to have sex without judgement. Whether you like Nick or not, that's a statement that feminists should say hoorah to. But then... there's the incident with Andi Dorfman after the finale of The Bachelorette. Nick's comments, while not anti-feminist (refresher: he asked Andi, on live TV, why she had sex with him if she didn't love him) danced more around the issue of just being a blabber mouth. Nick's problem here isn't whether his actions contradict a feminist ideal he seems to support on social media, but why he is so blabby about his intimate moments with partners.

In my view, Nick bringing up having sex with Andi wasn't slut-shaming as much as it was just inappropriate to bring up on TV. It opened the door for others to slut-shame her, which unfortunately, occurred.

The same thing is the case with Kaitlyn. Instead of keeping his lips zipped after his overnight date with Kaitlyn, he tells the remaining men that him and Kaitlyn shared an "intimate" moment together in her hotel room. Sure, intimacy includes a lot more than just sex, but come on Nick... like you weren't stirring the pot. (Although he claims he wasn't.)

It seems Nick has never come out to say if he considers himself a feminist or not, but I think if he is true to his word, it would suggest that. I invite Nick to make that statement, assuming he understands the depths of the word, and share why he is a feminist. At the same time, he needs to learn to respect a partner's privacy — even though they're on a reality show — and have a discussion about outing a physical relationship on mutual terms, versus when he feels like it's the thing to do. Does Nick have some problematic moments? Yes, we all do. But, I think that if his support of Kaitlyn is any indication, he's not the villain so many have made him out to be.

More like this
JoJo Fletcher & Jordan Rodgers Got Married In A “Playful & Fun” Wedding
By Grace Wehniainen
Everything To Know About 'RHONJ' Season 13
By Brad Witter
When Was 'Bling Empire' Season 2 Filmed?
By Alyssa Lapid
Kourtney & Travis Crashed His Daughter’s TikTok Live In Their 2nd Wedding Outfits
By Grace Wehniainen
Get Even More From Bustle — Sign Up For The Newsletter