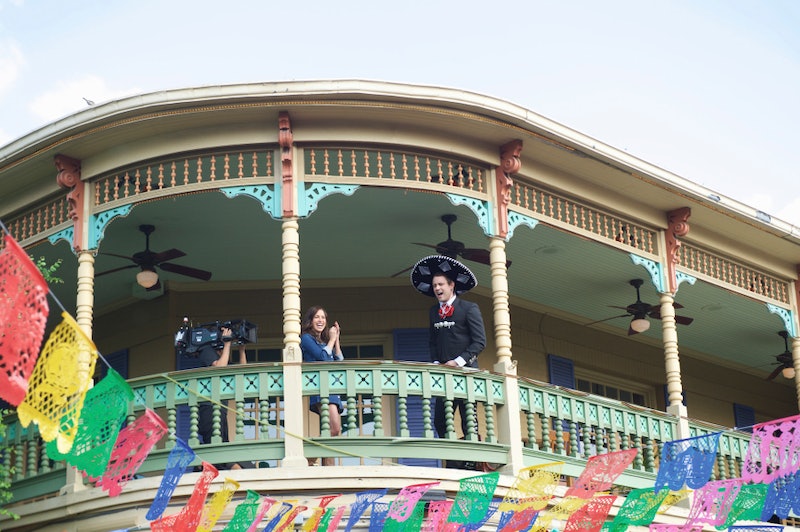 For some, Nick's presence on the show seem off. Like, you can't put your finger on it, but it seems like he is just there to f**k with the other guys, or get some fame for being... a front-runner? When Nick broke the "rules" on Andi's season and stole her away on a non-date date, it did feel unfair. It seemed like he was happy to be the guy that the other men hated. That's totally a villain's trait, right? Or is it him just standing out from all the other scarf-wearing gents? Maybe the other guys on the show were so quick to attack Nick because they were pissed that they didn't think to do it first. Had they known it would be "allowed" by producers (because let's be honest, Nick didn't really "sneak away" anywhere... He had a crew of cameras with him), Josh Murray would have done the same thing. Chris Soules would have done — well, actually, Chris probably would have just been sitting there on the couch.

So what has Nick done that was villainous? Did he ever give another suitor a poison apple, or steal their voice so they couldn't speak to the Bachelorette? Sorry, I got off on a Disney tangent. But really, has Nick ever said anything to anyone that was deemed offensive?

The incident that happened between Nick and Andi at the "After the Final Rose" was in poor taste. I think everyone can agree that there was definitely a better time and place to ask "Why did you make love to me?" With that said, I think it was an important conversation to be had, just maybe behind-the-scenes. But, it wasn't necessarily something that would constitute him as a villain. It was more like a heartbroken guy who doesn't know what "all of America is watching" means when Chris Harrison introduces the episode.

This season, Nick shows up during Week 4 and wants to be allowed to join the remaining guys. Annoying? Yes, because I'm rooting for Ben H. this year. Villainous? No, it's not. Especially if his intentions are true, then it's actually admirable and brave because of course the show was going to play it like the big bad wolf was coming to eat up all the poor little guys that just want to fall in love. As far as I've seen, Nick has been polite to the other men since joining this season. He has listened to their trepidations with a lot more patience than I would have had — "Can I live?" would have been the first thing out of my mouth — and for that, I don't think he should be labeled the villain.

Let's talk about real villains that The Bachelorette has seen, and compare them to Nick. Possibly the biggest "villain" in Bachelorette history is Bentley from Ashley Hebert's season. Bentley abruptly left Ashley heartbroken with not much to say, until he wanted to say a little more, and came back... JUST TO TURN HER DOWN. He was vocal about his disinterest in her from the start, and it was very inauthentic for him to even be there.

Or remember Wes, from Jillian's season? First of all, shame on the producers for even putting a guy with a girlfriend on the show. Wes was on The Bachelorette for one reason and one reason only... to promote his music that no one is listening to years later. As "The first guy on The Bachelorette to ever make it to the Top 4 with a girlfriend," Wes deserves to be called a villain.

I wouldn't lump Nick in with the likes of these true Bachelorette villains. Maybe he's more aggressive than the other guys, maybe he's a little sneakier, but at the end of the day, The Bachelorette is not a real life situation... who says you need to follow "the rules"?