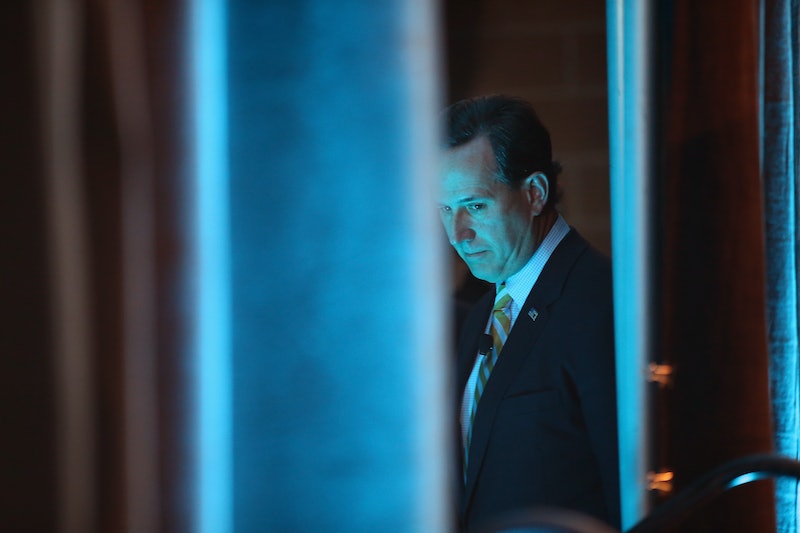 It's been a busy month. With major SCOTUS decisions on health care, public housing, and gay marriage all rolling in under the wire in the span of one week, the past few days alone would have been enough to send anyone reeling. Of course, the big topics of the week weren't the only ones in question: just weeks ago, the media feeding frenzy was also focused on former NAACP Spokane president Rachel Dolezal, the expiration and re-issuance of the Patriot Act (albeit under a shiny new title), and, only last week, the tragic shooting in Charleston. And with all the news that seems to be breaking left and right, it's probably time that many of the 2016 presidential candidates reconsider their statements on those topics if they want to garner votes.

"[This is] a huge opportunity for Republicans if they handle it right," explained former New Hampshire Republican Party chair Fergus Cullen, in an interview with The Boston Herald on Friday, following Thursday's SCOTUS ruling in favor of the Affordable Care Act. "They have to [start coming up] with alternatives."

Republicans aren't the only ones that need to be on their toes. With an outpouring of vigorous (sometimes disappointed) rhetoric stemming from the right, and a resurgence in energy and momentum pushing the left faster than it can type up tweets, it's time that each candidate evaluate their statements on the current issues at hand and rework them accordingly.

Here's how some of the 2016 front-runners and presidential hopefuls should re-brand their stances in order to keep their supporters happy (and, hopefully, donating to their piggy banks):

What he said: The former Pennsylvania senator wasn't afraid to chime in on the gay marriage ruling, tweeting on Friday, "5 judges cannot change 5,000 years of history. Join me and fight for marriage."

What he should say next: Santorum so far has been pretty on-the-ball, mentioning directly after his first few reaction tweets that it was time to rally support for "religious" liberty. That's a strong selling point on the right at the moment, and Santorum would do well to exploit that fact among his largely right-wing supporter base. Instead of angry bashing, the erstwhile politico turned talking head needs to continue with the religious freedom argument. Given that the fight to establish religious protection laws in states like Indiana has become so heated a debate, it will no doubt be a hot-ticket item over the next 18 months.

What he said: "The phone records of law-abiding Americans are none of the government’s business," Kentucky Sen. Rand Paul boldly declared on his campaign website recently.

What he should say next: Paul's eccentricities may not have been enough to stall the progress of the USA Freedom Act — essentially a downsized version of the beleaguered right's pet Patriot Act — but he was able to fight the majority to push the Patriot Act itself over a cliff to its doom. And while that doesn't sit well with The Powers That Be (namely Mitch McConnell), it seems to have garnered Paul a good deal of favor with the anti-establishment Republicans who long for smaller government presence, and even a few moderates looking for a fiscal conservative with the guts to go after Washington's shadier partners. Without that sort of explosive campaigning, Paul is simply another face in the crowd.

Ben Carson On The Charleston Shooting

What he said: "Not everything is about race in this country," wrote the former neurosurgeon in an op-ed for USA Today, following the tragic mass shooting of nine prayer meeting attendees at a historically black church on June 17. "But when it is about race, then it just is."

What he should say next: With one tweet, Carson set himself far apart from his fellow GOP contenders — in the best way possible. In order to serve his own best interests, Carson needs to continue pursuing paths that his rivals are too scared to explore. The topic of racism is a tough one to discuss in any circle, but especially so on the the right. That doesn't necessarily mean that he needs to move to the left or become the leader of the contemporary civil rights movement, but with his many weak spots on things like Foreign Policy, his role as a peacekeeper and a supporter of the "little guy" will win him more of the minority vote than anything else.

What he said: "I am disappointed in the Burwell decision, but this is not the end of the fight against ObamaCare," tweeted Bush on Thursday, following the SCOTUS ruling that upheld President Obama's 5-year-old health care measure.

What he should say next: With a bevy of missteps and a slew of ugly history pushing back against his every move, Bush needs to separate himself from his family legacy. His views on education (the former Florida governor supports Common Core) have landed him in hot water with Republicans before and his foreign policy stances a shaky selling-point, his best option is to go with a topic that brother George never had a chance to weigh in on in an official capacity. For Bush, health care should be his baby.

What she said: In a moving message on her Twitter Friday, Clinton wrote, "Proud to celebrate a historic victory for marriage equality—& the courage & determination of LGBT Americans who made it possible."

What she should say next: Clinton's detractors were quick to point out that the former Secretary of State hadn't always been supportive of marriage equality, citing her own words in October 2000.

"I don't support gay marriages," said Clinton at a donor event in Vermont that month. "But I do support extending benefits to couples, domestic partner benefits."

Clinton must continue pushing forward with full-throttle support for the LGBTQ community, given her flip-flop. It's decidedly the only move left in her arsenal at this point. The former FLOTUS may currently hold the majority in national polls, but her main opponent, Vermont Sen. Bernie Sanders, is already gaining on her — and with his progressive views on LGBTQ rights, he could easily overtake her if she isn't careful.