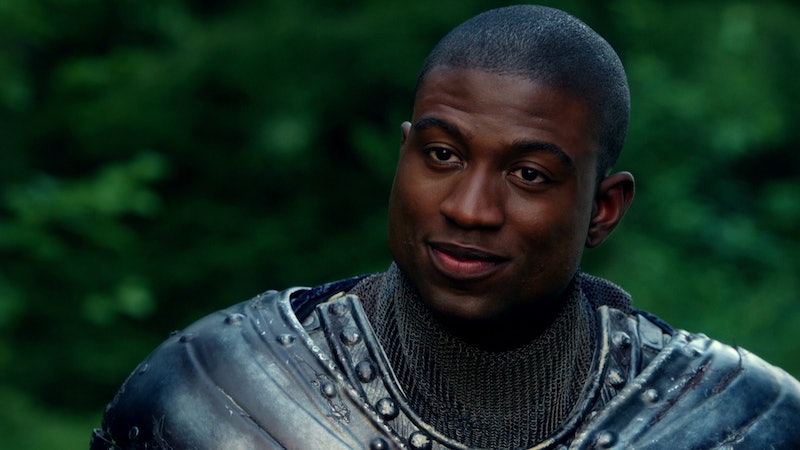 The summer is dragging on interminably, and we're still three months away from the premiere of Once Upon A Time Season 5. It's too far away and I'm impatient, so I've been keeping an eye out for any tiny morsels of information of what we can expect come September. Those morsels have been few and far between, thus far, but here's something I think we can all be happy about: Lancelot is coming back for Season 5! That's right — Sinqua Walls will reprise his role as the infamous knight of the Round Table, and this is great news, not to mention a major hint about Season 5 at large.

Entertainment Weekly quoted Once executive producer Edward Kitsis as saying, "Oh man, you can’t go to Camelot and not see Lancelot." And it's true, you can't — but this means that what I've been thinking for a while now (especially given the fact that we already knew King Arthur and Guinevere were coming on board) is likely true: we're going to Camelot next season. It's not really surprising news, especially since we'll need to venture out of Storybrooke to find Merlin, but it does raise some pretty important questions, mainly this: Isn't Lancelot supposed to be dead?

The last time we saw Lancelot, it was back in Season 2 in the Enchanted Forest, when Snow White and Emma fell through a portal and ended up there. He told the women that he'd become a disgraced knight because of some woman (Guinevere?), so I'm sure that storyline will be revisited during Season 5. But more to the point, Regina's mother, Cora, later appeared and claimed that she'd killed Lancelot and had been using his likeness to try and find a way out of the Enchanted Forest for good. Of course, we never actually saw Lancelot's body, so this could easily have been a lie. And given that Cora's dead (and she was generally not very forthcoming with the truth unless it suited her), there's no way to verify that without trying to find him, dead or alive.

Of course, Lancelot doesn't need to be alive in the present in order to appear on the show. Flashbacks have been used pretty regularly throughout Once's first four seasons, so there's no reason to believe it won't happen again in Season 5, especially since we already know we'll be using flashbacks to introduce Rumpelstiltskin's mother, Evanna, at some point. (Could the two be tied? Who can say — but I don't want to go down that path!) It's perfectly reasonable to assume we'll only see Lancelot insofar as his past affects the current storyline. Which could even mean we might see what Cora did to him, though hoping for another Barbara Hershey appearance is probably too much to hope for, and besides the point.

After all, we can't spend too much time in Camelot's past — we'll need to stay in the present in order to find Merlin and get him to try and destroy his worst creation ever: the Dark One. It's precisely that fact, not to mention the reality that this hunt for Merlin will likely be a major focus of at least the first part of Season 5, that makes me nearly certain that Lancelot is still alive somewhere out there, even if it's not within Camelot at this point. He could have gone into hiding after becoming disgraced, or — given Cora's propensity for torture — imprisoned somewhere and awaiting rescue. Now that's a storyline.

It's unclear at this point how many episodes Walls will return for and in what capacity. It's perfectly reasonable to assume that we'll only see him once or twice in passing, but given that Camelot is going to be so integral in shaping Season 5, I'm hoping he'll be around a bit more than that. I guess time will tell!

More like this
Everything To Know About The Possibility Of 'The Essex Serpent' Season 2
By Rachel Mantock
Grey's Anatomy Fans Are Worried They Figured Out The Sad Reason Japril Returns
By Brad Witter
'Who Killed Sara?' Won’t Return For Season 4
By Brad Witter
ITV’s 'Grace' Will Likely Return for A Third Season — & Many More After That
By El Hunt
Get Even More From Bustle — Sign Up For The Newsletter