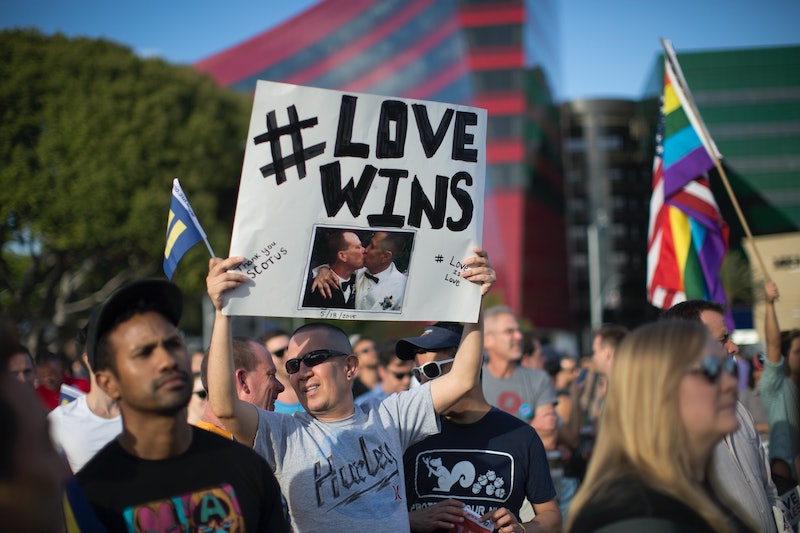 Now that the Supreme Court has officially declared same-sex marriage bans to be unconstitutional, effectively making marriage equality the law of the land, the effects are going to be felt throughout the country — including possibly the economy. According to a report from the Williams Institute, same sex marriage is good for the economy, what with all the additional dollars spent on weddings and everything that goes along with them. So which states will be getting the biggest boosts to their economies? And how big a bump are we talking about?

Well, when you think about it, weddings cause a lot of cash to change hands. First, obviously, there's the expense of the wedding itself, which can be huge. But then there's also the money spent by guests bringing gifts or buying new outfits, and especially by out of town guests who spend money on travel, hotels, and in-town expenses. Plus the wedding is usually followed by a honeymoon.

In New York, for instance, $228.6 million has been pumped back into the economy since they legalized same-sex marriage in 2011. And California is on track to see even greater gains. Obviously less populated states will see less revenue, but there are still potential economic gains for everyone according to the Williams Institute report, which was released last year. In fact, they predicted that nationwide marriage equality would net $2.6 billion in spending, including $184.7 million in tax revenue, and help create 13,058 jobs in the first three years overall.

So while it seems unfair that states that have fought against marriage equality so hard should see economic benefits, I suppose it might help convince people that this is a good thing and not, in fact, the apocalypse. So which of the 13 states that still had same-sex marriage bans before June 26th will see the most benefit? Well here are the top 5, based on the projections:

Over the next few years, Tennessee can apparently expect to see an extra $36.7 million spent in the state. Not too shabby.

Now that same sex marriage is legal everywhere, Michigan is not longer getting in its own way when it come to an extra $53.2 million pumped into the state economy.

In Ohio, the next three years should see an extra $70.8 million spent in the state as a result of marriage equality. That's certainly not spare change!

In Georgia, marriage equality will inject an extra $78.8 million into the state economy over the next three years.

They say that everything's bigger in Texas, and in this case that's definitely true of the amount of money the state can expect to see. According to the Williams Institute, the Lone Star State economy will now be getting a $181.6 million boost from same-sex marriages.

You can find more info about marriage equality and its economic impact here.