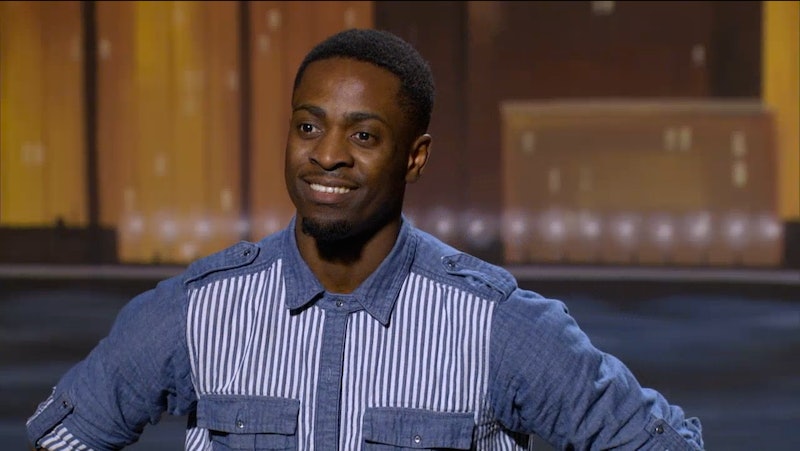 With the Las Vegas callbacks starting on Season 12 of So You Think You Can Dance on Monday, June 29, it's time to see if the dancers that wowed the judges during auditions can prove themselves worthy to make it to the live shows. One Team Street dancer that I want to see stick around on So You Think You Can Dance is Alain "Hurrikane" Lauture. Hurrikane danced during the fourth round of auditions in New York City on the June 22 episode. Since New York is the birthplace of hip-hop, he had a fair amount of competition, but the Haitian-born Hurrikane made an impression on the judges with his dance style of locking and his charisma. Judges Jason Derulo, Paula Abdul, and Nigel Lythgoe all voted for him to go to the Las Vegas callbacks.

Before ending up on the So You Think You Can Dance, Hurrikane faced a difficult time with his family life. He was born in Port-au-Prince, Haiti and lived with his mother during a time of conflict for the nation. His father was living in America and since Hurrikane's mother was struggling with raising her five children in Haiti, she asked his father to bring them to America. He was very close to his mom so the parting was difficult, but he said his mother was happy because she knew he'd have a better life in the U.S.

He cried when telling his story to the cameras and said he hopes to be an inspiration for other children in Haiti to show them they can dream of doing what they love. But, you would never have known from his audition about his emotional past. From his infectious smile to having Derulo excitedly exclaim a Haitian greeting to him, he won over the judges with his dance to "Thinkin' About Your Body" by Bobby McFerrin.

Judge and producer Lythgoe said, "I love seeing people enjoying themselves" after Hurrikane danced. By enjoying himself onstage, he made the audience and judges enjoy themselves too. He finished his dance on the stairs after jumping over the camera and off the stage — locking and smiling the entire way.

So You Think You Can Dance wasn't the first time that Hurrikane has showed off his skills. He also has an active YouTube channel, as well as a Twitter and Instagram. "I want to book a job not because someone knows me, but from my skill and hard work," he wrote on his casting profile for a talent agency. Since he wants to prove his dance skills, So You Think You Dance is the perfect place for him.

As part of tWitch's Team Step, he'll have to prove that his locking can earn him a spot on the live shows. But, even if he doesn't make it, I suspect Hurrikane will continue to bring joy to others with his dancing for a long time to come.