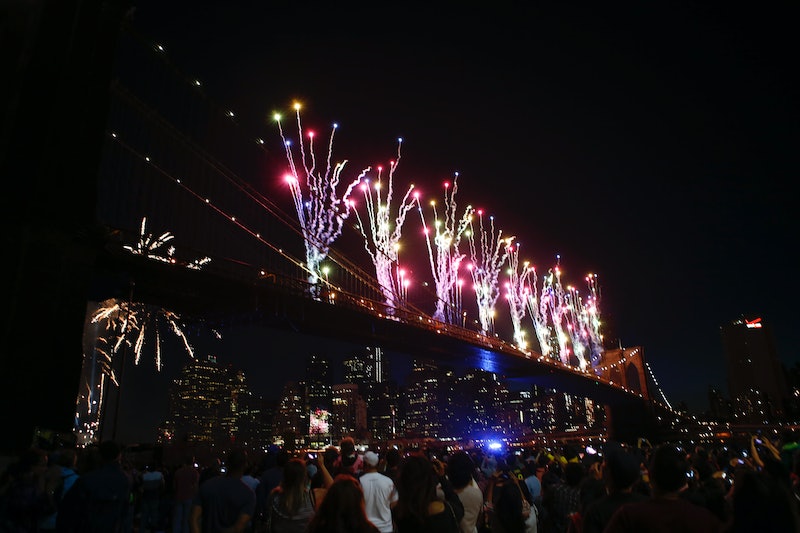 For those of you not near New York City, or for those of you who just hate the outdoors, you can still catch the annual fireworks via the good old TV set. So, what channel are the Macy's Forth of July fireworks on? For those of you in the Big Apple, Macy's has provided a list of access points for public viewing of the fireworks on Saturday, July 4, but if you're not in the area, you can also see the epic fireworks display on NBC at 8 p.m. EST. If where you live doesn't have fireworks — or you just require fireworks on a grand scale to celebrate the holiday — then you should be watching NBC on Saturday.

It's the 39th anniversary of the Macy's 4th of July Fireworks Spectacular and NBC's Today show hosts Willie Geist and Tamron Hall will be doing the emcee work for this national event. Along with the fireworks, there will be performances by singers Gloria Estefan, Dierks Bentley, Kelly Clarkson, Brad Paisley, Flo Rida, Meghan Trainor, and the British Ed Sheeran. Hey, I'm all about the Brits, but maybe us Americans shouldn't celebrate our independence from England with the most British singer there is right now. No offense, Sheeran — I'm just sayin' there seems to be a disconnect between this specific holiday and British people. But, go U.S.A. for being accepting of a red-haired redcoat.

While the fireworks are bound to be more breathtaking in person when viewed from Manhattan, Queens, or Brooklyn (as long as you have an unobstructed view of the night sky over the East River), watching from the safety of your own home means no crowds, no earplugs, and no stress. (I'm now officially the oldest person for writing that.) But, no matter where you watch, the NBC site brags that the fireworks will last for 25 minutes and include more than 50,000 pyrotechnic shells. And, with the new shells and effects for 2015 including "multi-colored transformation ghosts, blue and red octopi, crescent moons, patriotic stars, double hearts, roaring dragons, screaming banshees, purple rain, and spider-webbed shaped shells," it sounds like it's going to be an expensive interpretation of a box of Lucky Charms — and something not to miss.

The theme of the 2015 fireworks display is "Brave" and Macy's is trying to get more people involved with the event by having people share their "#AMERICANSelfie"s on Twitter and Instagram. So even if you are just watching the fireworks show from the comfort of your own home on NBC, you can still feel personally involved in the most popular fireworks show in America on the most American day there is.