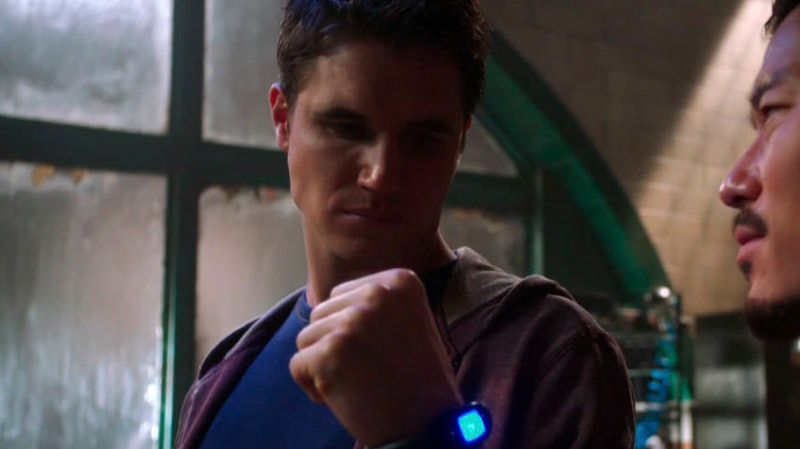 This week's episode of The Tomorrow People is called "Limbo," but it could just as well have been called "Confessions" or "Cara Can't Keep a Secret." I actually thought things were looking up for TTP last week when Stephen and Cara hooked up and actually displayed a little chemistry, but that tryst seems to be over now that Cara's come to her senses and, once again, Stephen bores me. Below are the confessions (along with some quasi-confessions) of the episode, along with their predictability rating.

Cara to Stephen: Hooking up was a mistake.

Predictability Level: Duh, because it's not a triangle if it's ever easy.

After their (presumably wild, hot and steamy) hookup, Cara leaves Stephen half naked and mega confused in the hotel room they "borrowed" with the help of their telepathy and teleportation. Cara doesn't just leave — she leaves looking super uncomfortable and full of regret. This is right after they do it. This should have been enough of a confession, but Stephen actually makes Cara say it later in the episode. Then he gets all weird and controlling and gives her a speech about how he KNOWS what she wants and he'll only leave her alone if she lets him read her mind so he can be sure she's telling the truth when she says she doesn't want to be with him. It's sweet in exactly the same way that Edward Cullen watching Bella Swan sleep at night without her knowledge or consent was sweet (but it's totally not).

To make matters worse, the Tomorrow Person of the Week is a villainous serial rapist, using his powers for evil, which makes Stephen's promise of sexual harassment (because let's not kid ourselves, that's absolutely what it is – Cara said it was a mistake and she's not into it and he openly refuses to accept that answer) all the creepier. I don't think the show was trying to draw parallels or use this as a teachable moment. I think we're really supposed to be rooting for Stephen (or at least some of us. As a founding member of Team John, I can do no such thing).

Cara to John: I slept with Stephen while you were away.

Predictability Level: Hmm… I thought they'd drag that out a little more.

This one was actually a little surprising, not because we didn't already know that's what happened in the hotel room, but because it was a very quick confession on Cara's part. I, for one, expected a little more tormented secret-keeping. She lasts two days before she spills her guts. Luckily, she had a Get Out of Jail Free card because John feels terrible about keeping his secret about his ability to kill from her. Even so, the most shocking part of this whole confession is how easily John chooses to forgive her and move on. He does ask if she loves him and we even get a little kiss action when she says that she does. The best thing about John's whole handling of the sitch though: When Cara asks what happens next after her big confession, he responds that it's up to her, which is pretty much the polar opposite of Stephen's stalkery promises of emotional rape.

Astrid to Stephen: I love you.

Even though Stephen promised to never use his powers on Astrid, he still reads her mind, confirming what we all knew: She's in love with him.

A little backstory: Stephen shows Astrid his powers, bringing her on board as a keeper of his secret because they are BFFs. Later, in gym class, Stephen is one of the captains in a game of basketball and picks mostly rejects to fill his team, playing against a bunch of jock types. Stephen uses his powers to make his team suck less, boosting their confidence, but still leaves all of the actual glory and point-scoring for himself. The coach approaches him after the pick-up game to offer him a spot on the team, with the promise that his school will have to forfeit if he doesn't play because they apparently only let six people on the team to begin with and two are out. Stephen agrees to play and is catapulted to popularity.

Just like Cady in Mean Girls, Stephen is tricked into hosting a big school-wide house party. The guys talk about a little get together just for the team and then invite the whole school via Twitter. Stephen gets to make out with a very popular girl and Astrid catches him. When he asks why she's upset, she doesn't want to answer so Stephen "accidentally" reads her mind, discovering what he should have known for years (or at very least, episodes): She's in love with him.

The basketball plot is entirely meaningless except for providing the set up for this moment between Stephen and Astrid.

Jedikiah to Stephen: I will take your powers if I have to.

Double Agent Extraordinaire Stephen tells Ultra that, after his partner's death, he needs a little break from the field. Uncle Jed grants the request, but makes sure that Stephen is fitted with a wrist cuff (it looks like a digital watch) that suppresses his powers. Think of it like a house arrest ankle monitor, but much more effective.

Stephen doesn't love not having his powers, but it doesn't stop him from trying to save the day. He figures out how the Tomorrow Person rapist is operating and goes to the sewers to catch him in the act with his latest victim. Luckily, Stephen gets there before the rapist can, um, get started, and he basically startles the guy into letting the victim go. Remember though, the rapist is a Tomorrow Person, so Stephen is pretty powerless against him. Despite the suppression cuff, Stephen is able to send a telepathic S.O.S. to Cara, and she and John come to save the day just in time. Stephen turns the rapist into Ultra and gets his powers back, but not before Jed reminds him that, family or not, he would have permanently stripped Stephen's powers if need be. He then reveals that the rapist described Cara to his Ultra guards and Stephen fruitlessly plays dumb.

Stephen to Anyone Who'll Listen: I saw my dad!

While he's almost drowning after his brief fight with the Tomorrow Person rapist (before Cara and John arrive to save the day), Stephen goes to a mental limbo that looks like the visual effects department was trying to recreate Harry's limbo from Deathly Hallows Part 2 using only leftover CGI from Sliders. There, he sees his dad and has a little cryptic banter before he comes to. Now, he's set on finding his father more than ever.

What did you think of this week's confessions?