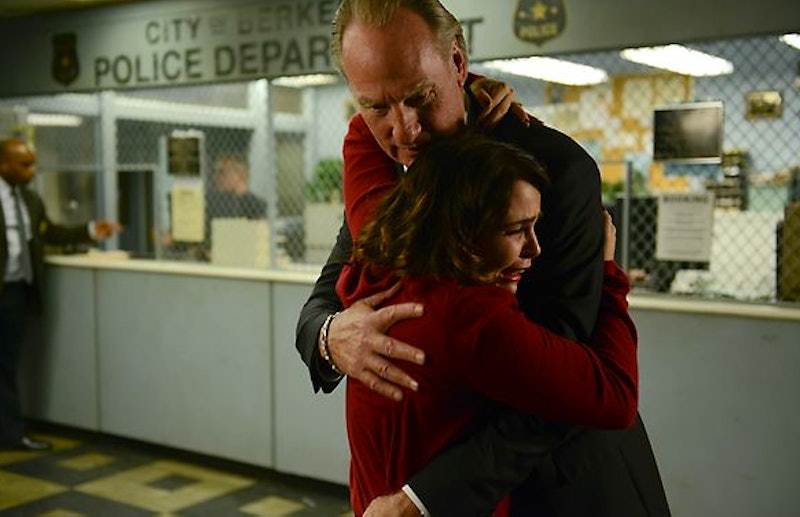 Parenthood continues to stress me out way more than it has any right to. And, honestly, I have a hard time pinning down how I feel about Thursday night's episode. Because, for some characters, nothing huge really happened. But, for others, it feels like the whole world's about to explode. So let's break it down by character again, shall we?

Anyway, Max asks, Max gets rejected. (She does live in Minneapolis and didn't even make an effort to flirt with him, after all.) Hank tries to push the two together like some weird Fiddler on the Roof — he attempted to talk Ruby into pretending to be his girlfriend, which is truly terrible advice. Sarah tells him as much, and that's pretty much her only role this episode.

Crosby and Jasmine (Jabbar, too)

Jasmine's super excited about voting and democracy, so Crosby lies to her and pretends he is, too. But the truth? He's never voted before (bad Crosby!) and shows up on election day expecting to be able to register day-of. (Spoiler alert: That is not allowed.)

Instead, he tries to trick Jabbar into thinking "public voting" is a thing, when it really is not. Then he feels bad enough about not voting that he BUYS A VOTE, which, by the way, is SUPER DUPER ILLEGAL. Best line? "He was a trustworthy man! I mean he sold his vote, but he was trustworthy."

We're on the last leg of Kristina's mayoral campaign. Surprise! She lost. But she's also the kind of person who calls people "ding-dongs," so she's going to be the most adorable old lady in all the land someday and everything is going to be alright.

Poll: Is this show ever going to show Haddie's face again?

Amber's storyline this week is adorable! So let's tackle her first before we get to the horrible part of Thursday's episode. Because Amber sang backup on one of the band's tracks this week! Amber singing again has been one of our dreams for this show since her open mic night in Season 1, so we were pretty damn happy/teary/etc.

Adorable musician friend was also present, and he was doing that thing again where he smiles at Amber and looks at her like she's some kind of goddess. It is still eating me alive. The lyrics? "I still want you more," and damn, yeah, he does still want her more.

Amber is, of course, still engaged and committed. But considering that's about to turn into a trainwreck, I'm not gonna dock myself for shipping it pretty hard this episode.

Speaking of which: Ryan! Ryan is in a pretty rough place this episode: He waited for Amber to come home and she showed up late (because of aforementioned career goodness) and was mildly upset and possessive. Then the conversation turned to Amber asking him about those pills that she found in his clothes last week. With that comment, Ryan became even more upset.

So is Ryan abusing prescriptions again? Maybe. I don't know. All I really know is that Amber went out for drinks with the band later in the episode to celebrate her work on the track (and it's a big deal! A good big deal!), and Ryan was none too pleased. In fact, he showed up to pick her up and then immediately pummeled the living shit out of attractive musician friend.

The next time we see Amber, she is at the police station crying into Zeek's arms. So that's a charming cliffhanger that is the epitome of fun and sunshine and that no one predicted literally at all!

Oh, these two. What are we going to do about these two? They're obviously buried neck-deep in marital capital-I Issues, and that was only exacerbated tenfold this week by the fact that it was Victor's first week getting sent back to the fourth grade. Julia's feeling lost and trying to refrain from only confiding in not-her-husband Ed, so she goes to Joel at work. Joel does not react kindly to this at all. There is yelling, there is storming out, and there is me stressed out at home, wondering when the hell this thing is going to come to a head. What's so tough about the Joel and Julia situation here is that neither of them are entirely in the wrong — Julia has made mistakes in the past, particularly in regards to allowing Joel room to grow in his career. But just the same, Joel is either completely oblivious to or cruelly ignoring the obvious pain his wife is struggling with right now. It's these resentments that are bubbling up every time these two try to talk to each other. It begs the question: What will be the straw that breaks the camel's back? And will it be named Ed?

So what's next? Are Julia and Joel headed for the big D (divorce, not the dirty one)? Or can some intense marriage counseling, a shedding of their resentments, and a good old-fashioned Jim and Pam Marital Strife Hug (below; it's a crappy video, but you get the point) fix everything? I'm steadfastly hoping for the latter, and next week's episode is called "All That's Left Is The Hugging," so make of that what you will.

As for the young'uns, it was clear even before Ryan's assault of a perfectly innocent person that he's been struggling with Amber having such a burgeoning creative and professional life when all he has is her. Amber dumped him the last time around when he flew off the rails — but that was before she'd committed to him. So what about this time? We can't say we're exactly