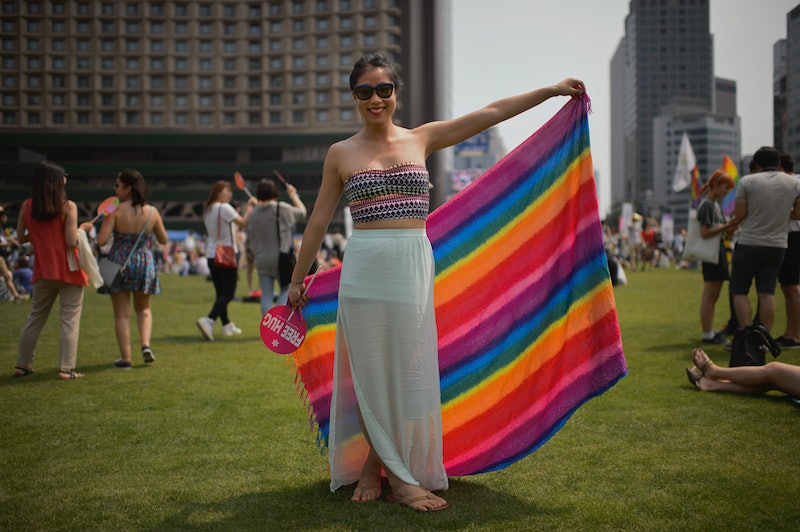 It's easy to see why everyone is talking about love in the wake of the Supreme Court's recent same-sex marriage decision (even Justice Kennedy talked about love in his majority opinion, which is quickly becoming the most viral Supreme Court text ever). Now that same-sex marriage bans have been ruled unconstitutional, there are definitely a lot of happy feelings at play. But, at the end of the day, government isn't really about regulating or respecting people's emotions, it's about establishing citizens' equal rights under the law. And as these quotes about equality show, pride is about more than love. It's about ensuring all Americans get to exercise the same fundamental rights.

So basically you don't have to be some sappy, dewy-eyed love promoter to appreciate what happened here. As always, if you don't like same-sex marriage, then you don't have to get one. Otherwise, if you continue to object to gay marriage as a legal matter, it basically means that you are OK with the government playing favorites with tax breaks and so on. This year's Pride celebrations stood in recognition of rights that were already deserved by the LGBTQ community as equals, that are just now being legally recognized.

1. "They ask for equal dignity in the eyes of the law. The Constitution grants them that right." — Justice Anthony Kennedy

2. “Whatever is my right as a man is also the right of another; and it becomes my duty to guarantee as well as to possess.” — Thomas Paine

4. “Equality is the soul of liberty; there is, in fact, no liberty without it." — Frances Wright

5. “Equality and freedom are not luxuries to lightly cast aside. Without them, order cannot long endure before approaching depths beyond imagining.” — Alan Moore

10. "A man has rights which neither god nor king nor other men can take away from him, no matter what their number, for his is the right of man, and there is no right on earth above this right." — Ayn Rand

11. “The only stable state is the one in which all men are equal before the law.” — Aristotle

13. “The Pledge of Allegiance says 'liberty and justice for all'. Which part of 'all' don't you understand?” — Pat Schroeder

14. "As you grow up, always tell the truth, do no harm to others, and don't think you are the most important being on earth. Rich or poor, you then can look anyone in the eye and say, 'I'm probably no better than you, but I'm certainly your equal.” — Harper Lee

15. “Being all equal and independent, no one ought to harm another in his life, health, liberty, or possessions.” — John Locke

17. “The humanity of all Americans is diminished when any group is denied rights granted to others.” — Julian Bond

18. "The Constitution is colorblind, and neither knows nor tolerates classes among citizens.” — John Marshall

19. "Equality lies only in human moral dignity. ... Let there be brothers first, then there will be brotherhood, and only then will there be a fair sharing of goods among brothers.” — Fyodor Dostoyevsky