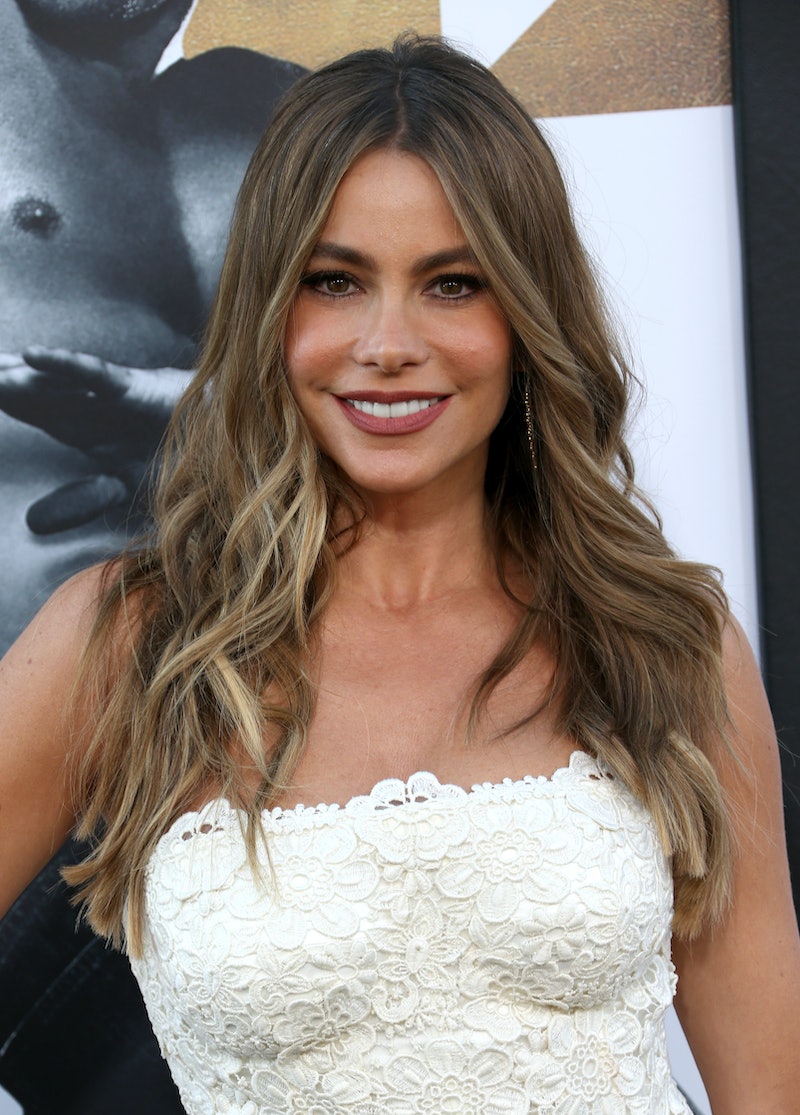 Sofia Vergara may be prepping for her wedding to Magic Mike XXL star Joe Manganiello, but over the weekend she took on the role of bridesmaid for her friend's nuptials. Vergara posted several photos of the beautiful wedding to her Instagram account on Saturday, June 27, and was a vision — along with the bride and other members of the wedding party — in a pale chiffon gown accented by a sweetheart neckline. Manganiello, of course, attended the wedding as Vergara's date, looking dapper in a white collared shirt, dark jacket, and matching pants. Each photo was stunning, but my personal favorite was a snap of Vergara slicing her fork into a massive piece of wedding cake. Not only does the photo cater to my sweet tooth — and remind me I just ran out of ice cream — the caption for said photo serves as an anecdote we can all enjoy.

"It's bad luck if you don't eat wedding cake," she wrote. I've never needed much cajoling when it comes to partaking in pastry, so the aforementioned superstition is one I can truly get on board with. Inspiring anecdotes are old hat for Vergara. The Modern Family actress has always been a strong role model when it comes to things like confidence, body image, and refusing to settle when it comes to matters of the heart.

Without further adieu, let's look at some of Vergara's rules of thumb that we can all abide by.

In an interview with Self, Vergara talked about eschewing fears of not being able to make it as an actress in the competitive world of Los Angeles.

"When I moved to L.A. six years ago to start acting, after being a TV host, I'd never taken an acting class. But I said I'll try it for six months, and if nothing happens, I'll go home. What is the worst that can happen? Now I'm nominated for an Emmy, so it worked out. The only way to gain something is to take a risk at something. I've been rejected for many jobs, many movies, but I don't take it as a failure. I just move on."

2. Be Supportive Of Your Bae

The above tweet is just one of the many instances Vergara has shown her support for her love, Manganiello. Her beau obviously reciprocates the support as these two continue to top our list of cutest celebrity couples ever.

Vergara's thoughts on bravery and overcoming fear are truly inspiring. She was quoted as saying, "I'm fearless. I don't complain. Even when horrible things happen to me, I go on."

One of my favorite trends that has graced social media is the makeup-free selfie. Vergara took part in this trend by posting a stunning bare-faced photo to her Instagram. The actress consistently exudes confidence and encourages fans to be comfortable in their own skin.

It may be hard to imagine Manganiello as anything other than a heartthrob, but Vergara wasn't initially impressed by her now-fiancé's aesthetic. "I thought he was very handsome, but I was not interested," she told Ellen Degeneres. "Too handsome...Yes, there is such a thing as too much. Or so I thought..." Vergara has also described Manganiello as holding the semblance of the alien E.T. It just goes to show you that there really are no rules when it comes to the laws of attraction.

7. There's No Wrong Way To Break The Ice

Vergara and Manganiello's relationship actually began when Vergara confronted the actor for checking out her butt at a White House Correspondents' Dinner in 2014 — seriously! "It was really funny because I didn't know that had happened until I started really going out with him," Vergara told Meredith Vieira in an interview. "Somebody sent me the pictures and I confronted him about it and he was like, 'Yeah, I can't excuse myself. I was there.'" The actress went on to note that she was able to laugh off the would-be awkward incident and it actually sparked a good conversation between her and Manganiello.

So there you have it — Sofia Vergara's rules to live by. If it guarantees us a life like hers, why wouldn't we follow her advice?