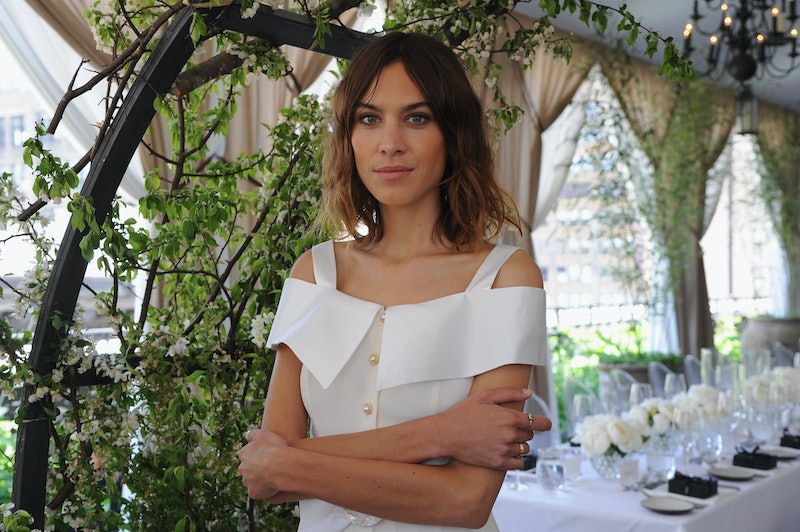 I'm still not tired of summer festival style, which is great news for anyone who's with me, because the photos coming from this weekend's Glastonbury Festival in Somerset, England are pure fashion gold. Take Alexa Chung's Glastonbury Festival fashion, for example: Hunter wellies, blue denim jackets, and colorful skirts are making my eyes beam with joy.

Glastonbury style has its own set of rules, as the muck of England's damp climate becomes just as much a fashion accessory as anoraks and fringe. This year, as if we weren't already fabulously spoiled and delighted by a spotting of Adele in her super rad ensemble, one of our favorite U.K. fashion It girls has given us not one, not two, not even three, but four Instagram posts of her weekend festival outfits.

Alexa Chung has epitomized her own personal style as the clever and modern girl who keeps the fun in fashion and never looks like she's ever trying too hard. Her style and fashion sense have been copied and sought after since she appeared on the scene in the early 2000s, becoming a muse to her generation.

Her looks from this weekend can be easily translated into your own versions of her outfits as her down-to-earth, effortless style always illuminates her personality and penchant for having a good time full of friends and good music.

She starts off her Glastonbury weekend with a simple sweater and skinny jean combo with a pair of sunnies. You can't go wrong with a llama print and boots.

As the sun comes out, Alexa's got it covered with a turtleneck shirt dress and what appears to be a red and gold scarf to accessorize. The wellies have assumed their natural muddy state.

Sporting a beloved denim jacket paired with a green maxi skirt, she's ready to get into the music and dance the night away.

Girl can still rock a several-year-old trend with the black tights and denim shorts look. She keeps it real with yet another denim jacket that reads 'China' on the back and those boots for easy trudging through the festival grounds. Her festival hair is simple — either let down or loosely halfway pulled back.

Her style carries a simple appeal — be yourself, don't try too hard, and you've got it. You're an inspiration, Alexa Chung.