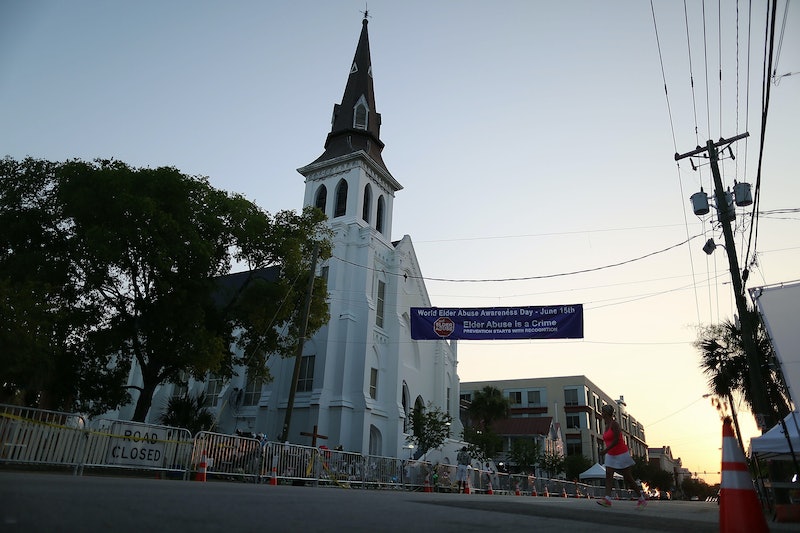 While millions of Americans are celebrating the legalization of same-sex marriage in all 50 states, there is also reason to mourn, as the Black community is under siege, once again. This past week, a string of alleged arson attacks were made against six churches with predominantly black congregations in four Southern states, reports. These, approximately one week after Dylann Roof allegedly shot and killed nine churchgoers at Emanuel AME Church in Charleston, South Carolina. On Monday, June 22, the College Hills Seventh Adventist Church in Knoxville, Tennessee was set on fire early in the morning, according to local WATE 6. The following day in Macon, Georgia, God's Power Church of Christ was on fire and on Wednesday, June 24, Charlotte, North Carolina's Briar Creek Baptist Church was ablaze, resulting in nearly $250,000 in damages, according to Southern Poverty Law Center.

On the same day, Fruitland Presbyterian Church, a historical black church dating back to the 1800s in Gibson County, Tennessee also caught on fire. Then came fires at the Greater Miracle Temple Apostolic Holiness Church in Tallahassee, Florida and College Heights Baptist Church in Elyria, Ohio.

These blazes come at a suspicious time, as we're currently re-examining the state of race-relations in the United States. There's growing public pressure to reconsider the place for the Confederate flag in government buildings, the American marketplace, and in public spaces, after all. But there’s one thing that's certain: there hasn’t been enough media coverage on this chain of alleged arson attacks, and while there is no reason that could justify this lack of coverage, here are three possible explanations as to how this story got overlooked.

Reason #1: These Fires Are Still Under Investigation

The investigations on the string of alleged arson attacks are still ongoing and it would make sense for media organizations to withhold from posting information on these supposed attacks until they receive further information. However, not having the full story never stopped cable news programs from covering alleged attacks and tragedies as they break, nor does a lack of information prevent media from speculating on the party responsible for such case. (Remember the initially horrifying coverage of the Boston Marathon bombing?)

For centuries, churches have been a centerpiece and stronghold for black communities. Attacks on churches predate the Civil War, and have continued until present day. In fact, in the late 1990s, then-President Bill Clinton issued a task force investigating church-arson cases, leaving behind an astounding 827 open investigation before the task force's termination.

How do we, as a nation, address these attacks on black churches and prevent them from happening again? For starters, we can recognize each and every alleged arson attempt or success, and keep the conversation going.

Reason #2: The SCOTUS Decision To Legalize Gay Marriage Took Up Most Of The Airtime

What’s interesting about the copious amount of coverage on the big win for gay marriage is the lack of discussion when it comes to persons of color in the LGBTQ community. Just days before, President Obama made headlines for silencing an undocumented immigrant transwoman for interrupting his speech on behalf of the numerous deportation and injustices made against her community. Still, within the LGBTQ community, black individuals face their own challenges and some of the sentiments echoed by the community is whether the momentum stops right here. Will persons of color in the LGBTQ community receive or gain the same level of support, now that the biggest hurdle for gay rights has been tackled successfully?

Considering how the voices of persons of color in the LGBTQ community are not often heard, it makes sense as to why these six churches that were allegedly burned down had a lack of media coverage: the distraught and frustration within the black community is still not heard.

Reason #3: The String Of Alleged Arson Attacks Do Not Have A Victim To Blame

The names Michael Brown, Eric Garner, and Freddie Gray have become household names. Immediately after news broke of their deaths, cable news and several online news outlet began digging up dirt on the victims. The word “thug” was reserved for kids like Michael Brown and protesters that unleashed their fury on the streets of Ferguson and Baltimore. Instead of condemning NYPD Daniel Pantaleo for not loosening his grip when Garner shouted “I can’t breathe,” some political pundits chose to highlight that Garner might have been selling cigarettes illegally. Rather than focusing on how Freddie Gray might've died in the hands of several police officers, his arrest record became the focus of attention and pundits said he was "no saint." These victims of police brutality had their character assassinated by some reporters.

The story of the alleged string of arson attacks on black churches might not be getting as much coverage as it deserves because there are no victims on which to shift blame, or to dig up dirt on.

The historical significance of black churches in the South is far too important to be ignored. It’s time we start talking about it.

More like this
10 Times Boris Johnson Got It Wrong On Trans Rights
By El Hunt and Sam Ramsden
Manchester Arena Attack 5 Year Anniversary
By Ella Glover
Michigan’s Governor Is “Going To Fight Like Hell” To Protect Abortion Access
By Andrea Zelinski
How To Fight For Reproductive Rights, Based On How Much Time You Have
By Courtney Young
Get Even More From Bustle — Sign Up For The Newsletter