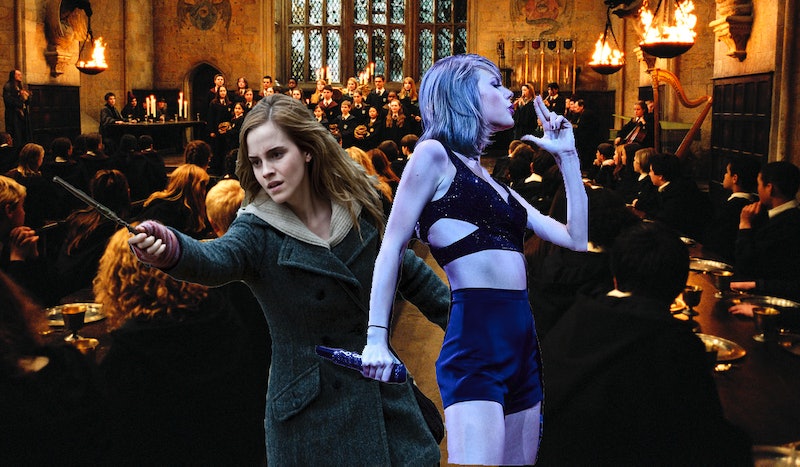 It finally happened, you guys, our favorite feminists made friends. That's right, a group shot was posted by Laura Aquilina picturing Taylor Swift with her arm around Emma Watson, leading us to believe that the He For She advocate is the latest addition to the beloved Girl Gang. And while this fills me with the feeliest of feels, it did take a long time to get to this place, and I do wonder if this union would be as smooth under different circumstances. In fact, I'd be willing to bet that that Taylor would've gotten it off to a rough start if she went to Hogwarts with the one and only Hermione Granger.

While Emma and Taylor both have a lot in common (thrust into the spotlight at a young age, similar set of feminist values, universally loved by anyone who has ears, eyes, and a heart), young Taylor and Hermione would probably boast clashing personalities. After all, the New Feminist Taylor we know and love now was a completely different girl than 2006 Taylor. Plus, Hermione tends to be a little more practical than Taylor, who is all kinds of whimsical. The pop star would urge Hermione to shake it off, and Hermione would be like, "No, books."

So I'm thinking if Taylor was enrolled in Hogwarts, this is how her tenure — and subsequent friendship with Hermione — would go.

Well, first year the Sorting Hat would put Taylor in Gryffindor house with the trio.

Some may argue Taylor makes a convincing case for Hufflepuff, but let's be real, Taylor would end up in the ~most mainstream~ of Hogwarts houses. That aside, she's brave at heart, making stands against Apple Music and Spotify. Expect Taylor as a background character in the early years, gossiping with the likes of Lavender Brown and Parvati Patil. Hermione reserves a special side-eye for her.

Second year Taylor basks in a charming awkwardness and extends a friendly hand to Neville Longbottom, assimilating ever silently into the core Gryffindor group.

Nobody notices her because her curly blonde mane and slender good lucks are obscured by GLASSES.

Third year Taylor becomes a star pupil, stunning everyone with her girlish enchantments.

Professor Lupin is so impressed by how quickly she's able to vanquish the Boggart (which, incidentally, is an older Taylor dying alone with a mountain of cats). People are really appreciating to her newfound bubbliness, and charmed by her endearing faux-shock, but Hermione remains unimpressed.

Aside from going to the Yule ball with Harry (leaving Cedric Diggory with Cho Chang as a consolation prize) she has flings with Seamus Finnigan, Dean Thomas, and both Weasley twins. Neville... not so much. Hermione, not fully embracing her feminist roots yet, thinks all this serial dating is "rubbish" but that's not what upsets her. No, Hermione only gets upset when she attempts a slow-motion hot girl entrance on the way to the dance, and Taylor "clumsily" knocks her down the stairs, basking in newfound beauty.

"It's like I'm looking at her for the first time," Ron remarks later. Hermione, understandably, loses her mind, but is comforted by the fact that Taylor can't dance to save her life.

Fifth year Taylor joins Dumbledore's Army, collecting her own merry band of friends, and Hermione, in spite of herself, warms up to her... a little.

She has regular lunch dates with Luna and Ginny and her become besties. Hermione is still skeptic of the effervescent girl, and gets miffed when Neville jokes, "Maybe we should call it Taylor's Army instead!" but she has to admit that Taylor, deep down, must have a good heart. Plus, her unicorn Patronus is really cool.

Hermione and Taylor are fostering an light friendship. Then drunk with power, Taylor sets her sights on Ron and they enters a PDA-fueled tryst. Things come to a head when Hermione tearfully lashes out at her. I don't want to get vulgar, but the term "bumbling bimbo" is brought up.

Ultimately Taylor breaks it off because she says her friendship with Hermione is much more important. It's a beautiful moment for everyone, and she and Hermione part on good terms.

Finally in her seventh year, Taylor spearheads Dumbledore's Army in a valiant fight against the Death Eaters.

Wow, even Hermione had to stand up and cheer at all Taylor's efforts. It was crazy enough when she singlehandedly took on Bellatrix Lestrange, but when she killed Voldemort all on her own? That was truly impressive.

Taylor and Neville are living very happy together.

More like this
Harry Styles Is Set To Rival Tom Hardy With His Own CBeebies Bedtime Story
By El Hunt
Joe Alwyn Reacts To Taylor Swift Earning An NYU Doctorate In A Rare Interview
By Jake Viswanath and Nicole Pomarico
Harry Styles Addresses The Theory That His New Song "Daylight" Is About Taylor Swift
By Jake Viswanath
The Very Best Quotes From Dr. Taylor Swift’s NYU Graduation Speech
By Grace Wehniainen
Get Even More From Bustle — Sign Up For The Newsletter