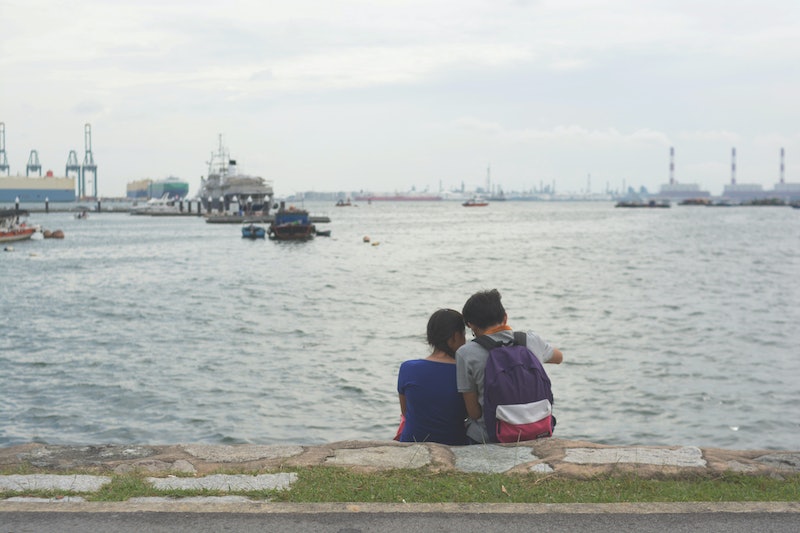 My husband and I met in college. Eleven years ago, we embarked on what has gone from dating to cohabiting to a long-distance relationship to marriage. And yes, there was the requisite "break," but even factoring that in, I don't know if there's been a day since April 2004 that we haven't communicated in some way, shape, or form. Why? Because quickly, almost effortlessly, both of us knew we were meant to be together forever.

When we met, we were creative writing majors at a really, really small college, and we had a lot of professors in common. Sometimes, I think of one of them, a young poet who'd be so moved by the writing her students shared in workshop that her voice would quiver when she spoke. Once, during a manuscript conference, between editing my poems, she asked me about my then-boyfriend-now husband. He was a junior, I was a freshmen: she'd known him before me. I don't remember what I said — something effusive — but her response always replays in my mind: "Love should be easy."

Back then, I listened to her. After all, believing love required suffering, less than a year prior, I'd OD'd on painkillers. Maybe I'd been clueless: maybe love didn't require life-threatening work.

No offense to my professor, but none of the relationship experts author Karl Pillemer consulted for his book, 30 Lessons for Loving: Advice from the Wisest Americans on Love, Relationships, and Marriage , agreed with her. Instead, they all sounded like Samantha Jones, married almost 50 years, who admitted, "Marriage is much harder than you think it's going to be." Oof.

But maybe a little relationship work isn't so bad. After all, the experts in this book haven't exactly wracking up anniversaries by accident. They've been through the real-life stuff to make unions last lifetimes, and have these pieces of time-tested know-how that will help you make your relationship less stressful, too — and give it the juice to keep going and going and going.

Stop Keeping Score Of Who's Doing Which Chores, and Take Specific Ownership Instead

I'm going to get this out of the way because it's cliché — and also totally true: living with another human being can drive you nuts. At minimum, you're two people attempting to create one harmonious space. What exacerbates domestic doldrums is what Pillemer calls "chronic" problems: issues that never go away (even if you were crazy rich enough to have butlers and servants).

The experts believe this stressor can be managed by simple and thoughtful delegation of tasks in your house, by letting each partner play to his or her strengths. So, instead of keeping score of who's doing the chore list when (and who's doing it better), take consistent ownership of something — be it being the fix-it person, or the laundry wizard — and own it. "We each have our things we do best," says Sam Myers, 76, "and that engenders the feeling that you're pulling your weight."

Leave Your Work At Work

When you and your partner are both neck-deep in your careers, it can be hard to shut down office-think, especially with work email on a million different devices. (And, I'll vouch for a pair of writers: the virtual off-button disappears when you're both trying to write books in those so-called off hours.) But the experts agree that, as important as work and careers are, keep the associated stresses and concerns as far from your marriage as possible.

In other words, "make your home a safe haven from the stress of work." This doesn't mean secrets or lies — remember that communication is still key. Too often, however, work-obsessed talk fails to satisfy both the speaker and the listener. Merle Rowe, married 45 years, notes, "it feels very personal when they come home with the bad mood and the bad attitude and the grumpy and the whatever."

In-Laws May Drive You to Vices. They Shouldn't Drive You Apart. (Mostly, They Mean Well.)

Although the experts may not have had tablets or cell phones on which to check work email when they were younger, they did have more intense relationships with their families and in-laws. As Pillemer puts it, "the boundary between the married couple and their families was much more permeable than it is today." (This makes me feel for those experts!)

Still, they have fantastic advice for how to look past a pesky mother-in-law or a distant father-in-law. "Rather than assuming the worst," according to Annie Dawson, "it's more helpful to assume that [your in-laws] are saying things to you because they want to help their child and you."

Repeat After Me: Your Kids Do Not Trump Your Relationship

Let's assume neither your feelings about procreation nor your physiological quirks have conspired to keep you and your partner from having children. Let's assume you have a child or you're on your way to having a child. Most of us probably know all-too-well that, as Pillemer writes, "kids cause stress for a marriage."

So, how to deal with that specific stress? The experts agree: "Put your marriage first." This rule may be more important than ever since human lifespans are increasing. The time you spend parenting is only a fraction of your married life. Neal Mitchell, 66, says, "The kids are a result of the two people. The relationship with the mate has to be paramount."

Make Time For Yourself As a Pair

"Carve out time with each other," says Pillemer. Even a low-key date is better than nothing. According to one of Pillemer's experts, Cecilia Fowler, "When things get so heavy and there's no joy — there's no excitement, there's no adventure." Too often, raising a family extinguishes that love-at-first-sight spark. Fowler recommends "[finding] some way to experience joy in your marriage, and don't let having kids stop you."

They'll always come back to bite you. And, as Pillemer mentions, "one gift of being married for decades is that it makes you an expert in taking the long view ... the oldest Americans know for a fact that bad times pass."

More like this
Yomi Adegoke On The Offline Diaries & The Power Of Representation
By Jessica Morgan
Are Gemini & Scorpio Compatible In A Relationship?
By Kristine Fellizar
15 Ways To Tell Someone Was Just Talking Behind Your Back
By Carolyn Steber
The Most Compatible Life Path Numbers, According To Numerologists
By Kristine Fellizar
Get Even More From Bustle — Sign Up For The Newsletter