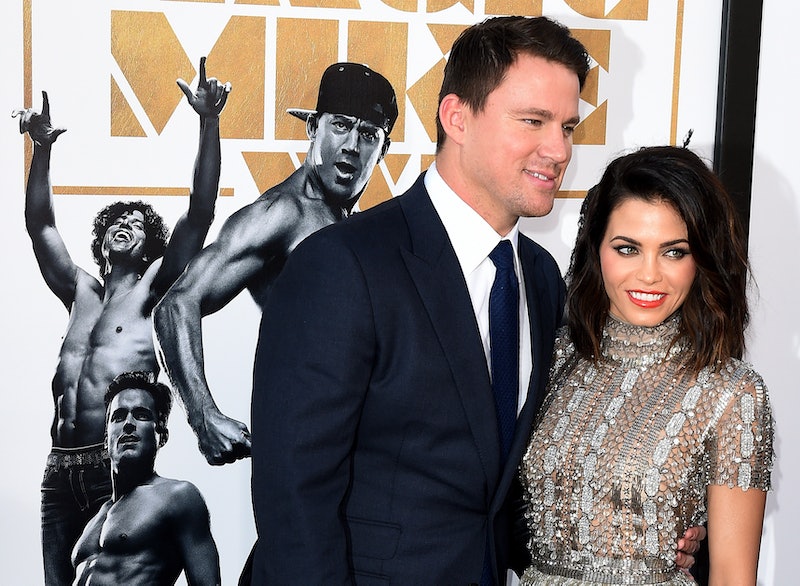 Just one take into shooting his final routine for Magic Mike XXL, and Joe Manganiello was down for the count. Indeed, much of the cast of Channing Tatum's stripper-centric sequel suffered some pain — and a few additional indignities — over the course of shooting. Stripping is an athletic, physically demanding enterprise, and even Tatum, who had danced professionally before turning to acting, came out of shooting a bit battered. But how were the actors injured during Magic Mike XXL ?

Manganiello, Matt Bomer, Tatum, and Stephen 'tWitch' Boss have all reported degrees of injury over the course of the film's shooting. Notoriously ripped Manganiello, for instance, tore a bicep during filming, he told Hollywood press during a publicity event for the film, but he managed to complete the scene anyway (and thank god he did — it features s a maneuver that "involves a sex swing with monkey bars on top," the actor told People). Recalled co-star Tatum, "This guy's bicep was hanging off his arm." Despite the injury, Manganiello rounded out the last weeks of the shoot, including the entire final routine, even though his fiancée Sofia Vergara threatened to leave him if he didn't get the arm tended to. He landed in the hospital at Vergara's behest after the film wrapped, eventually also undergoing surgery to correct the injury.

Manganiello's co-star Bomer suffered more emotional than physical trauma — during filming of the first Magic Mike, he struggled to don one of the tiny thongs he reveals in a routine. "All the holes look the same," he told Entertainment Tonight. But this time around, he seems to have mastered the skill. It was tWitch now who had some issues with his G-string, he told PopSugar, though he noted that the initial pain subsides after a few steps. tWitch, a DJ on Ellen Degeneres's show, also bravely — and publicly — waxed his entire body, "from neck to toe," for the role. Degeneres hosted his first wax, and it's well worth a watch.

Tatum, however, waxed the first time around, but resisted for Magic Mike XXL because he was still scarred by memories of the pain. Co-star Bomer told him he just had to see a better esthetician, and eventually Tatum accepted — although he might wish he hadn't. "It sucked just as bad," he told Degeneres.

So while Manganiello suffered through legitimate injury to finish the shoot, the rest only had to take on a beauty routine many women undergo every four to six weeks. ("Your wife had a baby!" Degeneres tells tWitch during his wax. "Imagine what that was like!") But Tatum, too, is no stranger to making very real physical sacrifices for a role — from the tragicomic to near-hospitalization. According to a 2010 profile in Details, Tatum acted and performed his own stunts in the film Fighting, but even the bruises he suffered as a mixed-martial-arts fighter didn't compare to an unfortunate penis burn he suffered during The Eagle of the Ninth. Apparently, the only way to keep warm was to pour a home-brewed mix of hot water and river water down his wetsuit during a scene filmed in a frigid river. One ill-fated time, though, one of the crew members neglected to dilute the hot water and Tatum poured boiling water down his suit, scalding himself all the way down. (He assures everyone that he's fully recovered now, though.)

Even more terrifying, though, is Tatum's report of the intensity he channeled as wrestler Mark Schultz for last year's Foxcatcher. In the scene, Schulz pumps himself up for a fight, punching himself a couple times in the jaw before beating his head into a mirror. According to director Bennett Miller in Cinema Blend ,

He actually cut himself, and you see his blood in that scene. This was somebody uncorking something that you can't make up. It's inside you somewhere or it's not.

Co-star Mark Ruffalo, who plays brother David Schultz, also burst one of Tatum's eardrums slapping him, and Tatum says he likely broke his hand during training, according to Variety.

Magic Mike XXL certainly does not achieve the level of darkness necessary for a film like Foxcatcher, but the stakes for its actors were still pretty real. So while you're watching those dudes and their moves, just remember the sacrifices they made, from full-body waxing to muscle injury, to bring that perfect hip swerve to the screen.