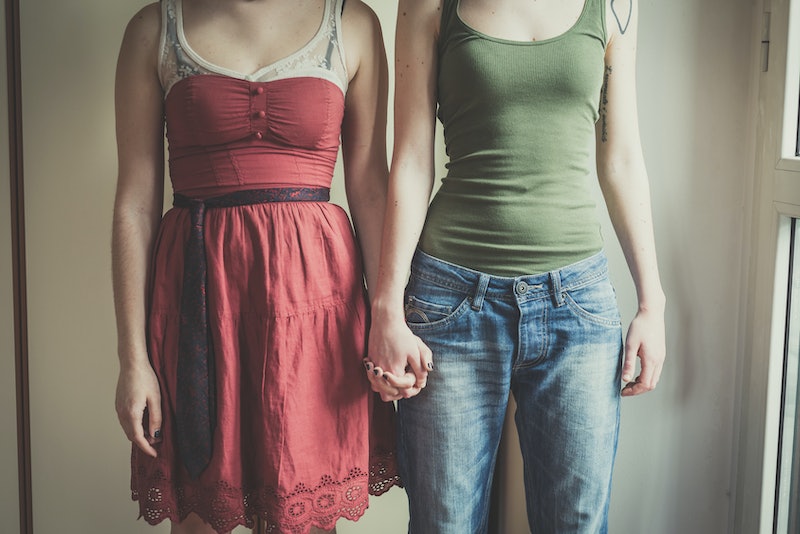 These days, we hear far less about online dating succes stories than we do about misogynistic trolls on Tinder or OKCupid catfishing. This is either because it's impossible to meet anyone online that isn't a fire-breathing psycho, or because sensational negativity just gets more clicks. I'm inclined to go with the latter, because if my social circle is any indication, people meet a lot of decent folks on the interwebs.

That's not to say online dating doesn't come with a particularly unique set of pitfalls that we're all still learning to navigate as a culture, but IRL dating is not any easier. While it seems like nearly everyone kills time on a boring Friday night by swiping right (and left, and left), the stubborn stigma against online dating remains. It's not like admitting you met in an orgy or through a Craigslist "Missed Connections" ad (which are both perfectly reasonable if you ask me), but some people are still a bit wary to reveal where they met their special someone. While it's important to share horror stories from online dating sites and apps, it's also crucial to share the good stuff. So here are 10 real online dating success stories, with "success" being defined individually, from happily-ever-after to just meeting someone who made a lasting impact.

"Despite my better judgement, I signed up for Match.com. I say better judgement because it just seemed so cheesy, but I was tired of random hookups, tbh. After getting a few decent matches, my third date from the site ended up turning into a relationship, and three years later we're newlyweds."

"I met a cool dude on OKCupid. We messaged through the site sporadically for a month or so, then exchanged phone numbers. We finally met up about 3 months after initial contact. We've been chillin ever since... every once in a while."

"I call it my Call of Booty story, because after a year of unsuccessful dates on OKCupid, I finally met a girl who I spent our entire first date playing video games with. Five years later, we're celebrating our second wedding anniversary next month."

"Met a girl I dated on and off sporadically for about 3 years on Tinder. We aren't together anymore, but it was the best sex of my life — does that count as success?"

"Kind of old-school, but I met my first boyfriend in high school on an AOL chat room. It was dedicated to music we liked, and we started chatting on AIM as a result of having similar tastes. He lived a few towns away, so I wouldn't have met him otherwise. We ended up agreeing to meet at a concert, hit it off, and going out for three years after."

"Met up with a foreigner from OKCupid with two cds in his car — Rammstein and Britney Spears. Married him 3 years later."

"I met my girlfriend of 5 years now wife for 2 years on The L Word's social media site "The Chart". We starting talking as friends first for a few months, and got to know each other very well by Skyping (she lived in North Carolina and I lived in Brooklyn). She then came to visit me and we hit it off like no other person I have ever met. She came back to visit me a 2nd time and never left. We have been together a total of 7 going on 8 years and we couldn't be happier than the day we met."

"I met my boyfriend of 4 years on Grindr. What started as a one-night-stand developed into my longest relationship yet."

"Met a girl on OKCupid. We dated for a few months and it didn't work out, but she did end up becoming one of my best friends."

"I'm still dating a guy I met on Tinder last year. We'll see, but so far so good."

More like this
Here’s What TikTok's "Mascara” Trend Is *Really* About
By El Hunt
23 Super Sweet Things To Write In A Valentine's Day Card
By Karen Belz and Lexi Inks
The 3 Zodiac Signs Most Likely To Get Married Later In Life
By Kristine Fellizar
4 Zodiac Signs That Will Take Forever To Admit They Like You
By Kristine Fellizar
Get Even More From Bustle — Sign Up For The Newsletter
From hair trends to relationship advice, our daily newsletter has everything you need to sound like a person who’s on TikTok, even if you aren’t.