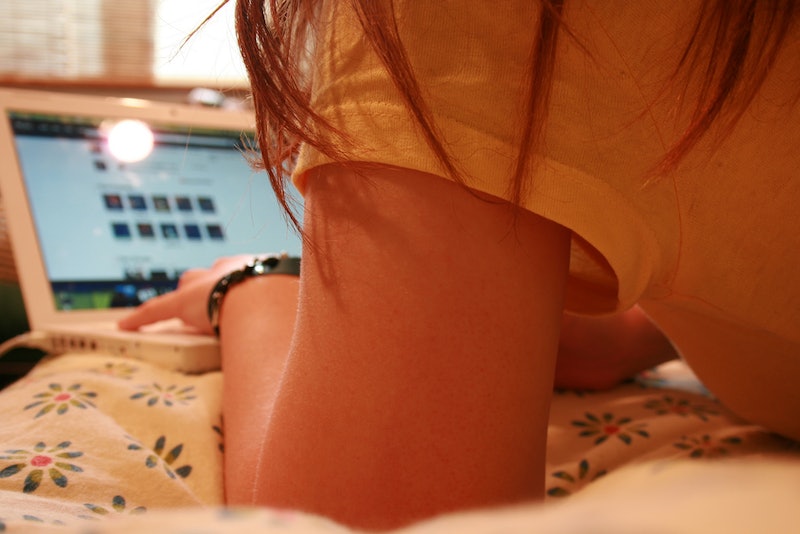 Trolling is a major threat to any woman with an online presence, whether she's ousted out of the gaming community, verbally attacked for calling out sexism in her writing, targeted for discussing social justice on social media, or — perhaps the most common concern — harassed on dating websites and apps. While many of us will simply hit "delete" and perhaps "block" and "report" when we receive messages like "hi would you tell me how you would chop my dick off" or "your [sic] a judgmental bitch," some women just profiled by The New York Times respond to trolls far more creatively.

It's popular belief that publicly shaming anyone, even harassers, is rude, and women often feel pressure to be nice even to those who don't deserve it. But while two wrongs may not make a right, they do make for some hilarious ways to hold trolls accountable for soiling women's online dating experiences. Besides, perhaps it's time women stop trying to be "nice" by accommodating people who make them uncomfortable and start doing themselves and other women a favor by refusing to let trolls harass women without consequences.

Trolls know exactly what their fate is if they mess with Brincefield, whose Tinder experience sounds uncannily familiar to any woman who online dates:

Married men propositioned her for sex. Guys lashed out if they didn’t get a reply in a timely fashion. Various men sent naked selfies.

And they weren't about to get away with it. After blocking didn't work — some users would create new accounts and find her again — Brincefield started taking screenshots of her messages and uploading them to her profile with captions like “Tinder is not the solution to your marital problems.” This tactic has been fairly successful in warding off trolls with little collateral damage: One user who contacted Brincefield said his main reaction to her profile was "This girl's hilarious" — proving that the people worth our time won't take issue with us standing up for ourselves and other women.

2. Alexandra Tweten started a troll hall of fame on Instagram

Tweten's Instagram Bye Felipe, a spinoff of the dismissive slang saying "Bye Felicia" from the 1995 movie Friday, started off to publicly shame the trolls targeting her but became a venue for many women to air their online dating grievances with screenshots of their unwelcome messages. The Instagram, which now has 319K followers, is for "taking away that power that [trolls] think they have over women," Tweten told The Huffington Post last year.

(In case anyone's wondering if women get messages this bad on a regular basis, we do.)

Gensler lets her trolls know exactly how ridiculous they look by drawing cartoons of them based on their messages and profiles for her Instagram instagranniepants. Humiliating? Sure, but if they didn't want to look like idiots, while, maybe they shouldn't have made themselves look like idiots.

Oh yeah, and did I mention she has also mastered the art of counter-trolling?

Rule of thumb: guys who make sure everyone knows they are "nice guys," that they "know how to treat a woman," or any variation of these claims may not, in fact, be nice, which the Tumblr Nice Guys of OKCupid hilariously exposed. Unfortunately, this Tumblr is no longer active, but it spawned the hashtag #niceguysofokcupid, which online daters all over the Tumblr- and Twitter-sphere are still using to expose nice guy syndrome.

24-year-old Nowak created Feminist on Tinder as a way to document the abuses she saw on the hookup app. Her first two Instagram accounts were subsequently shut down, so now Nowak sticks to Twitter and Tumblr to post interactions with some of the very worst that the male species has to offer.

A. Lynn is the proprietor of the Tumblr Sexism! As Seen On Facebook. According to the account's FAQ, its mission is to "join together with others who oppose sexism in a big SIDE EYE to everyone who posts and shares misogynistic material." More of this, please.

Tinder Nightmares isn't billed as a feminist Instagram, nor is it necessarily a platform for women to call out online harassment, and yet, most of the so-called "nightmares" are really just horribly sexist exchanges. Apparently, they have an upcoming book collecting some of them, too.

This Tumblr collects screengrabs of all kinds of misogynistic, sizeist, and racist comments one woman has received from OKCupid, Plenty of Fish, et al. It's not just Tinder that attracts the class acts, kids!

Like recent efforts to get victims and bystanders to "holla back" at street harassers, the push to talk back to trolls stems from a commendable desire to show men what behavior is and isn't acceptable but shouldn't be expected from every woman. Sometimes, when your OKCupid inbox makes you feel the need to shower, you'd rather just hit "block" and move on. And often, women are justifiably afraid that their harassers will surface under different usernames or track them down in other ways. The risks of calling out trolls aren't worth it to everyone, but we're still grateful for the women who have taken that risk so that maybe fewer of us will have to one day.

This piece was written jointly by Suzannah Weiss and Kristen Sollee.