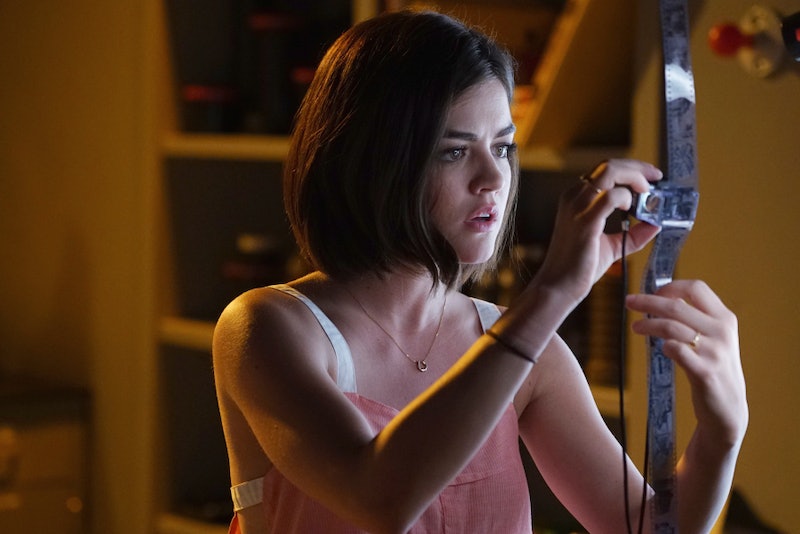 Is there any character in the history of television that's been regarded with such equal amounts of love and suspicion than Pretty Little Liars ' Aria Montgomery? Granted, pretty much everyone on this show has been held under the A microscope at some point or another, but Aria's innocence (or rather, lack thereof) in the whole A Team thing has been the biggest head scratcher by far. Is she secretly working for A? IS SHE A HERSELF? These are all questions that, for now, must remain unanswered. (Sigh.) But (shady tendencies aside) that doesn't mean that Aria isn't also extremely relatable a majority of the time. In fact, I bet many of us would be considered the Aria Montgomery of our friend group, especially when it comes to running into an ex-boyfriend.

I mean, just think about how awkward that would be? And it's bound to happen to everyone at least once in their lifetime at the most inopportune time. Probably just after getting a really bad haircut or on laundry day. (Hello sweatpants!) But fear not, my friends. Aria Montgomery knows your pain and completely understands what you're going through. Need some concrete proof? Here are all the times this Liar was you at every awkward ex encounter.

1. When You Curse Your BFF For Not Telling You He Was In Town

2. When You Try To Make Eye Contact In The Most Subtle Way Possible

Which always ends up being not subtle at all. Why won't he just look over here already?!?! Thankfully, I'm having a good hair today.

3. When You Notice There's A New Girl Right Next To Him

4. When You Then Pretend To Be On The Phone With Your New Boyfriend

Making sure to speak loud enough so that he'll definitely overhear your side of the conversation. (While you secretly pray that your phone doesn't actually ring throughout this fake interaction.)

What is even happening right now?

6. When You Start To Remember All The Reasons You Initially Broke Up

Like his cocky attitude and overall disregard to human decency.

7. When You Realize His Flirtation Doesn't Affect You The Way It Used To

Sorry, "buddy," but it's not gonna happen. We're dunzo for good.

8. When You Successfully Win The Conversation

Not only did you just get a promotion at work — which you made sure to bring up — but you also came across as super breezy and casual. Almost as if this whole interaction wasn't completely torturing you on the inside. #NailedIt

9. When You Finally Give Your Emotions Free Reign Back In The Comfort Of Your Home

Even successful run-ins with exes are exhausting. Let's never do that again, shall we?

For more Aria coverage, check out Bustle's PLL podcast below: