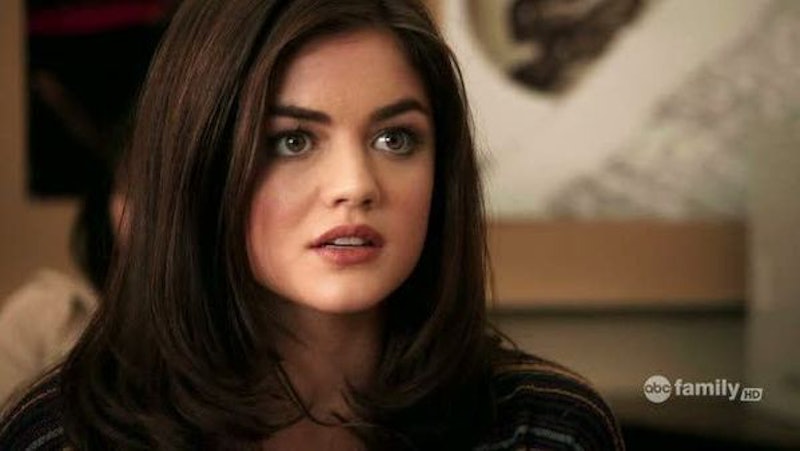 Any true Pretty Little Liars fan knows that clues about A's true identity have been hidden in plain sight since the very first episode. We now know (or do we?) that Charles DiLaurentis is Pretty Little Liars' Big A, but that doesn't mean there aren't more secrets to unveil, especially about the Liars themselves. Aria, Emily, Hanna, and Spencer have been a veritable font of secret information since the pilot aired, and, if you look at that first episode closely, there are actually some pretty big clues that Aria might be on the A team.

This isn't the first time I (or any PLL fan, really) has suspected Aria of working with A, or being A herself. The theory is usually centered around the Montgomerys' supposed year-long trip to Iceland that took place off-camera just before the events of the pilot. Many, like takeanempanada on Tumblr, believe that Aria didn't actually go to Iceland — instead, she spent a year at Radley. The three biggest arguments that support this theory, as outlined by takeanempanada, are as follows: Eddie Lamb recognized her when she started to volunteer there, she had an existing patient file with Dr. Anne Sullivan (who's back, BTW), and last but certainly not least, A's reign began when Aria returned to Rosewood. Sure, these could all be coincidences, but I think we can all agree that nothing on PLL is really an accident. Too much has hinged on small details and minor characters for that to be true.

But just saying that pilot proved Aria's lack of innocence isn't enough. For the sake of science and the sanity (or whatever's left of it, really) of all PLL fans out there, I re-watched the pilot and found these 12 clues that prove that Aria could really be on the A team. Brace yourselves, people.

1. Aria Was The First One To Wake Up That Night

Spencer may have already left the barn, but we've since established that she was using drugs that night and had gone out to fight with Ali. Really, her absence from the barn alongside Ali's is no longer an issue. However, the fact that seemingly nothing woke Aria up makes me think that maybe she wasn't asleep at all. Maybe she was pretending to be asleep after eavesdropping on Ali and Spencer's fight.

2. She Was The Only One Who Left Rosewood After Ali Disappeared

Nothing says "guilty" like running away. It also is very "A"-ish to let the girls get comfortable and/or isolated while plotting revenge, and Aria's departure seemed to have separated them even further than Ali's disappearance.

3. She Told Her Mom Of Ali, "I Still Think About Her Every Day"

If you remember the scene in which Aria first meets Ezra, they're at the Hollis Bar & Grill. Aria is at the bar ordering food, and when she turns to face Ezra during their first conversation, you can see that she has what looks like a beer in front of her. I'm pretty sure that, despite the fact that Rosewood has a less-than-upstanding justice department, the drinking age is still 21. This would mean that Aria had access to a pretty decent fake ID, since I doubt a college bar wouldn't card her. You know who else has access to pretty decent fake IDs? A.

5. She Told Ezra That She Writes, But "It's Personal"

A has some serious journaling skills, the most recent of which have been attributed to Andrew Campbell. Maybe A(ria) felt it was time to release her writing unto the world, and so began all of the A messages.

6. She Got The Very First A Text

There's no way this isn't significant. While it's certainly possible that the fact that she received the text means she isn't A, it could mean that she's on the A team. This could've been A's way of telling her that it's time to get the ball rolling.

7. She Was Initially Trying Harder Than Ezra To Start A Relationship

Maybe she already knew about the book he was writing about Alison, and wanted to start a relationship with him so she could figure out what he knew. It would certainly be a sneaky way to, quite literally, get in bed with the enemy.

8. She Told Emily She "Felt Like An Outsider" In Rosewood

This could be another red flag regarding Aria's A-team status. We all know that A preys on those who feel like outsiders (Lucas, Mona, Shana, etc.), so maybe A found Aria in this vulnerable state and recruited her.

9. She's The Only One Who Left Ali's House After The Body Was Found

Think about it: Emily went to Maya and stayed with her, Hanna went closer to the house to see what was happening, and Spencer went to see what had happened, even though she kept her distance. Aria is the only one who turned her back to the house. Is it because she already knew that the body they found wasn't Ali's?

10. She Knew That Hanna Was Questioned About Shoplifting

How could she possibly have known that? It wasn't a formal arrest, so it wouldn't be a matter of public record, and it's not like it happened so much earlier that there was that much time for word to get out, no matter how small Rosewood is. It's more likely that she was watching Hanna, or knew someone that was.

11. What Was Aria Looking At Before Ali's Funeral?

You may remember that, before Ali's funeral, Aria was already inside when everyone else arrived, staring out of a window, before Ezra so rudely interrupted with a half-assed apology and a pretty awkward kiss. But what was Aria looking at? Was she watching everyone arrive, making sure they all showed up? Was she waiting to see if A would be at the funeral? I mean, people don't just stand in churches and look out windows for no reason, in my experience.

12. Overall, The Story Was Pretty Much Focused On Aria Until A Took Over

Aria has always inadvertently come across as the main character of Pretty Little Liars. She's got the spotlight in the opening credits, and she was pretty much the main focus of the entire pilot, with the others girls' lives seeming more like semi-important subplots. That all changed when A came back into the picture, but what if, this whole time, the switch from Aria to A was really no switch at all? What if the focus on Aria in the very beginning was meant to clue us in to the fact that we should be focusing on her for the rest of the series? I wouldn't put it past the writers to tell us who A is in the very first episode, and it might also explain why no one would tell Lucy Hale who A is.