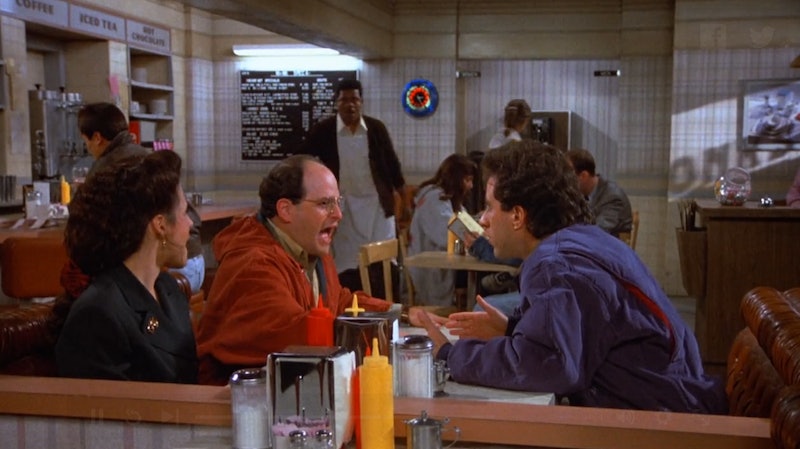 We fans delight in the longstanding conversation about Seinfeld's contributions to modern comedy. However, this discussion tends to overshadow those about Seinfeld’s other achievements and misgivings, such as those in the realm of social change. Years before the topic of homosexuality earned showcase in the likes of Ellen and Will & Grace, and even before it found regular work as a lazy punch line in series like Friends, Seinfeld was engaging readily with LGBT subject matter. But were these contributions for better or worse?

When you talk about Seinfeld’s hand in the sphere of sexual politics, you’re drawn first and foremost to one standout episode: “The Outing,” a 1993 broadcast whose coining of the phrase, “Not that there’s anything wrong with that!” keeps it in the running for the superlative of the series’ most quoted entry. Thought it was hardly commonplace for American sitcoms to touch on gay storylines — and, more specifically, homophobia — Seinfeld cannot exactly be credited as the first show to delve into the issue. What distinguished “The Outing” from installments of the isolated LGBT-themed episodes of All in the Family, The Jeffersons, and Cheers, however, was its willingness to condemn a type of homophobia that had all but been swept under the rug.

The episode sees Jerry and George succumb to an incrementally escalating self-conscious panic upon being mistaken for gay by a journalism student penning an article about the comedian’s career. Despite their repetition of the aforesaid maxim (“Not that there’s anything wrong with that!”) in company of any mention of homosexuality, Jerry and George’s intense discomfort with being seen as gay becomes increasingly, regrettably, and hilariously evident.

While predecessors like those mentioned above admonished the sort of intolerance that those espousing it would cop to — the vitriolic bigotry of Archie Bunker and a bar full of patrons cringing at the alleged decay of their favorite tavern’s reputation thanks to association with a gay baseball player — Seinfeld spotlighted a villain that living dormant but not benign in a self-satisfied society: hypocrisy. Showing off the toxicity (and idiocy) of Jerry and George’s own brand of homophobia, Seinfeld didn’t let its viewers limit their distastes for bigotry to the outwardly hateful; the program revealed that buried, quiet prejudices are just as bad.

Progressive though the show may have been for braving waters that might now seem strange to recall as uncharted, Seinfeld is not exempt from inspection for some potentially backwards ideas. Contemporary views of 1995’s “The Beard,” in which Elaine attempts to “convert” an openly gay man to whom she is attracted, ring instantly questionable. The chief source of consternation meeting the storyline comes with the hurdles LGBTQIA individuals have faced in the two decades since concerning accusations of their orientations being a matter of “choice.” Although Elaine’s desired mate ultimately proves to be “inconvertible,” the simple and rather frivolous entertainment of the question (it is not dealt with with the same conscious fortitude as the subject matter of “The Outing”) does taste sour in the wake of many years fighting against regressive opposition.

Somewhere in between in terms of ideological polish is the 1996 episode “The Wig Master.” The episode introduces Ethan, an openly gay character who is staying in George’s apartment at the behest of George’s fiancée Susan, without context for his sexual orientation — somewhat of a big deal for the era.

Interestingly, the half hour caps with Jerry doing a complete 180 from his ’93 days: he takes issue with a third party jumping to the conclusion that he and Ethan, dining alone together, could not possibly be on a date. Such is a joke that is tough to qualify in consideration of today’s sensitivities; yes, we’re meant to laugh at Jerry’s desire to be thought of as gay, but no, it isn’t exactly homosexuality playing the butt of the joke. We’re meant to laugh, rather, at Jerry’s probing insecurities about not being considered a viable prospective mate. It’s a tossup — the inclusion of Jerry’s suggestion that being discounted as Ethan’s boyfriend is “emasculating” comes with an air of ridicule, but the whole ordeal is indeed more benevolent than anything else 1996 was offering in the way of gay imagery.

While some of Seinfeld’s material on the subject of sexual orientation might not exactly pass muster with today’s progressive mentalities, we can at least recognize the series as an important stepping-stone to reaching said mentalities in the first place — or, at the very least, getting them on television. Vilifying and dissolving “silent” homophobia, reducing the need to qualify the presence of gay characters, and even (frivolous though the execution may have been) proving that homosexuality is as valid and rigid as heterosexuality are all tasks we can credit to Seinfeld. See? It’s not just funny.