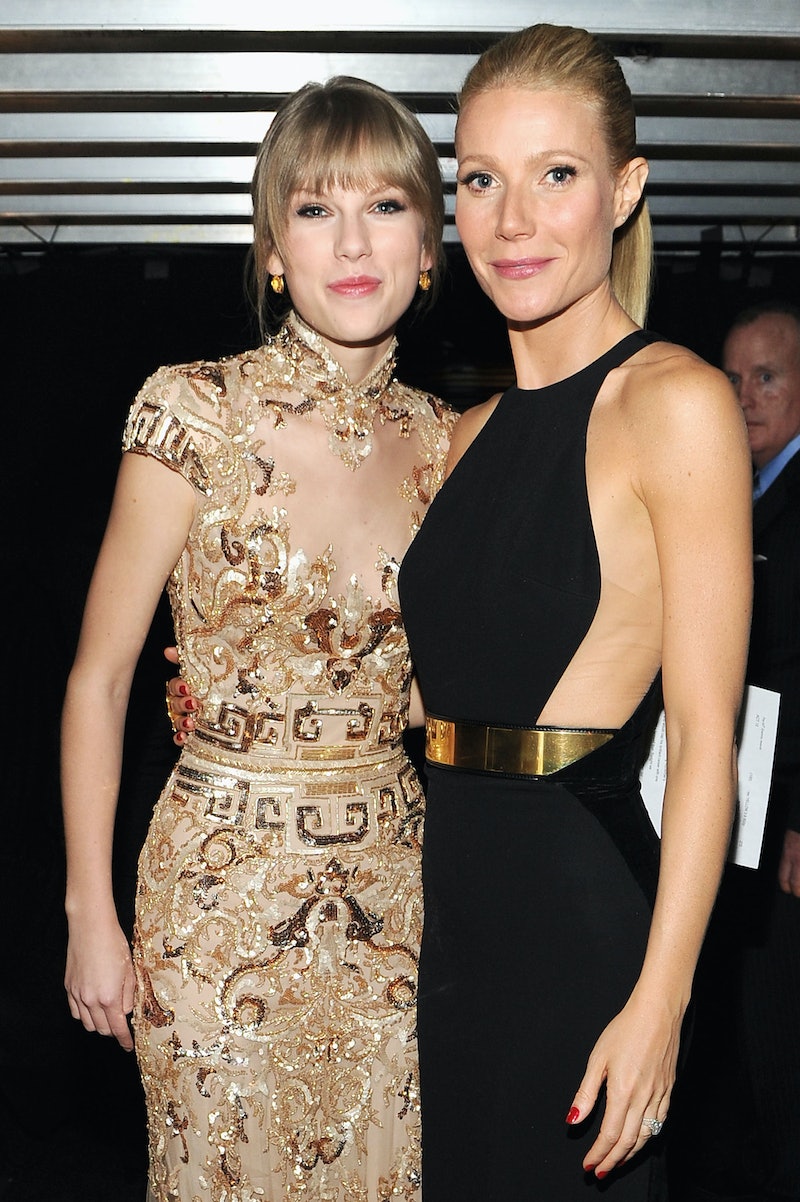 Taylor Swift is obviously a very good friend and possibly the next Mother Teresa — there's no other explanation for how she can possibly maintain close connections with celebs as disparate as Lorde, Emma Watson, Karlie Kloss, Kendall Jenner, and every single Victoria's Secret model on Earth. But the most unlikely friend pairing — the one that she needs in her life — has happened again and I'm totally thrilled for them both: Taylor Swift and Gwyneth Paltrow hung out backstage after Swift's concert in London with Paltrow and ex Chris Martin's 9-year-old son Moses, reports Us Weekly. The actress and mom is 42 and Swift is just 25 — but their ages and different places in life only make them a more ideal duo.

This isn't the first time the two blonde superstars joined forces for the greater good of women everywhere (a grandiose statement, maybe, but I swear I'm going somewhere with this). About five years ago, when Swift was gaga for actor Jake Gyllenhaal, Paltrow threw a dinner party for the couple, according to Us Weekly. Things didn't work out between Swift and Gyllenhaal, but the "Blank Space" singer apparently left an impression on Paltrow.

After Swift's Saturday night concert, Paltrow took to Instagram and posted a photo of the pair along with Moses. How adorable and starstruck does Paltrow look? Poor Moses has half his face chopped off in this photo, but it isn't about him— it's all about Team Swift/Paltrow.

Let's discuss for a moment the importance of Swift shifting her focus from men to her female friends — I'm not suggesting she gave up on the opposite sex at any point, but few can deny that a few years ago she decided oh screw this and put girls' nights out, the planning of bachelorette parties, and the fostering of strong friendships ahead of dating. I'm sure she would have found new boyfriend Calvin Harris regardless, but my guess is that this relationship is going to be her best yet because she has put so much work into other aspects of her social and professional life.

Enter Paltrow. I've always found that women benefit from the advice and energy of other women who are both younger and older than themselves. The Oscar-winning actress has been through a lot and is someone with whom Swift can relate. She married a musician and can dole out advice about maintaining a relationship with these fickle creatures (Harris is a Scottish singer, music producer, and DJ), as well as how to handle breakups with grace — as she and Martin seem to be the only two people on the planet who successfully uncoupled without wishing the other dead. Paltrow is raising two children and managing to keep them protected from the media as much as possible, and Swift will one day need to learn those tricks if she decides to become a mommy. And when it comes to having haters who hate you for reasons they can't explain, Paltrow is familiar with all of that and doesn't give a damn.

Over the years, Swift's own level of DGAF has certainly increased, but you just can't compare a 25-year-old's DGAF with that of a woman in her forties. Paltrow is total DGAF inspiration.

Also, the actress has no hang-ups with age. According to a source who spoke with Us Weekly, Paltrow has expressed her desire to meet Martin's 24-year-old girlfriend Jennifer Lawrence and is confident enough that I believe she would enjoy and benefit from the levity of a twenty-something who can still stay out all night and drink her body weight in vodka without feeling the affects of it the next morning.

Swift will add fun, energy, and youthful inspiration to Paltrow's life, and Paltrow will give back a great deal of solid relationship and life advice and career tips. This is a friendship match made in heaven.