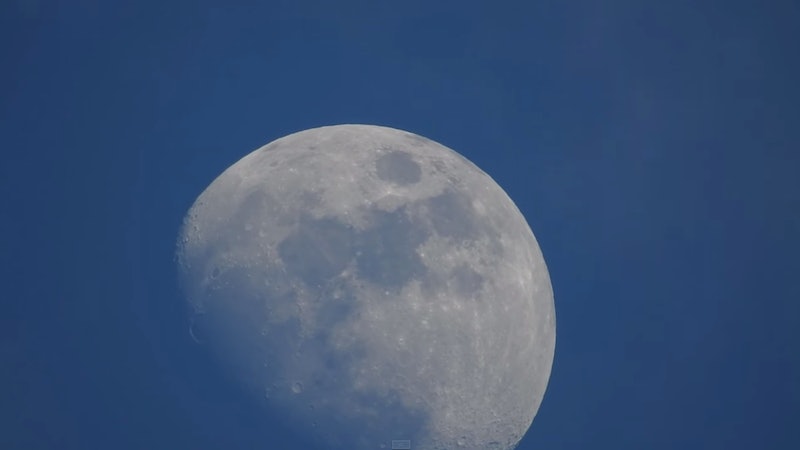 This very cool video shows a camera with an extremely powerful lens zooming in on the moon, closely enough that the moon appears to be moving. Filmed with a Nikon Coolpix P900 with 83x optical zoom, the video begins by showing the moon to be little more than a speck in the distance and then zooms in on it until it fills the entire screen. The moon’s many craters and markings are visible in fascinating detail, and, sadly, it does not appear to be made of cheese. (To get a sense of the power of this lens, consider the fact that the moon, on average, is about 240,000 miles away from the Earth.)

The video shows the moon slowly and steadily shifting across the screen, so it’s tempting to think that it’s the moon that’s moving. It is, but more relevant is the fact that the Earth is moving; the moon moves across the screen because the camera, tied to our rotating planet, is shifting away from it. The moon does move, of course, as it orbits around the Earth; a full orbit takes about 28 days. The Earth, in contrast, moves quite quickly, spinning all the way around in a single day. (And then it’s also orbiting the sun, and then our whole solar system is orbiting the center of the Milky Way…All these spinning, moving parts are giving me a headache.)

I actually think that the coolest part of this video is not the movement of moon (although that is fun, too), but, rather, the vertigo-inducing zoom-in and zoom-out of the camera lens. Watching this GIF alone is making me feel like I’m about to enter another dimension in time and space:

Watch the whole video below. It'll immediately have you wishing for a telescope:

More like this
What Is “Night Luxe?” Breaking Down TikTok’s New Aesthetic
By Courtney Young
Here’s What Sarah Jessica Parker’s Canned Cosmo *Actually* Tastes Like
By Emma Garza
TikTok Is Using A ‘Love Island’ Sound To Expose Their Weird Crushes
By Courtney Young
The Viral TikTok “30,000” Sound Fits Nearly Every Scenario
By Courtney Young
Get Even More From Bustle — Sign Up For The Newsletter