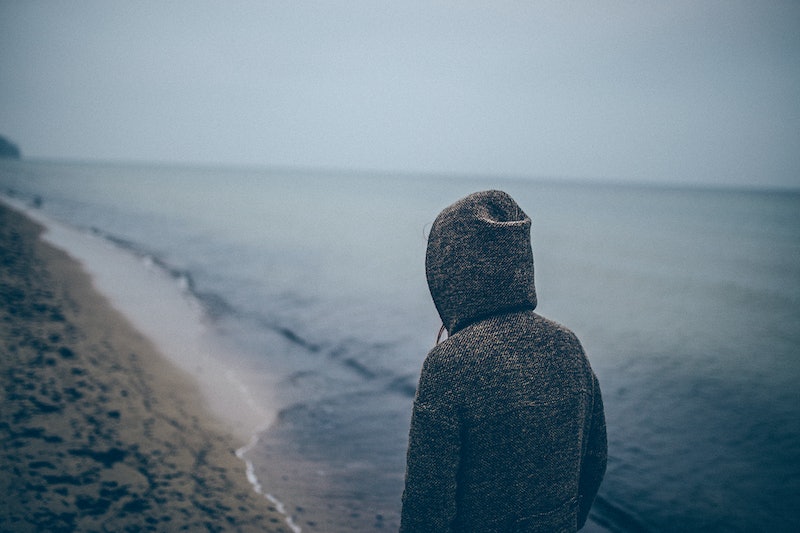 Early last year, I realized there was something different about my lady flower. I found out that she was packing an extra petal or two, if you get my drift. Do you get my drift? You probably don't, because nobody seems to talk about this, so I'll just come out and say it: I have a huge clitoral hood. I mean, maybe "huge" is overselling it. Could it block out the sun, reducing the earth to a new ice age where only the valiant mole rat survives? Probably not. But is it big enough to cover every single millimeter of my clitoris? Best believe it.

How does one take 32 years to realize that their clitoris is hidden under a flap of skin? Hey, I'm busy! I have bills to pay, deadlines to meet, and I've still never even watched The Wire — how am I supposed to fit gazing at my Country Music Hall of Fame with a hand mirror into that schedule? But last year, after my annual failed attempt to enjoy receiving oral sex, I started to wonder. Considering the intensive amount of clit-pressure I generally needed to get off, I always assumed that I was simply not wired for enjoying oral. But one day, I decided to inspect the machinery, out of sheer curiosity.

I prepared to really examine my clit ... only to find that I could not find my clit. I could feel it. But I realized, as I squatted over a mirror that I had purchased specifically for vajournalism research, that I couldn't see my clitoris. I was all boat, no little man. My clitoris was completely covered by my clitoral hood.

I consulted the world's only other living expert on my vagina — my boyfriend of five years — who confirmed my research. "It's, uh ... I know it's there," he said. "But I'm not sure I've ever really seen it." My brain started to furiously try to make sense of this new information. Was this why I'd never liked oral sex? And why I required heavy industrial machinery in order to have an orgasm? I decided to investigate.

What Is A Hooded Clitoris?

I had never heard of anything like this before, but after some Googling, I found that the Internet referred to clits like mine as a "hooded clitoris" — a term that's a bit of a misnomer, because all clitorises have hoods of varying size (people also sometimes refer to it as an "embedded clit"). But that's almost all I found out — there wasn't much clear or substantive information easily available about what a heavily hooded clitoris might look like, or how women who had one might experience sex.

I did, however, find loads of women who seemed terrified by their clit's unusual look. "I don't appear to have a clitoris," one woman wrote in to sex expert Betty Dodson, desperately seeking advice. Another heavily hooded woman wrote in to the sexual advice website Scarleteen, "A friend told me I could have a hooded clit and that I would have to have surgery to get it fixed. What is a hooded clit and can it be fixed?"

I consulted with Bustle's sexual health writer and activist Emma Kaywin, who told me that the clitoral hood is "the anatomical equivalent of the male foreskin" and that "the size and shape of the clitoral hood varies widely, from barely covering the clitoral glans to mom-arming the whole damned thing." Kaywin directed me to this (NSFW) chart of different clitoral hoods, which shows the many different kinds of hoods out there, and confirmed to me that "this variety is totally normal!"

So there's no "typical" look for a large clitoral hood, but if you can feel your clitoris, but can't really see it, odds are decent that you have a "hooded" or embedded clitoris — little-seen, rarely understood, the Bigfoot of the vulva. Which is kinda cool. But does it negatively impact our ability to get off?

Does It Affect Your Sex Life?

I, like many of the women I came across in my Googling, was primarily concerned with my hood insofar as it seemed to be impacting my sex life — I was eager to blame every sexual issue I had ever experienced on my poor hood. It's not my fault that bringing me to orgasm takes roughly the same amount of time and effort required to build an IKEA bookcase! It's that damned piece of skin's fault.

However, this theory started to fall apart when I reached out to Vanessa Marin, a licensed sex psychotherapist who writes Bustle's sex advice column. Marin told me that, "in general, women with heavy hoods are more sensitive ... If you retract the hood, the clitoris tends to be more sensitive since it has been covered up all day and not exposed to the rubbing that many non- or minimally-hooded clits are."

When I asked Marin about whether women with heavy hoods needed extra stimulation when the hood was not retracted, she told me, "If you're stimulating your clit through the hood, you'll likely need more forceful stimulation since there are more tissues between your clit and your fingers/tongue." Kaywin also noted that "the hood not only protects from stimulation, it also can be used to stimulate."

Can A Large Clitoral Hood Be "Fixed"?

Knowing all this, I was even more struck by the fact that most of the women I had found on the Internet discussing their large hoods were asking how to change them, rather than how to work with or around them.

A 2014 article by Sarah B. Rodriguez in Pacific Standard documented the strange corner of the cosmetic surgery industry devoted to performing surgery to minimize clitoral hoods. Rodriguez reports that the surgery — which is intended to "enhance" the female's sexual response — may be familiar to us under a different name: female circumcision, or female genital mutilation (FGM).

Kaywin elaborated, telling me that "some people get their hoods removed in a surgical procedure called clitoral unhooding or hoodectomy." Despite how the surgery may now be presented as empowering, "historically [it was] not completely about female pleasure," says Kaywin. Rather, throughout the 20th century, it was intended to help women orgasm while with partners, because failing to do so was seen as a flaw and a source of stress in marriages.

Kaywin explained that "while these surgeries are still being done on willing bodies in the United States and worldwide, many feminist organizations decry clitoral unhooding as just another invasive way to medicalize female bodies instead of celebrating their natural diversity. Further, many healthcare organizations have gone on record that there’s no solid evidence that this procedure actually increases sexual enjoyment, nor is there indication that it’s a safe procedure, and that there’s therefore no medical reason for it."

Marin told me, "Women have been brainwashed into believing that every single part of their bodies — including something as minor as the clitoral hood — needs to look a certain way, so some women with larger clitoral hoods feel self-conscious about the way they look. There's absolutely nothing 'wrong,' 'weird,' or 'ugly' about having a larger clitoral hood."

And though unhooding procedures are often painted as increasing a woman's ability to climax from heterosexual intercourse, studies have proven that it's the distance between the vaginal opening and the clitoris, not the amount of clitoris exposed, that most directly correlates with a woman's ability to orgasm during intercourse.

Are There Orgasm Hacks For Women With Large Clit Hoods?

Before I talked to Marin, it had never occurred to me that I could lift my clitoral hood (even though that's basically, like, the definition of a hood). So I went home and asked my boyfriend to help me lift the lid on my love machine (the scientific terminology).

Lifting my hood was, we soon found out, a two-person operation — having never been pulled up in 33 years, my hood was not especially eager to cooperate. It required one of us to pull apart my labia minora and the other to pull up the hood itself, while I spread like I was at the gyno, which was exactly as sexy as it sounds. Once we got it up, I asked my boyfriend to touch my now-bared clitoris — and I immediately exploded into uncomfortable giggles. It felt weird. My clit felt overexposed. Having my hoodless clit touched felt less like being completely sexually ravished, and more like being on the receiving end of an uncomfortable tickle.

I had gotten into my own head about my clitoris, assuming that once I got it out, I would find out I'd been missing something amazing; but all I felt was a body part, like any other. Sure, I might find that I liked being touched there after messing around with it. But all the answers weren't under there.

There's no cut-and-dried answer about how to live your best sex life with a large clitoral hood. Some women might find pulling back their hood helpful, while others might prefer to keep it down and use a little extra stimulation. Others might prefer a combination of the two techniques, or completely different methods that haven't even occurred to most sex experts. The best options will vary from person to person, just like their hoods.

But what is clear is that we all need more information about this out there. So many of the women asking for help on the Internet seemed to think they were deformed — because who ever heard of a sexual issue not comprehensively examined on the Internet? But there's nothing weird or bad about a big clitoral hood. If only our search results could reveal that as easily as they reveal how worried women are about them.