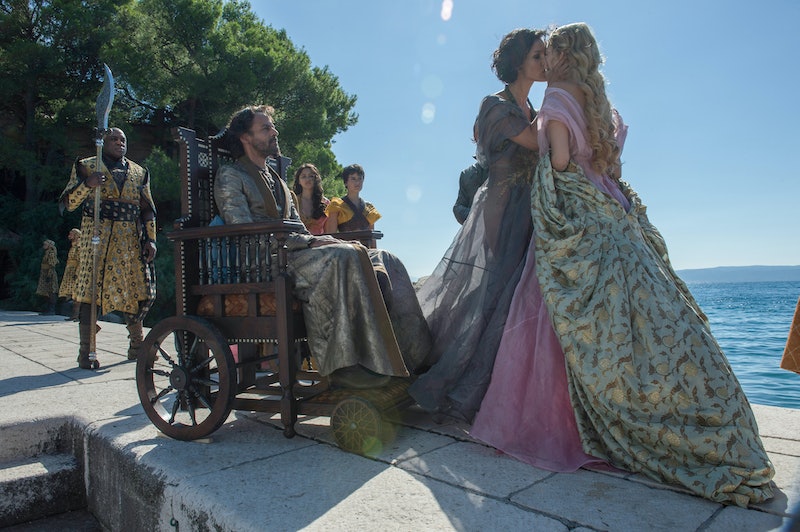 I won't pretend that I wasn't looking forward to Cersei Lannister's inevitable fall from grace on Game of Thrones . The golden-headed queen has always been the epitome of the worst. Her children were fathered by her twin brother; she played a hand in her husband's murder; and she tried to execute her brother Tyrion even though she knew he was innocent. Still, nothing could have prepared me for the horror that I felt while witnessing Cersei's walk of shame. No one, no matter how horrific (well maybe Meryn Trant) should have to be so violated, degraded, and exposed. Nonetheless, Cersei persevered as I knew she would. When The Mountain (who apparently has been resurrected from the dead) lifted her up in his arms during the season finale, it's quite clear that Cersei hasn't been defeated. This means she will be out for blood during on Game of Thrones and a Season 6 casting call in Spain confirms it, thanks to the blog WatchersOnTheWall.

Though Cersei still has her trial and The High Sparrow to contend with, she's also going to have to deal with the death of another one of her children. Fearing for her daughter's life, Cersei sent her twin brother Jamie to get Myrcella from the city of Dorne, where she was betrothed to Prince Trystane. However the bitter and jealous Ellaria Sand poisoned Myrcella before she could arrive home safely. Though we don't have an official acknowledgement of death yet (other than her looking pretty limp and dead in her father's arms), it looks like poor Myrcella has met a tragic end. Myrcella's death doesn't bode well for either Ellaria or the citizens of Dorne. More than anything, Cersei loves her children deeply. She tried to have her own brother Tyrion executed when her monstrous son Joffrey was murdered even thought she knew Tyrion was innocent. Though Tyrion was able to escape, I doubt the citizens of Dorne will fair as well.

The WatchersOnTheWall writes that Game of Thrones is gearing up to begin filming its sixth season in Girona, Spain. Though the extras casting notice obtained by the fansite doesn't reveal much, we know that GoT is seeking Girona citizens from 18-65 years old with "natural" hair color and looks. It certainly seems that the series will be setting up shop to represent the country of Dorne, and that means will be seeing a whole lot more of the warm city next season. Though Prince Doran Martell threatened Ellaria Sand against harming Myrcella, the woman still avenged her lover Oberyn's death by giving Myrcella the kiss of death. So what does this mean for Cersei and the citizens of Dorne? Surely it means war and deadly vengeance.

Here are six things that could happen if Myrcella is really dead, all supported by more Game of Thrones filming in Spain:

1. The Lannisters Will Declare War on Dorne

The relationship between the Lannisters and the Martells has always been precarious. The Lannisters were responsible for the death of Elia Martell and her Targaryen children during King Robert's Rebellion. After Doran's brother Oberyn was murdered in combat defending Tyrion Lannister, there was certainly no love lost between the two powerful houses. Though Doran tried to keep the peace, Myrcella's death surely means war. In order to appease Cersei, Jamie Lannister would absolutely round up Lannister soldiers and the King's soldiers in preparation for an attack on Dorne. This war could be beyond bloody.

Cersei clearly has no problem ordering executions. Though Prince Trystane had nothing to do with her daughter's death, his presence at King's Landing will probably set Cersei off. After all, Myrcella had nothing to do with the cause she died for. Unless Jamie and Bronn take pity on the poor prince, his death is imminent.

3. The Dornish Way Of Life Could Be Over

The cool thing about Dorne is the fact they they are a lot less traditional then other parts of the Seven Kingdoms. They Dornish people have a much more relaxed view on sex and sexuality and they seem to be much more proactive about women's rights. If they are conquered by the Lannisters, this more progressive way of thinking could be long lost.

Prince Doran Martell seems to be a calm man on most accounts. However, when Ellaria attempts to assassinate Myrcella the first time, Doran warns her that the repercussions would be deadly for her. Though Doran has trouble walking because of gout, it's obvious that he's not weak man. Ellaria's actions will cause Dorne some great hardship and I have no desire to see what an angry Doran looks like. However, I may not have a choice.

5. Trystane Could Turn Against Dorne

Though they are very young, Trystane and Myrcella seemed to care deeply for one another. Myrcella's death could cause Trystane to turn against his family and country. Someone with that much insider knowledge about the Martells and Dorne could be a huge asset to the Lannisters.

Ellaria and her daughters the Sand Snakes certainly have a lot more power then people would like to give them credit for. They might be small in number, but they are cunning and deadly. Ellaria poisoning Myrcella may only be the tip of the iceberg. It's possible that Doran Martell may have a lot more than the Lannisters to worry about if Ellaria and her daughters revolt against the Martell house.

Either way, Game of Thrones filming in Spain means one thing: A whole lotta intrigue and danger in Season 6.