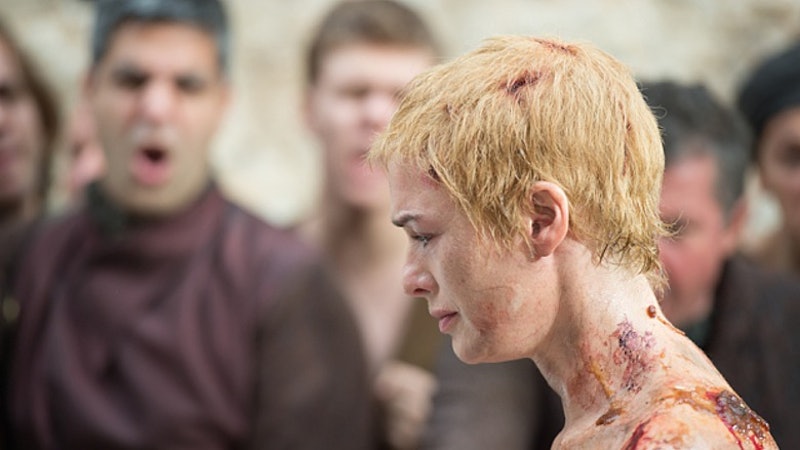 I know we've all been pretty caught up with the whole "Jon Snow is dead — or is he?" situation after watching the Game of Thrones Season 5 finale. I'm not saying that's not a big deal, of course; he was a major player in Westeros and his presence will be missed by many. But I'm here to talk about something I consider to be a much bigger issue than yet another character being killed off: Cersei Lannister. After all, her terribly degrading Walk of Shame was far from the end of her inevitably downfall, and I'm a bit nervous about what's going to befall the former queen come Season 6.

The last we saw her, Cersei had finally arrived back at the Red Keep after being marched naked through the town. But while it might seem to many as though she's experienced punishment enough for her "crimes" (at least the ones the High Sparrow is actually aware of), it's not over. Cersei will still have to face trial for the charges which she has denied, and it's unclear what fate could befall her if she's found guilty — and given the High Septon's rise to power in King's Landing and their rather unkind view of immoral behavior, it seems likely that she will be.

Admittedly, I haven't read any of George R.R. Martin's books, but I have read that we're now past the point of where the books have left off, meaning pretty much anything can happen on the HBO series. It's a scary prospect, especially since the showrunners seem to get off on torturing pretty much everyone on the show in various ways. And I'm not saying that Cersei doesn't deserve a little comeuppance, in many ways. She has been cruel, vindictive and unrepentant in her ways over the years, and all villains are eventually defeated. But how far Game Of Thrones decides to take that downfall is a whole other issue.

Cersei has no real power to speak of. While her son Tommen may be king, it's unclear if that will be the case for much longer, given that he's inexperienced, ill-equipped for the job, and someone's bound to blab at one point or another about the fact that Tommen isn't even Robert Baratheon's actual son. Tommen also just so happens to be quite devoted to Margaery — who, for the time being, is still locked up awaiting trial, thanks to Cersei — and is likely to favor her over his own mother. Cersei has gone from being a major shot caller in King's Landing to the lowest of the low, and that lack of power alone is likely the greatest punishment she could face.

That doesn't even take into account the fact that the one thing that matters to Cersei — her children — are sort of being taken from her one by one. Joffrey had to go, of course, but despite the fact that he was a tyrant, he was still her child. Tommen was taken from her by his love for Margaery, and now Myrcella has been killed to pay for sins that weren't even hers. Not only is Cersei powerless, she's also childless with not an ally left in sight. I'm sure many would argue that she's brought it on herself, but there's a limitation to vengeance, and I feel like Cersei has paid her dues.

What will happen next for Cersei is anyone's guess, and a rise to power again is unlikely. But the Lannisters are nothing if not resourceful, and Cersei isn't one to give up. We've got a long wait ahead of us, but I'm holding out hope for a bit of Mother's Mercy.