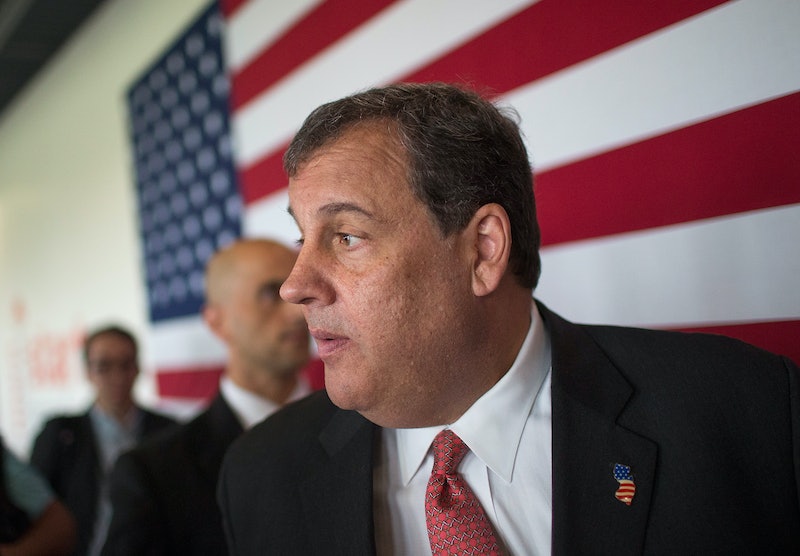 In a somewhat unusual choice, Chris Christie is expected to announce his presidential candidacy at his former high school. The governor will return to his hometown in Livingston, New Jersey, on Tuesday to make his big announcement, according to The New York Times. Maybe Christie has unresolved issues from his pubescent years and needs to feel like a big shot in front of his former classmates. It does make you wonder, though, what the other presidential candidates were like during their high school years.

Clearly, Christie got shoved into a locker too many times, and it's affected his decision-making skills. Livingston High School was a key location in the George Washington Bridge scandal, aka "Bridgegate," in which lanes were closed for political reasons. Christie attended the high school with David Wildstein, the admitted mastermind of the closings. Christie said in a press conference, according to The New York Times, "I was the class president and athlete. I don’t know what David was doing.”

If presidential candidates bring up their time in high school, they might mention such accolades as being class president and athlete. However, high school is an embarrassing time, filled with awkward appearances and gym class mishaps. We know there was a fuller story about the 2016 candidates. Here's what we could find on the people who might be our new president from their high school years.

Clinton was probably that kid who was part of seemingly every activity and was beloved by all her teachers. She was a member of the Student Council Constitutional Committee, directed the student Republican organization, served on the student council, was a "senior leader," was in the Brotherhood Society, co-chaired the Student Council Anti-Vandalism Committee, was vice president of the National Honor Society, acted in a variety show, worked on the school newspaper, was a member of pep club, and was named a National Merit Scholarship finalist, according to Buzzfeed.

The clean-cut Bush boy was actually a bully and pot-smoker in high school, according to The Huffington Post. He must have been frustrated at Phillips Academy, the prestigious prep school where the two Bush presidents also attended. He reportedly used to smoke weed in the woods with a portable speaker. Once, he apparently even sewed the pajama bottoms of a younger boy so he couldn't get into them.

Lincoln Chafee was actually roommates with Bush at the boarding school. According to The New York Times, he said:

One of my dorm mates in 10th grade is running for president also, Jeb Bush. We had some spirited games of Ping-Pong and our paths have not crossed much since high school, but I think we still consider each other friends.

I imagine Chafee as the sidekick to Bush's pajama-sewing ways. He probably just didn't want to get in the Republican's way. If these two make it to debate, maybe it can be in the form of a ping-pong game.

Who would have guessed that Cruz was a drama geek in high school? He even thought about dropping out of school to move to Hollywood, according to NBC News. He mentioned that it's fun to play the bad guy. Is he perhaps hoping to follow Ronald Reagan's footsteps?

Apparently, Bernie Sanders wasn't known for much in high school besides running really fast. At James Madison High School, classmates said he was one of the best half-mile runners in New York City. However, there was one race he couldn't win: student body president, according to The National Journal. That doesn't bode well for Sanders now. The Democrat wrote for the school newspaper, though friends don't remember him having political interest, according to The New York Observer.

It's hard to imagine The Donald as anything but a bad-haired man, but he too was in high school once. Trump had disciplinary problems in public school. The son of a top New York developer, he was sent to military school at 13 in the hope that it would help him channel his energy in a positive way, according to Biography.com. There, he was an athlete and student leader.

Fiorina actually attended five high schools, including one in Ghana, according to Fortune. She was probably always the new kid, never having time to find real friends or interests.

Rubio was reportedly incredibly disruptive at South Miami Senior High School. His teachers offered to give him a C minus if he skipped class and threatened to give him an F if he returned, according to ABC News. He finished with a 2.1 GPA and used to sneak alcohol to the Biltmore Hotel in Coral Gables.

Luckily, high school doesn't define who we become as adults, and in the case of presidential candidates, that's a good thing. Otherwise, no one would ever be qualified enough.