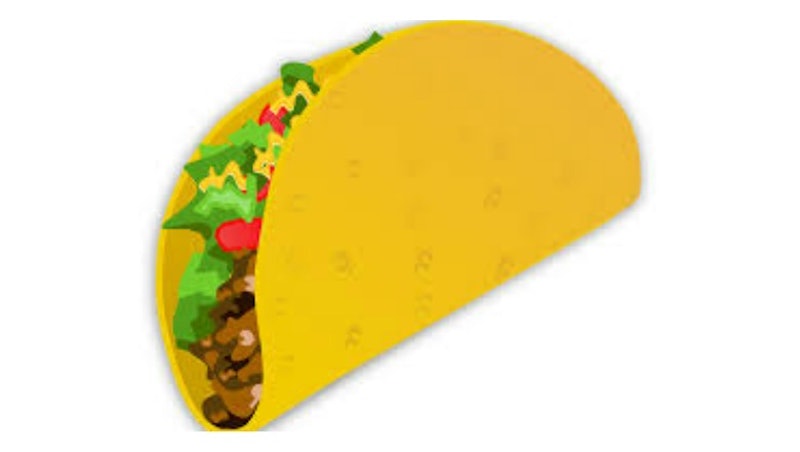 Big news: The taco emoji is finally here! The Unicode Consortium released the latest update to our beloved emoji set today, and I am happy to announce that Unicode 8 includes not just the taco emoji, but also the cheese emoji, the burrito emoji, the hot dog emoji, and much, much more. This is it, guys! The moment we've been waiting for! Even if, y'know, we don't actually have access to them for a while.

According to Emojipedia's blog, the update includes 37 new emoji and five modifiers. The modifiers will look familiar to most us; they're the skin tone variations that Apple already introduced to its iOS emoji earlier this year. In addition to all those fabulous food emoji — all of which fall under the heading of “Most Popularly Requested” — the new options also feature a number of missing sports-related images (cricket, anyone?), a few new faces and hands (“sign of the horns” is officially a thing now), zodiac symbols, and religious symbols. The only one that's missing? The red-headed modifier. Sorry, gingers; looks like you'll have to keep lobbying for that one for a while, especially since the candidates for Unicode 9 have already been confirmed.

One of the pieces of criteria Unicode considers when assessing potential new emoji is the expected usage level. Given the enormous and vocal campaign to make the taco emoji a reality, it's probably fair to say that they expect the usage level to be high — so now that we have it, we'd better darn well use it. Given, however, that emoji can be used to mean much more than what they appear to be on the surface, though, something tells me that won't be a problem. Here are a few ideas; head on over to Emojipedia to see the full list of Unicode 8 emoji.

Pair it with the bell emoji and get, well…

You get the idea.

If Instagram won't allow the eggplant, maybe they'll allow the hot dog instead?

And continuing the euphemism train, I am positive that this one will not be used to indicate a celebration.

I'm so Face with Thermometer of you!

The possibilities for this one are endless: That's so Cheese Wedge-y... say Cheese Wedge… I can't wait!

Pair it with a cat face and…