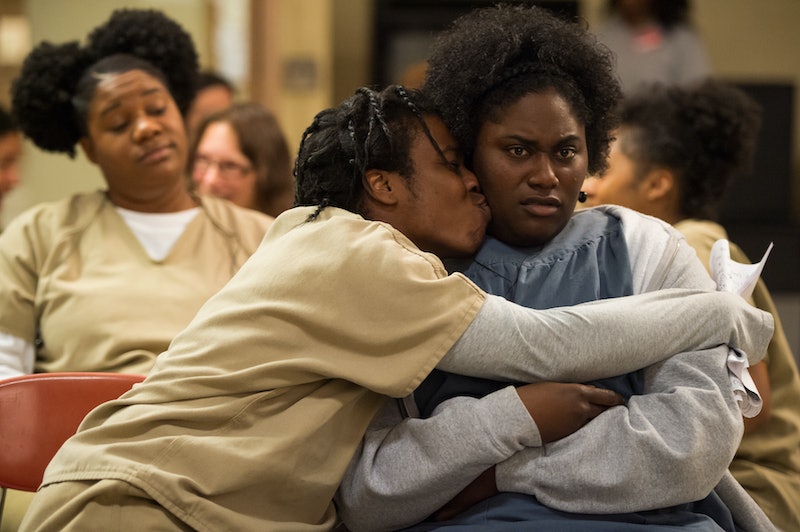 Danielle Brooks, playing Tasha “Taystee” Jefferson, is among the most joyous reasons to watch Orange is the New Black. She brings such a light to the character of Taystee that I find myself obsessed with every bit of her backstory, especially one specific detail: Why is Taystee in jail on OITNB, anyway? Due to evil drug lord Vee’s inclusion at Litchfield in Season 2, there was a whole lot of Taystee to go around last year.

Here’s what we know about Taystee so far: Growing up as an orphan, Taystee was adopted from her orphanage by Vee, who seemed really nice but then turned out to be some sort of drug mastermind. Too bad that Vee was so charming and nurturing, because Vee preyed on Taystee, using her need for love as a means to brainwash her into doing whatever Vee wanted — including being the “accountant” for Vee’s drug ring. This is probably what did Taystee in and sent her to Litchfield, but, since we haven’t seen her actual moment of arrest, it’s just a good guess. Taystee was given the chance to leave jail, but got sent back on purpose in Season 1, saying that it was just too hard to live on the outside. She’s essentially been institutionalized her whole life, and Taystee doesn’t know how to function in normal society.

Unlike most of her Litchfield peers, Taystee is very well-read (she does work in the Litchfield library) and highly ambitious, and she also likes nature shows and pretending to be “Amanda and MacKenzie” with her best friend Poussey (where did that bit go? I miss it). Oh, and she also loves Harry Potter. Taystee’s personality totally seems like someone I would want to hang out with (minus the heroin ring part), and so I have many ideas about where else Taystee’s storyline could go.

Taystee Gets A Real Job

Taystee’s obvious disappointment over the job fair being a fake circus for the inmates was palpable — Taystee really prepared for it, and she ended up humiliated. I’d like to see Taystee get a better job than library duty in the prison. She used to be an accountant, so maybe Litchfield would do some sort of administrative assistant job for some of the ladies? It’s a long shot, but Taystee has such ambition that I will dream for her.

Taystee pretty much only hangs out with the black members of the prison — Poussey, Crazy Eyes, and Black Cindy — but what if she was forced to shake things up a bit? Taystee is a laugh a minute, and, now that she is a mother figure for her tribe, it would really throw things into an interesting disarray should she decide to leave.

Taystee Gets Out Of Jail

One of the most interesting parts about Orange is the New Black is that there are consequences to every move that each character makes. I know that Taystee has already been released from jail and had to come back because she felt like she couldn’t crack it on the outside, but what if she was able to get a support system and get out of jail? She and Poussey could get out together, and take their two-woman show on the road. I smell a spin-off, don’t you?

Taystee is one of the show’s most thoughtful and intriguing characters, and I can’t wait until Season 4 of Orange is the New Black to find out what happens to her next.

More like this
Simon Bird’s New Show Is *Very* Different From 'The Inbetweeners'
By Nola Ojomu
'Gentleman Jack’s Cast & Crew Are Keen On Season 3, Too
By Frances Stewart
Kenneth Branagh Looks & Sounds *Exactly* Like Boris Johnson In 'This England'
By L'Oréal Blackett and Rachel Mantock
Billie Piper Just Confirmed 'I Hate Suzie’s Festive Return
By Kayla Blanton and Shahed Ezaydi
Get Even More From Bustle — Sign Up For The Newsletter