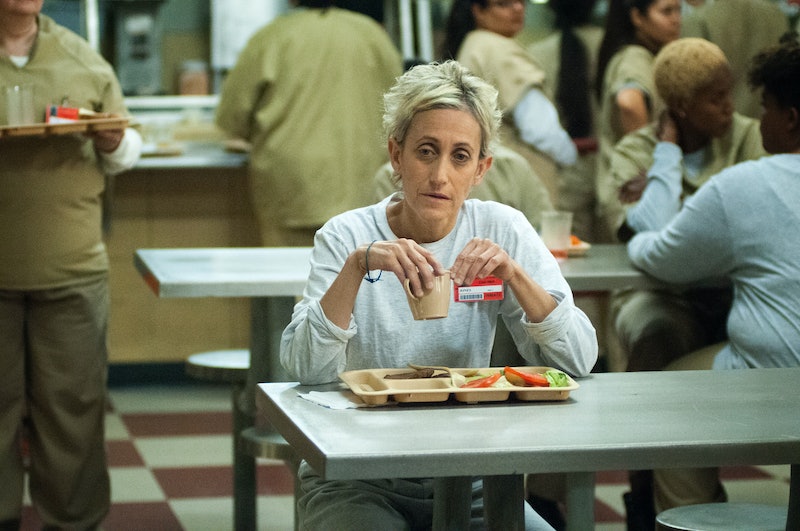 Before I started the new batch of episodes of Orange is the New Black, I had to catch up to see where my favorite ladies of Litchfield were, and why they were in jail. Meditative and non-confrontational (but not afraid to hit a b**ch if needed, just ask Janae), Yoga Jones is probably my favorite character on the show. Constance Shulman (who was the voice of Patti Mayonnaise on Doug, if you didn’t know) plays her with such a serene sort of wisdom that you can’t take your eyes away from her while she’s on screen. In the break between Season 2 and Season 3, I plumb forgot: Why is Yoga Jones in jail on OITNB?

Most of the women in the prison have a sad story to tell, and Yoga Jones is certainly no different. She is in jail because she killed her neighbor’s 8 year old son. Yoga Jones was an alcoholic pot farmer prior to her stint in Litchfield, and she had this pesky problem of the deer always eating her best weed. One day, Yoga Jones saw a rustle in the bushes, and, blind drunk, she shot into the bush. Unfortunately, it was a little boy who had run away from home, and not a deer seeking out a good high. Yoga Jones is very remorseful over her crime, and I think that this has added to her ideas of karmic retribution and dharma.

All of this being said, we don’t know a whole lot about Yoga Jones yet. We viewers have yet to hear much of her background, so I’ve imagined some of her life for myself. Here are some things that would be interesting to see from Yoga Jones in the next season of Orange is the New Black.

Yoga Jones Meets With The Boy’s Family In Jail

Obviously, Yoga Jones has proven that she is sad for what she’s done, but I’d like to see the family of the young boy that Yoga Jones killed come to see her in prison. Why? I want to see if their grief changes anything about her. Yoga is so in tune with not only her feelings, but also the feelings of everyone at Litchfield that it’s always interesting to see how she processes the emotions around her. It would be one hell of an acting adventure for Shulman, for sure.

I’m not even talking about the murder that landed her in jail — what events set the scene for Yoga Jones to get put in jail in the first place? Why was she growing marijuana on her plot of land? Why is she an alcoholic? What made her turn to yoga? We’ve gone so deeply into other’s backstories to really know why these characters tick. I’d love to see it from Yoga, too.

What happens if you take Yoga Jones’ main source of calmness away from her? We know that it’s not all sunshine and rainbows in Litchfield, and maybe with the (mild spoiler) changing of the guard at Litchfield, someone will come in and ban Yoga Jones from doing yoga. What happens when you take someone’s essence away from them? Does it dehumanize them? Again, it’s a brilliant acting hurdle to tackle for Shulman.

Do you hear that Jenji Kohan? We the people want more Yoga Jones, and we want it now!

More like this
Justin Timberlake’s ‘Candy’ Character Really Investigated Betty Gore’s Killing
By Brad Witter
Kaley Cuoco & Tom Pelphrey Just Made Their First Public Appearance As A Couple
By Hugh McIntyre
Pete Davidson & Kate McKinnon Are Part Of A Reported Major SNL Cast Shakeup
By Brad Witter
Colin Firth Revealed His Favourite Mr. Darcy (& No, It's Not Himself)
By Sophie McEvoy
Get Even More From Bustle — Sign Up For The Newsletter