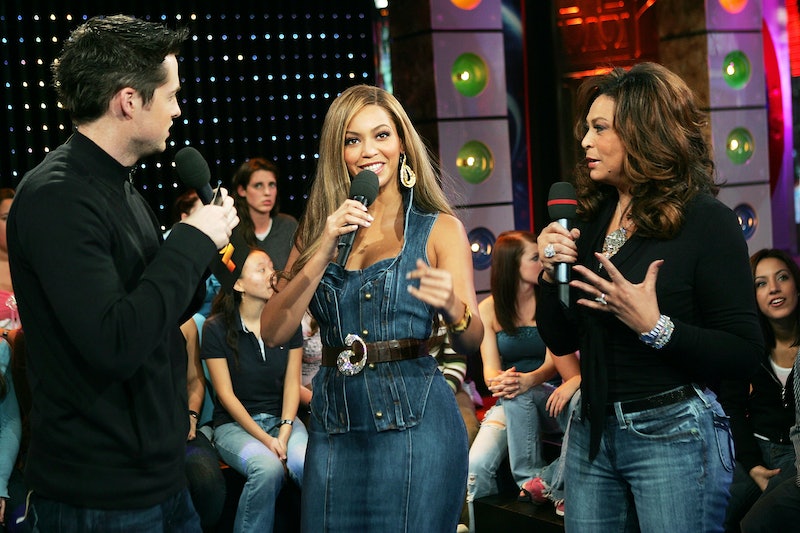 If Beyoncé is the queen of all things (and she is!), then logically there's only one person who can come close to her royal beeness: she who gave birth to the queen. Together Beyoncé and Tina Knowles make one smokin' mother-daughter duo. After all, Yoncé must get her trendy ways from her fab mama, right? I'm picturing young, Blue Ivy-esque Bey now, tearing through her mom's closet, trying on the tallest heels and the sparkliest tops. If I were Bey, I'd be tearing pages out of this 61-year-old goddess' style book too. I mean, have you seen her mom lately? Let's take a moment to reflect on Tina's Ebony magazine shoot for a sec. Like, hot damn girl! I'm not sure who's hotter, Yoncé or her mother.

Without Tina, there could be no Beyoncé — and you couldn't pay me a trillion dollars to live in a Yoncéless world. It only seems right to thank her for her daughter's fashionista ways (but thank God their wardrobe has transitioned past those early-aughts-chic Destiny's Child costumes). Long before Bey and Tina were giving us life at Solange's ivory wedding, the pair was slaying together. Forget about the current fashion bombs they've dropped on us lately and join me in a trip down memory lane. The queen and the queen Beyhiver (I was a close second of course!) were practically twinning at times. These eight old photos that show Bey and Tina were — and always will be — one stylish duo!

Rewind back to 2011 and you'll catch a younger Bey and Tina strutting together down a House of Deréon runway. The pair looked more like sisters as they dazzled the stage in all-black getups. We always expect a little glitz and glam from the queen and she didn't disappoint. Tina shows us how it's done too, looking as bomb as ever in black denim and a cropped moto jacket.

Just a year before slaying a Deréon runway, the duo opened the Beyoncé Cosmotology Center in their usual fashion: Yoncé in glitz and Tina keeping it simply chic. They looked beyond flawless, once again. The silver of Bey's one shoulder dress sparkled against her honey skin (she also had the silver pumps to match!). Tina let Bey have her moment, toning it down in black with a long-sleeved silhouette, cinched at the waist with an oversized belt. They may not have coordinated their looks this time, but there's no denying how great they both look.

The mother-daughter duo is pictured here at Bey's Cadillac Records New York premiere. Bey keeps it ultra sexy in a slimming floor-length gown, complete with a lace overlay and sequin detailing. But don't be so quick to think Beyoncé is the only one who gets a little sparkle. Tina may be all business on the bottom in this grey mid-calf dress, but there's a small party at the top with her beaded collar.

Keeping things sleek and chic, Tina and Bey broke out the black ensembles in 2008 too. Beyoncé kills it in this velvet and satin Dolce & Gabana puffed sleeve dress — and you know she couldn't leave the bling behind so the embellished belt was a must! Tina compliments her with an elegant long-sleeved gown. That deep v-cut neckline is something serious though! Notice how Tina always looks as good as Yoncé, but never overshadows the queen. Two snaps to you mama bear! I'm also digging how they traded in their oodles and oodles of curls for sleek, bone straight hairstyles too.

Tina and Bey caught our attention once again in 2008 with these simple, yet beautiful, numbers. Very into the matching, off-the-shoulder action. Bey is as fierce as ever with an a-line neckline for her look and Tina gives just the right amount of sass with one off shoulder sleeve. What I'm loving most, though, are the shoes on this stylish pair! Jewel accents for Bey of course and cutouts for Tina.

2008 was a great one for the Knowles family. I can't get over how adorable the Knowles women look pictured together. I just love seeing Bey with her baby sis! Birthday girl Solange may be the one to stand out here in that bright tangerine dress, but we can't ignore just how much Tina and Beyoncé are twinning in this moment. I'm just going to assume the two had a mother-daughter shopping date (minus Solange, who had her own birthday dress shopping to do) and picked out some matching black wrap dresses. This may be on the more conservative side of the spectrum for what we're used to seeing from Tina and Bey lately, but no doubt they still look as fab as ever.

Yoncé and her hot mama were more stylish than ever a decade ago! The denim on denim trend may have recently resurfaced but Queen Bey was all about it in 2005. Of course mama Tina had to follow her lead and wear a little denim of her own. While Bey worked that matching denim top and skirt, Tina let her jeweled boots do the talking.

That tea length dress looks amazing on Bey, and of course Tina is rocking the heck out of a color-coordinated suit.

Yasssss queens! Gold and black are apparently the Knowles family colors — and for good reason. Both women look fierce in the striking combo.

We've got double neckline trouble here. Between Tina's sheer sleeves and Beyoncé's gold beading, I'm not sure which is more fabulous.

Beyoncé is looking a little more Prom Queen than Queen Bey here, but the color coordinating of Tina's suit to the embroidery of her dress is fantastic. Work those girls, curl!

Is there anything better than this gilded, pirate-esque dress? Only Tina's chainlink belt, of course.

I spy baby Jay-Z! His ensemble is a little casual for front row at Fashion Week, but the Knowles women look as flawless as ever.

As the years have flown by, Beyoncé and Tina have only become bigger trendsetters. What I'm really hoping to see 20 years from now is Bey twinning with princess Blue. If she's anything like her hot mom and sizzling grandma, we'll be seeing three generations of fabulousness pictured together really soon!