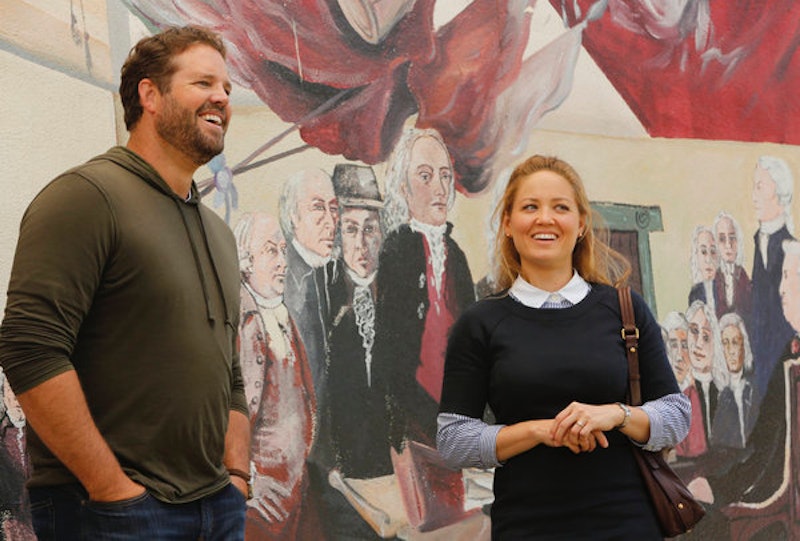 There is a lot going on with the Bravermans right now. This season of Parenthood has seen Kristina running for mayor of Berkeley, Ryan and Amber getting engaged and heading straight for disaster, Crosby getting a screaming daughter and ballet-dancing son, Sarah preparing to date her tenant or Hank again or Mark again, Camille and Zeek figuring out their third act and even Drew's getting some action. There are a ton of stories in motion and none are perfect, but there is nothing more singularly frustrating than watching Julia on the verge of a nervous breakdown.

Most of the Bravermans have had their turn at being the annoying one. There was a time when Kristina was an overprotective mom who refused to compromise and when Crosby cheated on Jasmine with Lyla Garr — I mean, Gabby the behavioral aide. They've all had their moments, but I believe that Julia's is the absolute worst.

She's already set up to look bad for one simple reason — her husband is amazing. Ever since his first appearance on the show, Joel has proven to be the best husband and father anyone could ever dream of. He spent years raising Sydney (which, let's be real, could not have been easy) so that Julia could maintain her career. Before we get into how awful Julia has become, let's look back at Joel, for context.

Remember his reaction to Zeek's affair?

Or when he made sure Julia felt appreciated?

He even did it again this season, since he's been so busy with work.

He can be funny, too!

So Joel is a really great guy, and he's super hot. Of course that wouldn't excuse him from treating her poorly or not considering her feelings — if it ever happens. Because guess what Julia, it hasn't.

When this season started, Julia was unemployed after quitting her job to focus on getting Victor adjusted to their family, which he conveniently needed right after she made a mistake so bad it might've cost her the job anyway. Because of the circumstances surrounding her resignation, Julia couldn't get a good reference from her old boss and as we've seen, it's proven very difficult for her to get a new job.

Joel then made the logical decision of going back to work, because you know, money is a thing that people need. Julia was not okay with it. First she worried that he wouldn't be there to help Victor adjust but again, money. Then he got a huge job for his contracting company and that's when Julia lost it.

She made it quite clear that she isn't happy with Joel working long hours for his new, attractive female boss Pete, even though there doesn't seem to be anything inappropriate going on — and Joel would never do that. Does she have the right to be frustrated that he hasn't been around as much for her and their two children? Absolutely. Does that give her the right to project all of her parents' issues onto her own marriage and potentially have an affair? Of course not.

This is what Julia has been up to.

She befriended Ed, a fellow parent on the sustainability committee at Sydney and Victor's school. The more frustrated she became with Joel for working late, the closer their relationship grew until she was listening to his voicemail on repeat and having a very emotional hug. Things do not bode well for their marriage, and I'm worried for Joel. After all, David Denman, the actor who plays Ed, is no stranger to stealing women from amazing men.

(That would be him making out with Pam right in front of Jim on The Office). Julia spent years being the working parent while Joel stayed home, and as a corporate lawyer, she had some late nights. Now that the roles are reversed, she's villainized Joel to the point that she is coming very, very close to an affair. It's also worth mentioning that Joel is not forcing her to stay home, and Julia has been looking for a job for a while now.

And the frustration doesn't stop there. As this all this was happening in the Graham/Braverman home, Julia's parents were arguing over what to do now that their kids are grown and out of the house. Camille wants to sell their house to travel, since she spent most of her life raising kids and grandkids, while Zeek would rather relax in their home and spend time with the family. Every time Camille complains about her husband not listening to her, Julia identifies with it, and has some kind of freakout about husbands needing to consider their wives feelings.

The thing is, Julia has been home with her kids for less than a year, is aggressively job hunting, and only disagrees with her husband about the fact that he has a job. That isn't quite the same as being married to the most stubborn man in the world for at least forty years, never having the opportunity to pursue a career in the first place and disagreeing about your very future. Julia is not her mother, and the more she plays herself to be the victim, the less I sympathize with her.

The biggest disagreement that Joel and Julia have had, besides the horrific trauma of him working, is whether to hold Victor back in school. Zeek had a long-term affair while married to Camille, secretly made bad investments, and almost lost their house.

There may be a ton of plots up in the air on Parenthood, but this is the one that most desperately needs to be resolved. Julia is heading down a path that could leave her so unlikeable, she'll never win viewers back over. Within the next few episodes, Julia needs to realize that she is not her mother, her husband is not trying to punish her by working, and Ed is not the solution to her problems. Joel may not be one of the core Bravermans, but he deserves to be treated better.