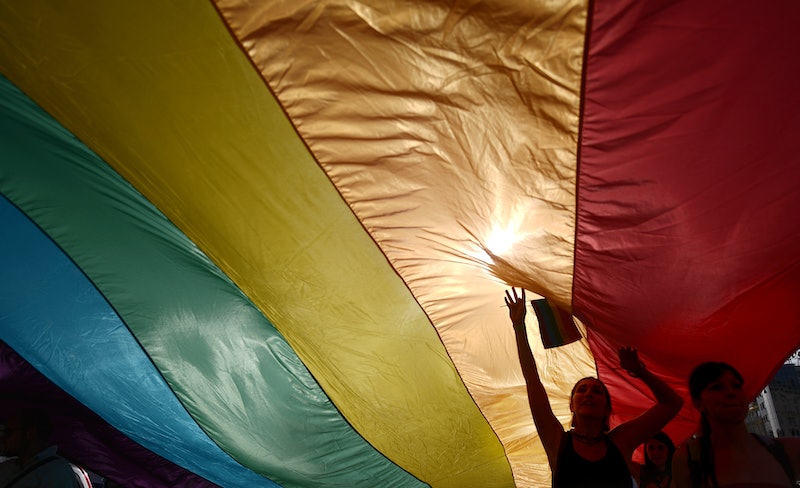 Friday's SCOTUS decision stating that same-sex marriage bans are unconstitutional launched a celebration that continued all weekend long (helped, in part, by the fact that June is Pride Month and last week was Pride Week for a ton of different cities) — and now I've got a fun little way to add to it: The Infinite Text-in-Progress prank, pride edition. Created by Miscellaneous Mischief, who you might remember from the “Toothpick” tip calculator app, it's a delightful little joke to play on the people you love — because what better way to turn the typing awareness indicator into something awesome than by giving it a rainbow makeover?

Miscellaneous Mischief landed themselves on the map when they created their Infinite Text-in-Progress prank back in 2013. Capitalizing on what I will forever refer to as the tyranny of the typing awareness indicator, the prank was simple, yet elegant, consisting of a single GIF — a GIF that, not at all coincidentally, looks exactly like the three little dots on an iPhone that let you know that someone is typing out text message to you.

After the SCOTUS ruling last Friday, Miscellaneous Mischief gave the Infinite Text-in-Progress a rainbow-colored makeover to celebrate, and you guys? I kind of love it. What I appreciate so much about it is that it's not at all mean. It's a brief chuckle, a clever little “gotcha!” moment, geared at marking a momentous occasion with a good-spirited joke on its lips and a sparkle in its eye.

The instructions for using the pride edition of Infinite Text-in-Progress are simple:

1. Save this image to your phone.

Miscellaneous Mischief warns that it “looks a little off when you send it,” but formats itself perfectly once it reaches the person on the other end. So, y'know… consider yourselves warned.

2. Text it to your chosen victim, although be warned: It'll only work if you send it to an iPhone.

I'll admit that I'm not sure what happens if you text it to someone with an Android or a Windows phone, but my guess is that it either won't format correctly or won't mimic the appropriate text awareness indicator. Sorry, non-Apple users.

3. “Laugh. Celebrate. Then do it to someone else.”

My sense is that you'll have everyone asking you how you changed the typing awareness indicator on their phone to reflect the glory of the ROYGBIV rainbow. If you like, you can just smile and send them here.

We do, of course, still have a long, long way to go before true equality is achieved, for all people, everywhere. But while all the celebrating might be criticized for seemingly ignoring all of the other work we have left to do, I still think it serves an important purpose: We spend so much blood, sweat, and tears fighting for things that should already be the law of the land that that when we do finally achieve one of them? We need that celebration. We need it to remind ourselves, especially during the darkest of times, things can change for the better. The riotous join that began on Friday and is still going on today? We'll all remember that. So even when things seem hopeless? We'll have something positive to hang onto.

Even if it's just as simple as a series of rainbow-colored dots.