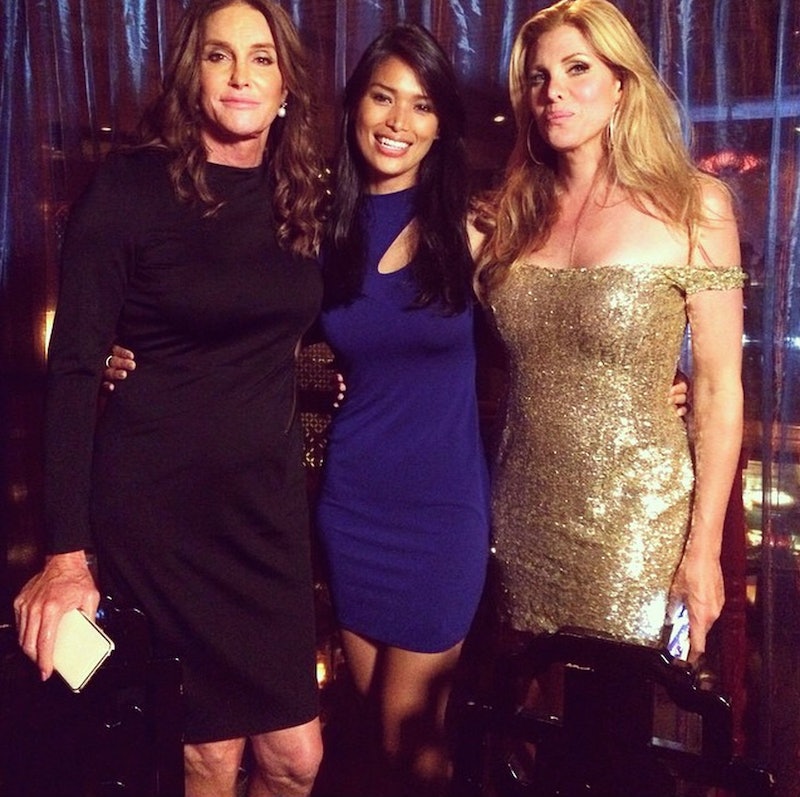 On Sunday, June 28, the residents of New York City gathered to show their pride for LGBT rights and their joy that the Supreme Court decided that state bans on same-sex marriage are unconstitutional by attending the New York City Pride Parade. The uplifting event had a surprising and very welcome guest: Caitlyn Jenner. That's right, Caitlyn Jenner attended NYC's Pride Parade and raised awareness for the transgender community, along with supporting the LGBT community as a whole. It appears that during the I Am Cait star's trip to New York, Jenner met with fellow trans women, where she continued to showcase her pride and prove that trans is beautiful.

On Monday, Jenner shared a gorgeous photo of herself and her friends. She captioned the picture as follows: "Such a fun dinner in NYC w/ this powerful group of trans women. They are all so beautiful. @GeenaRocero @candiscayne." It appears that they gathered for dinner and decided to share the lovely time on social media. For those who don't know, Geena Rocero is another inspiring transgender woman, who made headlines for her powerful 2014 TED talk. As for Candis Cayne, she is a talented actress known for roles on Elementary, Dirty Sexy Money, and To Wong Foo Thanks For Everything, Julie Newmar.

Like Jenner, Cayne and Rocero couldn't have been more thrilled to dine together. Cayne shared a photo of herself and Jenner on Instagram with the caption, "Pride." Rocero did the same thing, but she captioned her photo, "Amazing dinner with fabulous Caitlyn Jenner, Candis Cayne and many power Trans Ladies! #TransPinay #genderproud #girlslikeus#transisbeautiful."

It's women like Jenner, Cayne, Rocero, and the others in the above photo who are making this world a more tolerant and accepting place. There's no doubt that they inspire and continue to prove that trans is truly, and will forever be, beautiful.