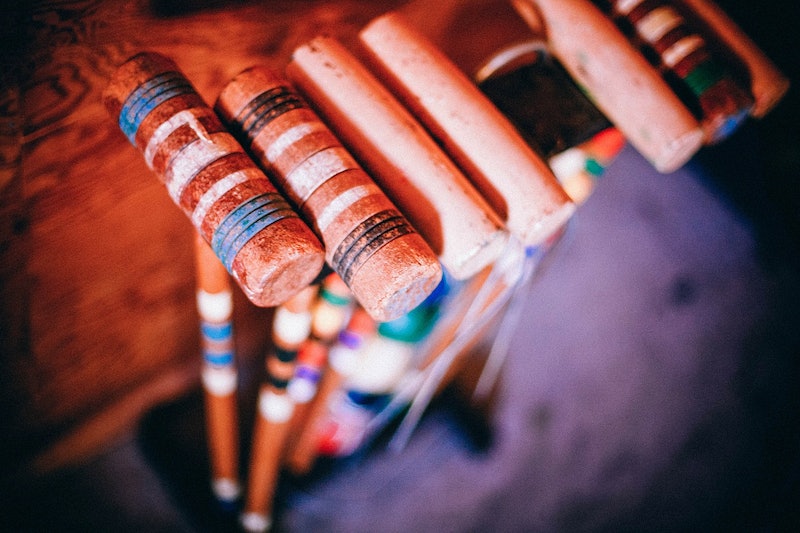 It’s almost Independence Day, so dust off your giant Jenga sets and check to be sure that squirrels didn’t eat your cornhole bags (is that just a Southern thing?), because it’s time to go outside and show off your skills with some Fourth of July lawn and patio games.

A lot of us are introduced to lawn sports as children. Some of my fondest childhood memories come from those special days in elementary school when we would get out of class early to win bragging rights over our classmates. My competitive nature was exposed early on thanks to my school’s annual Field Day. See, I grew up with a bunch of boys (one brother and approximately 734 cousins), and had quite a bit of practice climbing things and really “bringing it” when glory was on the line.

In college, I was reintroduced to many of the same games that were vital parts of the Field Day experience — most of them with beer integrated in some way. Whether you're in it to win it or would just like to add a good-spirited competition and camaraderie to your Fourth of July party, these patio games are sure to keep the fun rolling like a bocce ball all day.

Grab your favorite American brew, and get ready to win gold!

The history of cornhole, less colorfully known as "bean bag toss," is foggy at best. It is suggested that this game was created in 14th century Germany, and pretty much every Southern state in the USA claims to have reintroduced it in its current form. Scoring is simple — players stand behind their platform and toss the bag-o-corn at the opponents' platform. A bag in the hole scores three points, a bag on the platform scores one, and this continues to 21 points. Decorate your cornhole platforms in the colors of your favorite sports teams, or with the American flag for the Fourth.

Don't flinch, this game of steady hands and physics strategy just keeps getting bigger. You might not know that Jenga was actually invented by a woman. Get a three-foot-tall set by tomorrow with Amazon Prime, or go nuts and build your own.

You've heard the expression "close only counts in horse shoes and hand grenades." This expression is born from the surprisingly confusing and infinitely varied horse shoe scoring system. It seems that everyone who plays horse shoes scores it a little bit differently, but for simplicity's sake, let's say that it works like this:

Each player tosses two horse shoes at the opponent's stake. If your shoe is six inches or closer to the stake, that scores two points. A shoe encircling the stake, called "a ringer," scores three points. Further away than six inches gets you no points. Games are played to 21 points, but a player must win by two or more, so horse shoes can go into overtime if the score is tied or within one when a player reaches 21 points.

Ring toss is obviously another tossing game, but it's way simpler to score than horse shoes. To build your own ring toss set, you'll need a number of glass bottles and a rack for them to sit in. Milk crates and pallets are cheap and readily available options for your ring toss rack. Make your own rings with jute rope cut and glued together with hot glue and a ribbon. Whomever rings the most bottles wins. It's simple... even after you've "emptied" all of those beer bottles to build the game.

Croquet really shows its age by the sheer volume of scoring methods and house rules that exist. Check out the official rulebook for American six-wicket croquet, or make up your own rules, because, hey, that's what people have been doing for the past 150 years anyway. They don't call it Independence Day for nothing. There is even a variation called "beer croquet," which was invented in Central Florida (of course).

It is said that bocce was invented in Ancient Egypt and was a precursor to modern bowling. One team is selected (by coin toss, drawing straws, or by good manners) to throw out a small ball called the jack for the first frame. Then, teams alternate turns tossing colored balls to try to get closest to the jack. The team with the ball closest to the jack at the end of play (this is important to note, as teams can conspire to sabotage each other by hitting already-played bocce balls) scores one point or two if their ball is touching the jack. Games are played to 15 or 21 points.

Harry Potter fans will recognize most of the rules of this earthbound adaptation of the favorite sport of the wizarding world. You don't need to be at Hogwarts to experience the magic here — just read up on the rules, and get ready to have a seriously good time on the pitch.

More like this
11 Super Bowl Instagram Captions To Use On Game Day — Even If You Don’t Like Sports
By Alexis Morillo
The 2023 Super Bowl Commercials Feature A 'Breaking Bad' Reunion & Missy Elliott
By Alyssa Lapid
Flip Phones Are Gen Z's Favorite New Nightlife Accessory
By Maria Santa Poggi
Andie From 'How To Lose A Guy In 10 Days' Is A Total Gemini
By Nina Kahn
Get Even More From Bustle — Sign Up For The Newsletter
From hair trends to relationship advice, our daily newsletter has everything you need to sound like a person who’s on TikTok, even if you aren’t.