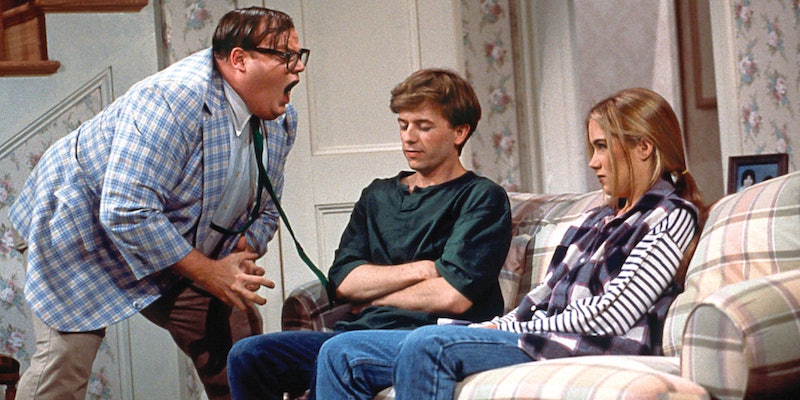 It's been nearly 18 years since Chris Farley passed away, and the world of comedy can still feel his influence. The gifted actor was only 33 when he died, and it was tragically due to an overdose of cocaine and morphine. Farley's story was sadly not an unfamiliar one: A young talent, whose star rose too quickly, falls into the hard and fast life of Hollywood and loses all control. The upcoming documentary I Am Chris Farley tells not only how Farley's fame got the best of him, but just how deeply and naturally talented the late actor was. The trailer was released exclusively on Buzzfeed on Monday afternoon and the results are heartbreaking. Colleagues and friends like Christina Applegate, David Spade, Molly Shannon, Dan Akroyd, and Lorne Michaels discuss Chris Farley's life both in and out of the spotlight. The picture that's painted is of a sweet, tender, wonderully funny human who got in way over his head with substance abuse.

It's not just the testimony of Farley's friends and family that sink so deeply, it's also the footage of his work that really hit home for me. Growing up, Chris Farley had a huge influence on my own sense of humor. I watched Saturday Night Live religiously as a kid and I remember quoting Matt Foley sketches at the dinner table in tears with my sister. Needless to say, I will be tuning into I Am Chris Farley when it premieres on Spike TV on July 31... with plenty of tissues on hand.

Here are the most tear-jerking moments of the moving trailer:

When Bob Saget Asks This

"Everyone cries through this, right?" Right.

When Christina Applegate Explained Why He Was So Beloved

When Tom Arnold Explains This

"He was this boy that wanted to do good. But then there was this other side of him... his whole life was this constant battle."

When Dan Akroyd Talks About The Limits of Fame & Addiciton

"Thinking that you have the physical capacity to handle it, which you know, you maythinkthat you can handle it."

When Bob Odenkirk Spoke Truthfully About The Pains of Comedy

When David Spade's Face Says It All

"It comes up in something in my mind every day. And I think it will forever."

When There Is A Brief Glimpse Into Chris Farley's Childhood

It's clear his funny side was always there.

When Lorne Michaels Summed Him Up In Two Words

Michaels noted that Farley was, "Infuriatingly talented," which is why the loss of his presence is still felt so deeply.

It's clear that I Am Chris Farley is going to be an emotional ride — it will be as joyful as it will be somber, and it will most certainly make me remember how much I still miss Chris Farley.