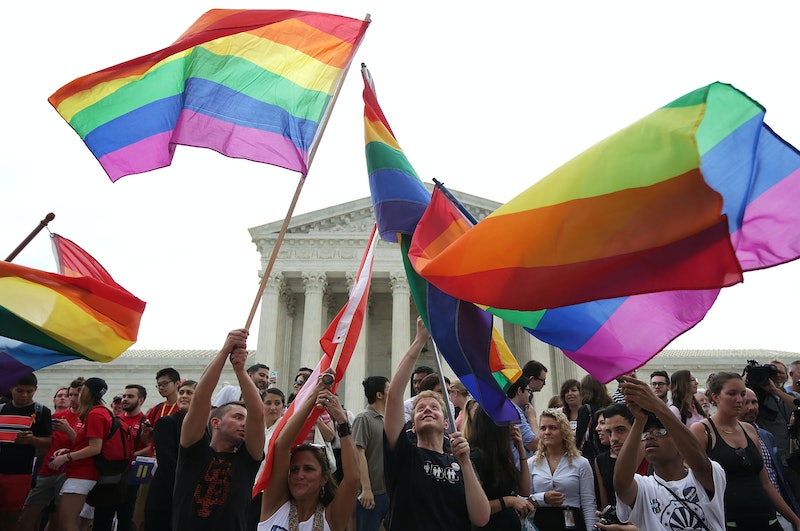 On Friday, the U.S. Supreme Court ruled that it was unconstitutional to ban same-sex couples from obtaining marriage licenses and afforded them the same privileges as heterosexual couples in a momentous decision that has since been both celebrated and derided by LGBTQ opponents. With the doors now opened, a bevy of new arguments against the gay marriage ruling has arisen that could further complicate the matter going forward, should certain radical parties have their way. As the flawed party lines begin dropping left and right, how do you navigate the waters and respond appropriately and, more importantly, in a factually accurate way?

With approximately 1.6 million tweets about the topic in the past week alone, it's a safe bet that anyone with an Internet connection has encountered some sort of nasty argument in response to the SCOTUS ruling. Whether it was a forwarded chain email from a displeased aunt or uncle, a sub-tweet that set teeth on edge, or an influx of hate mail in a Facebook inbox, the story remained largely the same: The decision was bad and you are bad! (Or you know, something like that.)

Some of the most widely circulated arguments came from those in the public eye, such as First Baptist Dallas megachurch pastor Robert Jeffress, who wrote in an op-ed on Friday:

The reason for the drop in the heterosexual marriage rate is clear: if marriage can be redefined to include any and every relationship, then why bother to marry at all? Anytime you counterfeit something, you cheapen the value of the real thing, and gay marriage is "counterfeit marriage."

In his defense, Jeffress pointed out, "Heterosexuals have also been cheapening the value of marriage for years through adultery and divorce," but that didn't justify lifting the ban on same-sex unions. In one fell swoop, Jeffress, like so many before him, unknowingly pointed out the ludicrousness of his own arguments.

Jeffress' arguments aren't the only ones floating around that need responses either. Here's how to address the ones that so many anti-LGBTQ advocates have been pumping into the mainstream channels of late.

1) "SCOTUS Can't Make Laws — That's Not Within Their Power!"

You're right: The Supreme Court can't make laws. But then, that's definitely not what they did on Friday. The simplest definition of what SCOTUS actually can do is found in our own Constitution. Stated in Article III, section 2:

The judicial Power shall extend to all Cases, in Law and Equity, arising under this Constitution, the Laws of the United States, and Treaties made, or which shall be made, under their Authority.

In layman's terms, this basically means that SCOTUS has authority to rule over all cases presented, including but not limited to instances where the United States itself is a party (i.e. someone is suing the government), and constitutional petitions, such as the recent Obergefell v. Hodges. By accepting Jim Obergefell and his fellow petitioners' challenge, the Court agreed to hear their argument (which alleged that the ban on their rights and licenses was unconstitutional) and decide whether their suit had any merit — which they did.

On Friday, the Court, in a 5-4 decision, ruled that the plaintiffs' rights had been infringed upon and that those who were impeding them couldn't legally continue on their set path. No new laws were created in the process, the Court simply upheld what was already in place under the Constitution.

2. "This Should Have Been Voted On By The People! Don't Let The Government Decide For Us!"

Here's the gaping flaw in the argument: From the very beginnings of this country, sure, you could argue the founding fathers wanted to release the people from the bonds of a dictatorial government, but they certainly didn't want the herd mentality to have a say in any of the legislative process. Thomas Jefferson himself was famously known for touting, in his first inaugural address in 1801:

Bear in mind this sacred principle, that though the will of the majority is in all cases to prevail, that will, to be rightful, must be reasonable; that the minority possess their equal rights, which equal laws must protect, and to violate would be oppression.

In a later missive to Pierre Samuel DuPont de Nemours in 1816, Jefferson expounded on that principle, declaring "the majority, oppressing an individual, is guilty of a crime, abuses its strength, and by acting on the law of the strongest breaks up the foundations of society."

Individual rights are not subject to a public vote; a majority has no right to vote away the rights of a minority; the political function of rights is precisely to protect minorities from oppression by majorities (and the smallest minority on earth is the individual).

When even your heroes believe that human rights should not be an issue on which the public should be allowed to foolishly (and generally ignorantly) cast their ballots, you'd better believe that it's a bad idea.

3. "Marriage Is A Religious Institution! Stay Out Of Our Churches And Stop Trying To Convince Us To Marry Gays!"

Two things: 1) It's literally not, and 2) No one wants to get married in a church that hates them.

Most importantly, marriage is a legal contract between two individuals in the eyes of the law, not necessarily just a coupling in the eyes of a benevolent deity. If marriage were simply a religious institution, we wouldn't have to trek down to the hot, stuffy courthouse to fill out government paperwork and pay a ridiculous fee just to obtain a license to do it, we could all just hold hands on a mountaintop and be done with it.

The legal bindings that come with an certified marriage are almost innumerable. But more importantly, they signify to anyone who needs the authorization that two people are legally connected and able to share such things as tax filings, spousal health benefits, and legal and shared custody over any children they may have. Without those things, the system falls apart. But you know, if you want to have a beautiful ceremony at a church altar as well, that's totally cool too — no one's going to stop you.

4. "Religious People Will Now Be Discriminated Against! Businesses Can Be Unfairly Treated Under The Law!"

No one — okay, almost no one, because I'm sure there are some crazy people in a van somewhere in the middle of Death Valley waiting to start discriminating against basically anyone — wants to deprive you of your religious liberties. They're part of what this country was founded on. But if history is any indication, religious folks still have the right to lobby for protection against discrimination or any infringement on their individual rights, as has been proven time and again (and look, people will back them in their complaints and even donate almost a million dollars to them in the process).

More importantly, if recent SCOTUS rulings have shown us anything at all, it's that the government has no problem issuing corporations the same rights as an individual when it comes to religious liberty. Just look at the Hobby Lobby ruling from last summer, when SCOTUS ruled the craft store chain had the right to bar employee coverage for certain types of birth control because it went against their religious beliefs on abortion. The University of Notre Dame also scored a big win on that front, despite the fact their case was considered reaching (they wanted to bar third-party birth control coverage as well — meaning that even though they weren't involved with the healthcare exchange process, they didn't want their employees to be having sex, those naughty people).

With a host of religious protection laws either already on the books or soon to be passed, those religious among us really shouldn't bend to the fear-mongering coming from their party leaders. (Sorry kids, you missed the mark.)