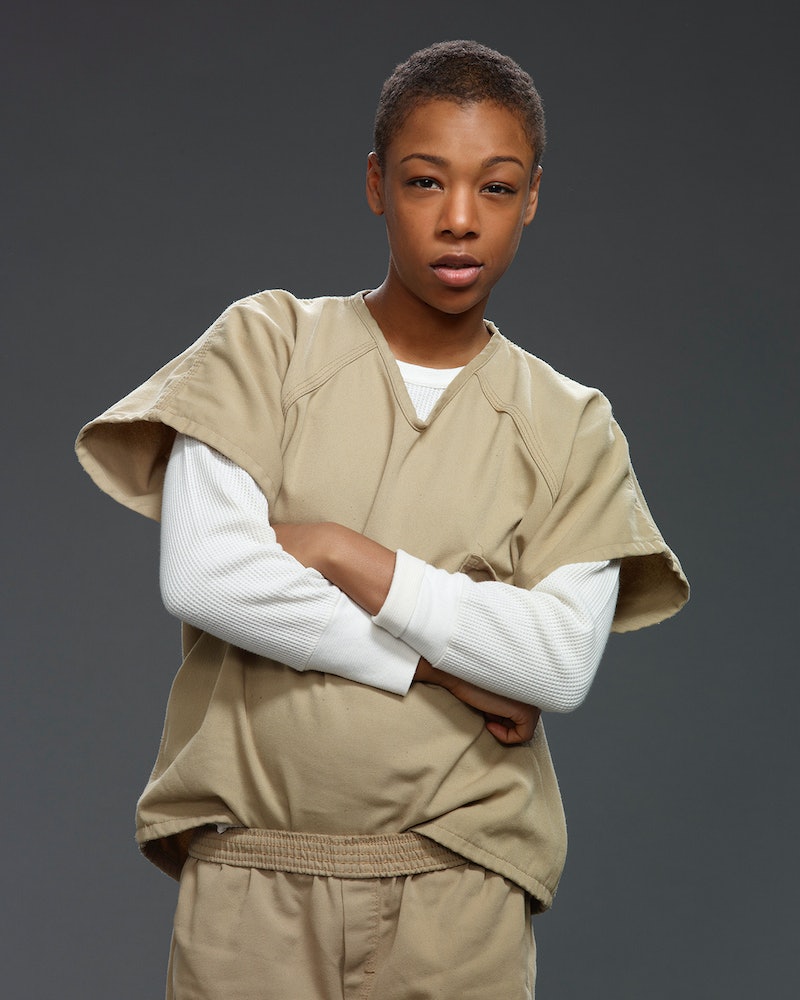 I'm basically obsessed with every Litchfield inmate on Orange is The New Black, but Poussey might be one of my favorites. From the beginning, she's been incredibly intriguing. She's intelligent, she's motivated, and she's genuinely kindhearted to her fellow prisoners. And her friendship with Taystee? Adorable. If I was in prison, I'd definitely want Poussey on my side — and her backstory is absolutely fascinating. Unfortunately, we didn't get a ton of that backstory in Season 3, but we saw a bit in Season 2. And while OITNB has painted a pretty good picture of who she was before she was in prison, they haven't explicitly answered one very important question: How did Poussey end up in prison on Orange is The New Black?

The good news: The show has dropped a lot of clues that could help us figure out what her story is. She's so much more than the hooch queen, y'all, and she proved it with how she convinced her friends to take Soso in after her overdose. Poussey absolutely has a great heart, and her story is one that needs to be told — even if satisfying my curiosity is my selfish side benefit.

(And for the record, Netflix, if you're interested: We need more Poussey in Season 4, please.)

In the meantime, here's what we know:

She Grew Up As A Military Brat

Since Poussey's father was in the military, she traveled a lot with her family. During the flashbacks, we saw that Poussey lived in Germany and was so immersed in the culture that she spoke German. Pretty impressive, right?

She Had A Broken Heart

Although her family accepted her being a lesbian, her girlfriend, Franziska, wasn't so lucky. After finding out that Poussey was dating his daughter, Franziska's dad — who also happened to be Poussey's father's boss — sent Poussey's family packing with a reassignment to the United States.

It Could Have Something To Do With Drugs

It's hinted that Poussey's in prison for dealing marijuana, which would totally make sense. Poussey's too kind and too smart to do anything that could have endangered anyone's lives, and something as simple as dealing pot is pretty easy for even someone like Poussey to fall into.

Or Maybe It Was Weapons?

After Franziska's father was a giant bigot, Poussey pulled a gun on him. Nothing happened (thanks in part to Poussey's dad diffusing the situation before it got worse), but maybe it was a hint at something bigger? Hopefully, OITNB eventually gives us an answer.