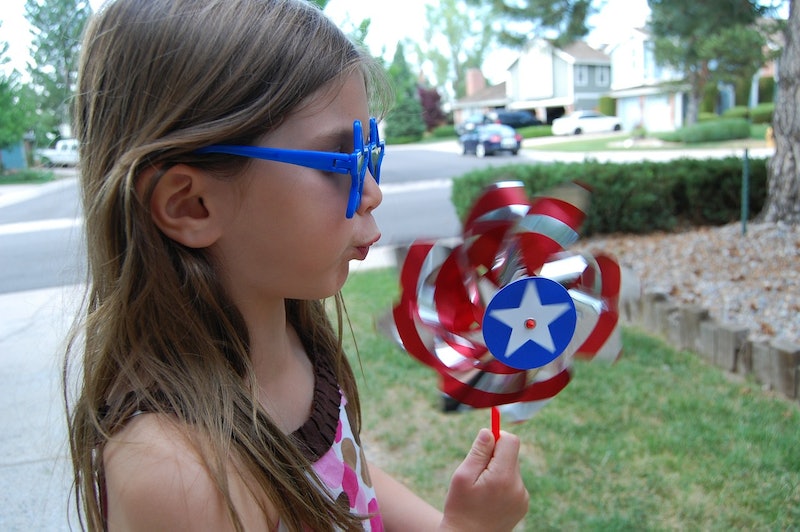 You know how doing things that were fun as a kid kind of lose their fun after you have to get a job and be a legit adult? Yeah, me too. But there are a few things that will always be fun — including the things we used to do as kids on Fourth of July. Man, remember how seriously cool Independence Day used to be? We had no worries, and our only focus was having fun and parking it just in time to see the fireworks. Let’s try and get some of that back this year!

For me growing up in California, Fourth of Julys were always sun-filled parties at the beach or the backyard. Those were good times. As a kid, your main objective for the summer was to just chill and hang out with your friends, and forget all the math you learned during the school year. And, of course, July 4 was special in that you got to wear special colors and eat tons of delicious food, and maybe hold a sparkler or two. Celebrating the holiday was always the highlight of my summer (besides my July birthday).

But it’s not the same now that I’m an adult. I mean, it’s still fun, but I definitely wouldn’t mind bringing back some of the stuff I did to celebrate as a kid. Here are some of the things I miss most.

1. Be at the beach all freaking day

When I was a kid, we spent many a Fourth of July holiday at the beach. And I would be in the water basically the whole time. Did I care that the water was 55 degrees? Nope. Or that the waves were bigger than I was by about a foot? Are you kidding, that was the best part. And even if I had to come out of the water to eat or stop my lips from being blue, I was still making sand angels, or building sand castles, or looking for polished beach glass. And where I grew up, the fireworks were shot off from the beach, so I literally used to spend all day by the sea.

Y’all remember rocket pops? Or were you more of a patriotic Rice Krispies treat kinda kid? Now as adults, we might be more interested in some red, white, and blue drinks, but when we were little it was all about the festive treats. Cookies, cakes, cupcakes, candies — anything that could be red, white, and blue was, and we consumed it all... much to the ire of our parents as we ran around during the fireworks on a sugar high. And yeah, as adults we feel like we have to be healthy because it's good for us and our stupid metabolisms and stuff — but a cupcake ain't gonna kill you.

3. Do Fourth of July crafts that only hung on the fridge for a day

Even though school was out, it always seemed like we made at least one Independence Day-themed craft around July 4. I went to craft camp in the summers sometimes, and we always did red, white, and blue tie-dye t-shirts, or painted pasta to make the American flag. But like, Fourth of July is only one day (maybe a weekend, if you’re lucky), and then those crafts went in the trash, or into mom’s project box. You never saw it again, because you just made something new the next year.

4. Have an all-kids block party

I grew up on a cul-de-sac my entire childhood, and summer was essentially just one long gathering of neighborhood kids. But Fourth of July was like a mini-block party for us. Because our parents were busy hosting holiday parties, it was easy for us to move from house to house while they did adult stuff. Plus, it was a perfect time to ride bikes in the street, play baseball, or build forts on the front lawn while our parents couldn’t scold us.

5. Watch the fireworks with your parents